Because I Could Not Stop for Death: A Wake for the One-Dimensional Offense

Share All sharing options for: Because I Could Not Stop for Death: A Wake for the One-Dimensional Offense

Because I could not stop for Death,
He kindly stopped for me;
The carriage held but just ourselves
And Immortality.

- Emily Dickinson (Because I Could Not Stop for Death)

Among other accomplishments, Emily Dickinson (1830-1886) was known to be a patron of sporting enterprise.  It's no stretch then to imagine that with gentle stroke and patient verse she foreshadowed the demise of the one-dimensional offense.

As we ebb closer to All Hollows Eve, and the beginning of the end in the national championship race, it's a perfect time to look to literature to explain our on the field dysfunctions.  Who says football fans don't like poetry? 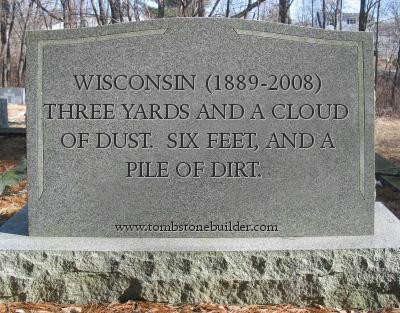 We slowly drove, he knew no haste,

Sounds like Woody Hayes and the "three yards and a cloud of dust" mentality.  Brutish simplicity, unimaginative precision.  But I think Emily Dickinson might have been talking about No. 12 Ohio State's Offensive Coordinator Jim Bollman who put half of Ohio Stadium to sleep in a 16-3 win over Purdue, who should probably stay in the frozen chicken business.  (A Purdue spokesperson informs me the university has no affiliation with Perdue Farms and asks that I provide the following link so there's no confusion).  First down: run up the middle, short gain.  Second down: run to the side, short gain.  Surprise, it's third and long.  Why don't you try a throw now?  Surely they won't expect it.

And I had put away
My labor, and my leisure too,
For his civility

It's a good idea to spend all of spring practice and summer camp priming for potency, only to hold back in August and September.  Or maybe some offenses really do give it their all, but simply don't have the talent to execute.  Dickinson might be referring to Michigan and Rich Rodriguez's hopelessly inaccurate pass attack.  Nick Sheridan went just 8 of 16 for 65 yards in the Wolverine's 13-10 loss to Toledo, who went into the Big House with a 1-4 record, having lost to illiminaries like Flordia International.  Steven Threet was 7 of 11 for 55 yards.  Talk about civility.

We paused before house that seemed
A swelling of the ground;
The roof was scarcely visible,
The cornice but a mound.

Sounds a lot like Wisconsin failing to convert on third down by running up the middle and getting piled for a loss.  If only they had a passing game.  Oh wait, here's one.  Allan Evridge is back, he throws across the middle, it's...intercepted by Penn State's Lydell Sargeant.  Consider the Badgers buried.

I first surmised the horses' heads
Were toward eternity.

Ohio State's offensive line, anyone?  Built for power, not for speed.  Undone by lighter, lateral fronts.