When Ernie Davis starred for Syracuse in 1961, many of the people cheering for him Saturday would not have extended Davis an invitation to the party they were having that night, simply because he was black. So goes the weird mixing pot that is college football, an amalgamation of otherworldly superstars, rabid fan bases, FOIA requests, and 80 year old legends bonding with 18 year old soon-to-be millionaires. These concepts are played out perfectly in The College Football Book, Volume 5, the latest oversized and picture-filled publication by Sports Illustrated.

With its classic editorials, SI does a wonderful job of bringing out some of the oddness that makes college football so popular. Some highlights include an Oklahoma receptionist answering the phone during Red River Shootout week, saying, "Beat Texas, Monolith Oil, how can I help you?"  or the fact that Penn State superstar Lavar Arrington would occasionally slap Joe Paterno's butt before team meetings. And then this classic exchange...

The pictures and All-Time lists make this book an all encompassing college football experience. Retro images of Gale Sayers, Joe Namath, and Paul Hornung haunt the pages of this book and remind us that these legends walked on campus, while vivid pictures of Reggie Bush, Cris Carter and Michael Irvin give explosive color to this publication. The All-Time lists are fodder for dorm and office discussion: Is Peyton Manning really the top quarterback of the 90's? Shouldn't Archie Griffin be on SI's All-Time CFB team, a collection of the 26 top college football players of all time? 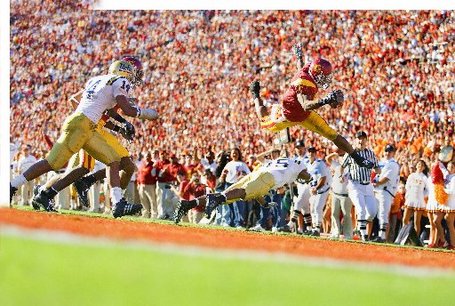 This brand new book, fit for a coffee table or a fan's bookshelf, easily brings together the exclusive ("Werrrrrrre from Ohio, O-H") and inclusive ("Kansas cheerleaders surrounded hunky Oklahoma linebacker Brian Bosworth for autographs") nature of the college game. With eloquent articles, 200 vivid photos, and enough All Time teams to blow you away, SI has created an anecdotal and image filled book that successfully embodies the culture of college football.