Share All sharing options for: Iowa 38, Wisconsin 16: An Overview

Everyone will want to talk about Shonn Greene "bursting" onto the Heisman scene (as if he wasn't already there). If you're a bit more invested in Iowa football, you might even be talking about how QB Ricky Stanzi looked entirely comfortable run-faking and delivering accurate passes on the run. But I want to talk about the Iowa defensive line and the weakness of Wisconsin's pass blocking. In the third quarter, with the score still close at 21-9, Coach Bielema decided he needed to get the passing game going with QB Dustin Sherer. Here are Sherer's statistics from the next four possessions:

Although Sherer's passes were not very accurate, Coach Bielema should not rest  the blame completely on his young QB. The pass blocking was horrific. On one sequence, Iowa defensive end Christian Ballard beat Wisconsin lineman Josh Oglesby for a sack by simply running around him; Oglesby followed this weak attempt at blocking by getting beat on the very next play, leading to an incomplete pass. Two possession later, Iowa DT Mitch King slammed Sherer to the ground mid-throw, leading to an interception. We knew that the Badgers can run the ball; this has been an immutable fact for years. What we didn't know is how weak the usually stout Badger line is when it comes to simple pass blocking. My solution to fixing this glaring weakness? Follow Iowa's lead; run fake to your big backs and get Sherer out of the pocket.

Sweet Play of the Day: Allen Reisner had a beautiful one-handed catch on a Stanzi pass that led to him running 15 yards to paydirt in the 3rd quarter. Reisner would have been thrown for loss, but TE Brandon Myers came out of nowhere to flatten the Wisconsin DB and clear a path for Reisner's jaunt. High school coaches everywhere smiled at the hustle of Myers followed by a perfectly executed block. 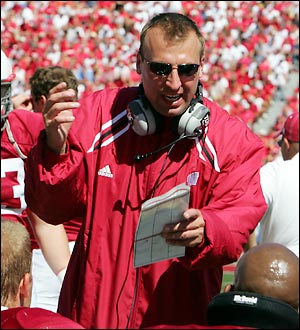