If this was the 1970's, Northwestern Coach Pat Fitzgerald would be preparing for Javon Ringer by growing the Ryan Field grass high and turning the middle of the field into mud. But in the high tech world of 2008, Fitz  is probably spending his time watching film and studying the football strategy espoused by Lake The Posts (LTP), the top blogger for all things Northwestern athletics.

In preparation for the MSU-NW battle on October 11, The Rivalry picked the brain of LTP for the keys to this matchup of the nations #27 and #31 teams. Who will man up and stick Ringer? Will MSU overlook this game because of its disrespect for the Wildcats? Can Northwestern's spread wear out the Spartan secondary? LTP speaks...magnanimously.

Lake The Posts, thanks for coming over to The Rivalry, Esq. Get comfortable, because we won't use our law school skills to confuse you and we won't attack your 2007 posts like BGHP.

No worries. The last I checked it's not against the law to fire up the Hawkeye fans, right?

Northwestern is 5-0 and no one is giving the Wildcats any respect. How will NW quiet the yapping hyenas of the media and the blogosphere? Is the Michigan State game next week a must win?

Simple. Like everything else, winning takes care of most of it.  I actually believe the  blogosphere, sans Hayden's boys up in Iowa and the reliable CFB media sources, are actually spot on for the most part.  As for the Sparty game, I guess it depends how you look at it.  Considering I had us at 8-4, it is not a "must win" relative to meeting my expectations.  However, now that we've finally cleared "the streak" (undefeated in non-conference for first time since 1963) the opportunity exists to get the baseline of the program to a new level.  Considering the Cubs and Sox are in the postseason, it is tough to clear through the sports media clutter in Chicago.  Attendance has been abysmal and steadily falling since 1998 despite the fact we're having the most successful decade in a century.  So, relative to building "Fitz' program" it is critical.  We finally got a 3:30 ET game for Sparty and it is a rare chance for us to create some noise and close the deal with some marquee recruits to help make an already solid recruiting class fantastic. 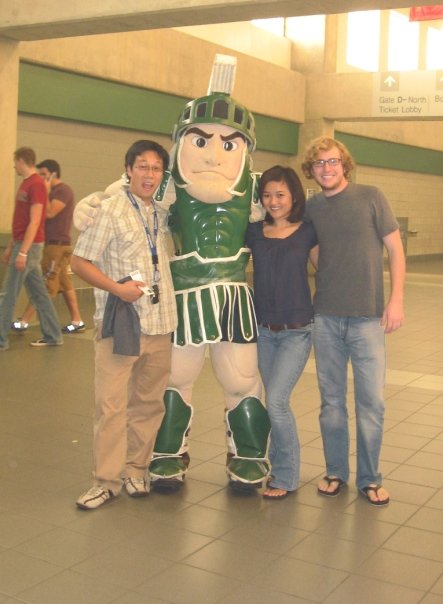 Sparty is so non-chalant about the NW game that he's hanging out in the Breslin and carousing with students...

A couple of years ago, I got pulled over in Winnetka for going 24 mph in a 25 mph zone. Can traveling Spartan fans expect the same kind of intentional discrimination from Northwestern cops and fans this weekend?

Truth be told most Cats fans are not big Michigan State fans.  Cut and paste my recent pre-Iowa game comments regarding the respect card, but we're 5-4 against Michigan State since '95, yet they act as if we don't belong on the same field.  However, relative to the CFB landscape, NU fans are likely the tamest in BCS conference land.  The flip side is NU fans are treated with open arms in most Big Ten venues as they think "win"... and there is nothing as fine as wearing purple on the road and walking out with a win.

What is your best memory of a Spartan/NW game?

Wow.  Just did a post on how I believe this is one of more entertaining series in the last 20 years - both good and bad. We rarely ever win big against a Big Ten opponent, so I'm partial to the 2005 blowout win (49-14), however this is a no-brainer.  The first game I ever took my wife to was the 2001 ESPN Instant Classic.  The last 5 minutes played out like this.  MSU TD on a punt return. Zak Kustok-led 4:30+ TD drive with less than a minute to go.  MSU returns ensuing kickoff for a TD.  Kustok throws a Hail Mary which is caught to setup a near 50-yard game winning FG as time expires. Cats win 27-26.  Got my wife into the Cats hook, line, sinker.

Do you expect Ryan Field to be sold out on October 11?

I do. But it won't. By a lot. We seat nearly 50,000, yet early estimates for the game are in the mid to high 30,000s. Pathetic. Infuriating. Embarassing.  I just bought a block of 50 tickets and have recruited as many friends as possible for the first ever LTP tailgate.

What kind of defensive formation will Northwestern use to stop the whirling dervish that is Javon Ringer? Which Wildcat defenders are key to slowing Ringer?

I expect us to play like most teams will play Sparty.  Bring 8 men in the box and get on the DBs to be ready every single play to not have a letdown and give up the big play.  He's going to get his 40+ carries and his 175 yards.  The key is to make sure our DL gets off their blocks much quicker then they did against Iowa.  Our defense has been fantastic, but the run defense is the weak spot.  Most NU fans don't recognize our team as we expected to be putting up 40 and hoping to give up 39.  New DC, Mike Hankwitz has instantly turned us into one of the nation's top scoring defenses and our guys are bringing hits like we've never seen.  There is a passion and fire that we all hoped would be there as our head coach, Fitz played and now coaches with that same tenacity.  I'd key on DT John Gill who is very talented as he'll need to win his 1-on-1 wars, but I expect schemes to double him up, which leads me to watch LB Malcolm Arrington who has been a menace in the middle.  We simply cannot give up any big plays to Dell at WR.

How will Bacher and Co attack the strong Spartan defense? Will Coach Fitzgerald mix run/pass equally?

The offense, as mentioned above, has been an enigma.  We haven't come close to putting a full game together yet, which I suppose is encouraging considering we're 5-0.  I'm wondering when Tyrell Sutton will get noticed as the legitimate WR threat he is.  He has been so balanced in his rushing yardage and receiving yards. We live off the slant and making short yardage passes big plays.  Our depth is fantastic at WR and Bacher looked like Bacher in the second half of the Iowa game.  I'd love to see Sutton get at least 25 carries a game as he continues to get in the 20 range.  Sutton has only had one game in his career when he has had 21 or more carries and didn't get at least 100 yards rushing -and that was this past weekend.  We routinely get to 10 receivers catching passes in a game, so the "spread the wealth" factor is huge. Rasheed Ward has emerged as a clutch receiver in his senior season.

Give me your dream scenario of how this game plays out...

Dream scenario. Let's see. Cats hold Ringer to 60 yards, Bacher gets 500 passing yards and 5 TDs like last year's win over Sparty and the Cats win 49-7.  Realistic scenario? Based on this series, the last team with the ball wins in a high scoring affair.  I've got a good feeling for this game as the late kickoff will hopefully have Ryan Field buzzing.