Like It Or Not, I'm Rooting For Ohio State to Get Back to the National Championship Game

Share All sharing options for: Like It Or Not, I'm Rooting For Ohio State to Get Back to the National Championship Game

"I lived my life like a burning man
and I won't get enough until my legs are broken."

Admittedly, I'm a little fired up -- having returned to the land of overnight frosts in an acid reflux induced state of excitement.  It happened as I sat on the plane, halfway through a good paperback and my second Heineken.  As I looked at the exit row release diagram, and a slightly hilarious outline of a figure stepping out onto a flaming wing -- with the obligatory bold red "X" signifying (the apparently not obvious) undesirability of said action -- I realized something paramount: I want Ohio State to make it to another national championship game, even if they don't deserve to.

So what?  You say.  You're a Buckeye fan.  Of course you community college, cookie cutter home corn-holes think your retro Range Rovers can play with the speed.  It's not that simple.  In fact, I've spent the last -- how long has it been since September 13th -- five weeks droning and dribbling on about why the Buckeyes don't have any damn business playing for the title.  Could you blame me?  After becoming national pariahs with consecutive NC flops, and getting out of a cold swimming pool in front of the hottest girl at the hotel (USC), the thing -- I swore -- I wanted most was the solemn opportunity to bow out of the limelight and regroup.

I was lying to myself, and I realized it when I locked eyes with the burning man.  It probably started sometime before the flight.  Likely the moment I pulled up the newly minted BCS standings on my laptop in the airport concourse and saw Ohio State had wondered up to No. 9.

"What in the world is this team doing up in the Top 10?"  They're freaking soft, I thought to myself.  It was only on the plane that I knew: they're watching the burning man.  "Who?"  You ask.  The burning man. 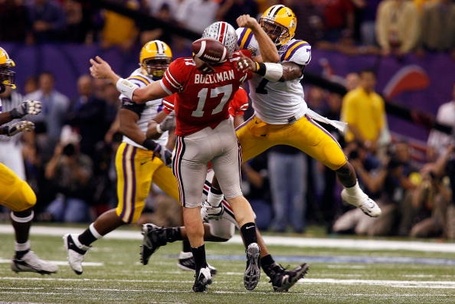 You've got no one to blame but yourselves.

It's every team ahead of us I'm referring to.  Every cripplingly deserving, innovative, complex, efficient outfit in the mix.  It used to be Missouri.  Man, didn't they look sharp on August 30th beneath the golden overhead lights of the Richard Jones Dome?  Who would have guessed they barely had a fuse.

Florida, too.  So what if the Gators could have shown up a few weeks back wearing slippers and still out run Les Miles and his passive-aggressive post-game interview marathon?  They got beaten by Ole Miss.  Ole Miss.  Even the name sounds like a skinny Bourbon Street madam in fishnet stockings.

And don't get me started on USC.  Oh yeah, they ponied us into submission.  And seven days later got spooked and splintered by an Oregon State team that lost to Stanford.  (Both of whom, by the way, were tackled by Mountain West competition).

Yeah, I'm saying it.  I'm tired of the secondhand smoke.  Sure, Ohio State doesn't show up sometimes.  Neither does your team, Athens.  So go on, talk about your competition, the pedigree of your conference.  Struggle mightedly to take down Kentucky, or South Carolina.  Take it into overtime, big boys.

Just remember, when you lose (and you probably will), and that officious bleeding water buffalo struggles up onto South Beach to take its dying breath on January 8th: you've got no one to blame but yourselves.

Remember that as you're watching Ohio State get blown out in the national championship for the third year in a row from a sticky stool at the neighborhood sports bar.  As Texas, or Alabama, or (gasp) USC is running the tight ends up the middle against the Cover 2, I'll be there in the stands.

And you know what.  I'll be smiling.  Okay, not smiling -- but at least grinning a little.

Because you're not there.  You're at home.  Sitting on your ass eating Pizza Hut chicken wings.  Watching my team play for the crystal.

The burning man knows the truth: at season's end there are only two teams that matter: those in the Game.  Everyone else, your Rose, Sugar, and Orange Bowlers, are predestined to play for half-baked glory, new iPod Touches, and next year's pre-season rankings.

Faced with that reality, I'm drinking the Kool Aid.  From now on, I'm rooting for Ohio State to fall backwards into the national championship.

Anything else (I'm convinced) would be failure as a fan.

Don't get me wrong.  The Buckeyes still don't deserve Miami.  Not after pulverizing Michigan State at the line.  And not (presumably) after upsetting Penn State (yeah right) to capture the Big 10 crown.

But your team -- the one who gets you all hot and bothered when you look at their offensive statistics; the one who's ranked eighth or better in the first edition of the standings -- will deserve it even less if they can't win out.

Until they do, I'll be boasting my frequent filer miles.  And scooping up your hotel reservations when you cancel them.

Because, you see, I'm a Buckeye.  And that's just what we do.