Share All sharing options for: Part 1: Who should the Big 10's twelfth team be?

The Big 10 football conference has been behind the eight ball lately in the "chic" ratings of college football. Proof? The once proud mantra of "three yards and a cloud of dust" has been left in the dust, while the Midwest's Best lack a championship game with the added capacity for more publicity and greater profits. The Big 10 Network has been called a boring profit killer and the conference leans awkwardly with its prime number of 11 teams; radically balanced, unclear, and unlike the split SEC and Big 12.

So in the spirit of clearing up the Big 10's problems and inequities, I begin this two part article by discussing the possibility of the Big 10 adding a 12th member.

Should the Big 10 add another team in its football conference? Let's start with the positives.

The negatives to adding a team: 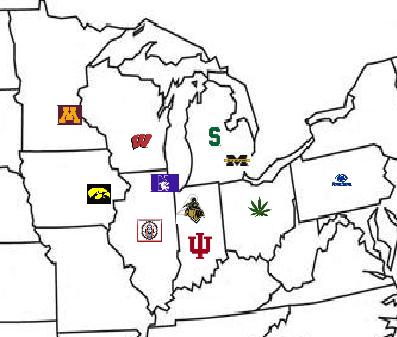 I spent way too much time on this, compliments of Paint.

Pittsburgh Panthers: Dan Marino, Tony Dorsett, one of the greatest college defensive lineman of all time in Hugh Green...I'd say the tradition is there. The football hasn't been spectacular, but the recruiting ground is fertile (Pittsburgh Catholic Central) and the Stache has fashioned himself a hard-hitting team that slammed into Iowa's bullies and came away with a win. Geographically and economically, Pitt is a true Midwestern city with its roots deep in blue collar work. Is it a real possibility? Not yet - Pitt loves its Big East basketball rivalries, but the Big East football conference always feels like its on the edge of imploding and Delaney could sweep Pitt into his money making venture called Big 10, Inc.

West Virginia Mountaineers: Unfortunately, this was a perfect fit before Ann Arbor stripmined the Mountaineers of its head coaching stars. Not only is Morgantown between State College and Columbus, the Big 10 would have inherited viciously loyal fans, sell out crowds, and that certain Midwest/Appalachian flavor which has been referred to as "hick." WVU has been a legit football program for years, always able to bring in good talent. Pat White v Terrelle Pryor...we can only dream. Now the hate runs too deep for the State of West Virginia to allow Delany anywhere near this program.

Notre Dame Fighting Irish: Millions of dollars from NBC have made this idea impossible, at least for now. But if you really want Notre Dame in the Big 10 football conference, just pray that ND has about five straight losing years. A streak of losing Irish seasons could inspire the Rooster to drop the Irish, who would presumably crawl over to the Big 10. God knows, no campus fits better geographically, no team has more rivalries, no colors inspire more emotion (hate) and no team's coach can recruit so well after a 3-9 losing season.

Stay tuned for Part 2: How would a restructured Big 10 look?