It's Called Defense, Morons, and We'll Show You How To Play It

Share All sharing options for: It's Called Defense, Morons, and We'll Show You How To Play It

"No Man's Land is pocketmarked like the body of foulest disease and its odour is the breath of cancer...No Man's Land under snow is like the face of the moon, chaotic, crater-ridden, uninhabitable, awful, the abode of madness.  Hideous landscapes, vile noises....everything unnatural, broken, blastered; the distortion of the dead, whose unburiable bodies sit outside the dug-outs all day, all night, the most execrable sights on earth."

I want to make one thing clear: I had a damn good time watching Ohio State and Penn State trade blows on Saturday from my nosebleed seats in the south stands.  It was a game that -- as one associate poignantly observed -- was almost exclusively played between the 30 yard lines: turning the redzone into a literal no man's land: an estuary of frozen turf blades, naked shadows, and the cool distant crunches of pads popping at midfield.  It was a phantom desert -- a negative tour de force that would make a British war poet proud.

I ripped my vocal chords out screaming, pulled a courtesy hand towel into threads out of nervous contentment, and in the end, was strangely satisfied.  Yeah, I'm a Buckeye.  And I enjoyed a freaking great football game. 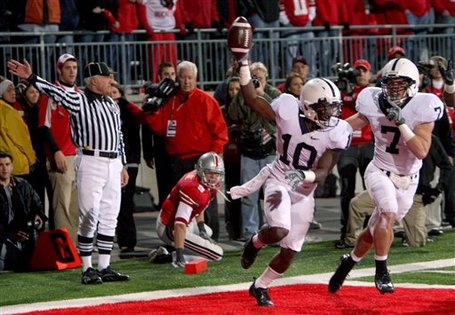 Saturday's heavyweight bout was a fight to the finish.  For some conferences, that means the 8:00 minute mark in the first quarter.

You can imagine my surprise then, when I woke up the next day to discover some members of the mainstream media had a slightly different take.

But Dienhart wasn't the only one to dismiss the Big 10 for its allegedly vanilla play.  Chris Dufresne at the Los Angeles Times summed the anti-Midwest sentiment up in his "Big Ten is in a Boring State" feature.

Calling Saturday's simmering stalemate "boring" is like calling chess dull because you don't understand how it's played.  You see hands lifting pieces a few squares at a time, I see a decisive, tactical, mind-game with shifting spurs of error and advantage.

Fortunately, not all members of the media are shallow.  As Mark Blaudschum at The Boston Globe offered "The Nittany Lions' win in Columbus was an old-fashioned turf war, with defense dominating, a refreshing change of pace from the point-a-minute production we are seeing in some Top 25 games."

It's called defense, and it's what makes college football frustrating, complex, and spectacular.