Share All sharing options for: Indiana 21, Northwestern 19: An Overview

What Happened: Indiana's defense recovered three fumbles and picked off two passes to seal this homefield upset of the Wildcats. The Indiana front 4 dialed up the pressure in the clutch, holding NW scoreless in the fourth quarter and knocking quarterback C.J. Bacher out of the game with a leg injury. Quarterback Ben Chappell had his best game of the year for the Hoosiers. He may not be fast or athletic like Kellen Lewis, but he stood strong in the pocket, avoided turning the ball over, and threw for a season-high 219 yards. Meanwhile, heads should be hung low in Evanston as the Wildcats played their worst (and most costly) game of the year. Bacher was injured in the second half and lost the mobility which usually makes him effective, while a wrist injury knocked star RB Tyrell Sutton our for the year. A key dropped ball by WR Eric Peterman and the aforementioned five turnovers helped Northwestern pick up its second Big 10 loss.

Let's get technical with: Preseason All-Big 10 DE Greg Middleton and the Indiana D line. The much maligned Indiana defense was last in the Big 10 in ppg allowed and hadn't picked a ball off since week 2 versus Murray State. But Middleton and Jammie Kirlew smashed backup quarterback Mike Kafka on consecutive plays late in the 4th quarter, showing extreme determination and skill. Kirlew used a beautiful spin move to slam Kakfa to the ground and cause a fumble. On the following play, Middleton battled through two blockers to hit Kafka and force a fumble that was picked up by the Indiana defense, ending the game. As Middleton watched the finishing kneel downs, his face was one of happiness...and relief. 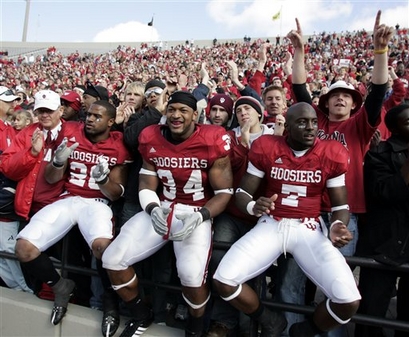 What's Next: Indiana needed this upset like the desert needs the rain (thanks Sade). Bloomington is the home to the Big 10's worst program of the last ten years and this rudderless team was headed towards a winless in-conference record. Now they have a signature victory, three upcoming winnable games, and a bye week. Meanwhile, the Wildcats must crawl into Minneapolis to take on the ranked Golden Gophers. Sutton will be out, but he isn't the key to the offense. Coach Fitzgerald must take all steps to get Bacher healthy or else the bloodthirsty Minnesota defense will pin their ears back against the green Kafka.