Share All sharing options for: The Obligatory Predictions Competition - Week 10

Advantage Filler.  He leads 5-4 on the season.

Crystal Ball Call (pick of the week): Texas by 4 (PATERNOSGRANDDAUGHTER).  And you wonder why we call it the Paternosgranddaughter Bonus.  Five perfect points for the lady.  Texas holds on to a close one 28-24.

Northwestern doesn't have stud RB Tyrell Sutton or starting QB C.J. Bacher for its showdown against the QB killing MN defense. The Golden Gophers have gotten attention for defensive intensity this year – it is well deserved. Big hits on Juice Williams and Curtis Painter propelled Mini to wins over Illinois and Purdue; will Mike Kafka be the next victim?

Northwestern has the fourth best offense in the Big 10 propelled by a signature no huddle.  I was watching them on DVR the other day, and didn't ever need to fast forward.  The emphasis on progression has led to the purple running a cat load of  plays this season (639 -- a perfect one-hundred more than the Golden Gophers).  This game will absolutely depend on their ability to produce sans leadership behind center.  I like the 'Cats to keep it close against the Gophs and their eighth-ranked defense, but ultimately this game will belong to the home team.

This is a "winnable" game for both teams. Each time is literally starving for a victory, although Bowl expectations have been placed up on the mantle to be brought out next year. Purdue has the Big 10's worst offense and Curtis Painter is probably out for this home game. Although Joe Tiller handled the anger issues of Korey Sheets well, it doesn't mean that he's been able to pull the right strings for the offense. On the Wolverine side of the ball, Steven Threet will start and let's hope the TV cameramen in West Lafayette don't show RichRod screaming every time Threet throws a pick. Oh, and would someone tell the Purdue O Line that Brandon Graham is playing like the NFL prospect he is? Don't look for any fan bases to flip out when their team loses – this season has been written off as a year of rebuilding and change.

This might be a bit of an understatement but this season hasn't exactly gone the way Joe Tiller & Rich Rodriguez imagined.  Both the wiz and the patriarch are 2-6, and presiding over offenses that look both brainless and ball-less (Purdue has the 9th ranked engine in conference, Michigan is dead last).  The Boilermakers haven't won in the Big Ten.  Neither has won on the road.  And if you ask me, that's about to change.  The Wolverines, while looking a bit like the cast of Altar Boyz at times, have managed to successfully move the football with the benefit of the screen.  I think their creativity produces enough smoke to get them out of West Lafayette with a shread of dignity -- the same thing I'm taking away by featuring this playbill: 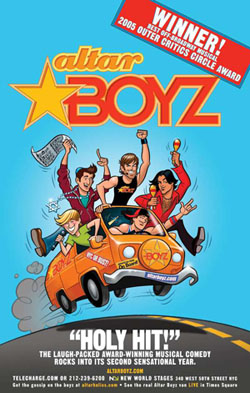 There are four bonafied power running focused teams in the Big 10: Michigan State, Wisconsin, Iowa, and Ohio State. Requirements: Punishing offensive line, stud running back, weak passing game. Has there been a reoccurring theme from the play of these teams? Look at OSU's dominant victory over MSU – the Buckeye defense slapped MSU's O Line in the mouth and stopped the Spartans from creating holes for the NCAA's leader in rushing yards, Javon Ringer. So there it is Wisky D – stop Ringer and win the game. Easier said than done for the Badgers, of course; although they shut down Illinois, they did give up 254 rushing yards to Iowa.

This one is chalk full of intangibles.  Will Wisky continue on the road to redemption, or edge back to perdition?  Will Sparty save face in front of the home crowd?  Both teams are coming off big wins, but MSU was forced to drain a little more of the tank to best its big brother.  I think Bielema has got the Badgers re-oriented: making them particularly dangerous in a nothing-to-lose kind of way.  This one is close, but the better team holds on.

A sober predictor would look at star Chippewa QB Dan LeFevour and the talented offense and figure the MAC-leading Chips will pass and run all over Indiana and its "worst in the Big 10" defense. I would be inclined to agree wholeheartedly, except that Indiana upset Northwestern, shutting down the quick-passing Wildcat offense and showing a lot of grit and effort in the process.  I am not sold on the Indiana offense however; only once has a Hoosier rusher reached 100 yards in a Big 10 matchup this year.

It always irritates me when teams schedule an OOC matchup in the heart of conference play.  Indiana took a serious step forward last week.  Let's hope they don't fall back.

Has the entire Bulldog sideline cleared out of the endzone already? Yeah? Okay. One note about Mark Richt's inspired coaching job last year: I love that kind of motivation. Sometimes you have to mix things up in football, get the players fired up. My JV coach kicked my ass after one practice because he thought I was too soft – Ah Coach Toecar…that really happened. Anyways, this beating made me want to toughen up…after that I relished the hitting.

Here is some analysis for the game – Every Florida strategist knows that when Urban Meyer's offense is clicking, space abounds for the quick dump offs and the misdirection runs. Every Georgia strategist knows how fast Rainey, Demps and Harvin are. So what do the Bulldogs do to stop this game from being a track meet? Georgia needs to run those beautiful sweeps with Moreno early so that Florida defenders can feel a 300 lb man run them over and know it will be a long, hard hitting game. And Mark Richt needs to school the defense into making tackles in space; those dump passes should be three yard gains instead of 45 yard sprints.

Graham is way too into Florida, which really makes me want to take Georgia here.  The problem is the Gators are just too sweet.  They've won 15 of the last 18 cocktail party showdowns.  Since an atypical loss at home on September 27th they've spiked opponents 152-33.  Georgia has shown its weaknesses all too frequently this season. Plus they're coming off a challenging win against LSU on the road.  I say Tim and the gang leave the Bulldogs sticky and shaken.  As for Florida's national championship aspirations, consider 'em stirred.

A classic trap game for Iowa with the hype building for the Penn State showdown. Illinois has been spectacular…and then turnover prone…then spectacular…then turnover prone. Ron Zook's troops have been all over the board for a number of reasons, one being the passing game. Illinois runs high risk passing routes with lots of downfield throws and deep drops, resulting in feast (55-13 over Indiana), famine (17 points, three picks versus Wisconsin), and weirdness (462 passing yards v Mini, five sacks, one pick). Stats and strategy aside, can Illinois stop Shonn Greene from another 100+ rushing yards?

I'll catch this one on Sportscenter.  With my tuner resolutely fixed on the World's Largest Mixed Drinks Melee (see above), I can't promise I'll see too much of this barn burner.  I did happen to catch Illinois's loss at Camp Randall last week, and I have to say, I wasn't impressed with Juice Williams's arm.  Still, the Illini remain the Big Ten's top gainers: nicely executing in both the pass and the run departments.  Shonn Greene and the Iowa offense have looked focused in back to back wins over Indiana and Wisconsin -- they've also had the benefit of an extra week in preparation.  So why do I think Ron Zook caries the day?  Iowa showed weaknesses against a markedly similar Northwestern offense.  If they can't make the corrections JW and his technicolor squad will be all over this one.

UT has dispatched three straight top 10 teams with its "junk" offense (thanks Gary Danielson) and the ability to slow the nation's top offenses. Texas Tech brings its own Heisman contending QB to this calamitous showdown. Sticking to my normal mode of predicting, until the Red Raiders win a key late season in-conference game, I will pick the Longhorns. But holy cow, being a Texas fan this year must be like going clubbing with Colin Farrell: exciting, dangerous, lots of sweat, and always a smile on your face at the end of the night.

Texas Tech plainly doesn't show the kind of systematic running prowess Oklahoma State displayed last week against the Longhorns (they rank 8th in the Big 12 on the ground).  Although their passing game -- led by incumbant extraordinaire Graham Harrell -- has been stellar all season the Red Raiders hadn't faced a ranked opponent, save last week's dismantling of the then No. 19 Jayhawks.  Sorry Mike, you're not in Kansas anymore.  In the last installment of a four week stretch against Top 15 opponents, expect Colt McCoy to pistol whip an ordinary Tech defense, and cement the Longhorn's perfect regular season.