On the Road to Madison

Share All sharing options for: On the Road to Madison

As regular readers of the site know, this half of The Rivalry, Esq. left his Franklin County stomping ground Friday to brave the thin asphalt veins and clear blue skies of the dairy state for No. 12 Ohio State's road challenge at Wisconsin.  In the spirit of Jack Kerouac's On the Road, here's an editorial chronicle of my Madison misadventures. 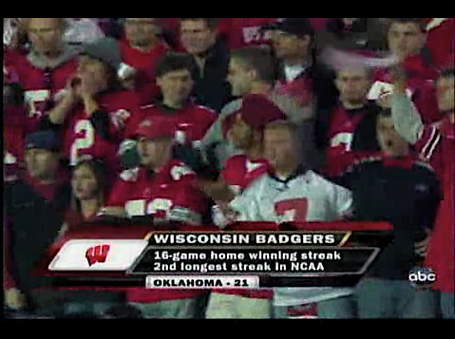 Stuck in the birm near LaPorte, Indiana.  I'm pulled over by the State Highway Patrol for driving 85 mph on the turnpike.  After the obligatory questioning and registration sequestration Officer Hoosier returns from his squad car with a warning slip.  "Go Bucks," he says plainly.  This is undeniable proof that God is an Ohio State fan.

The lake effect.  Just past Gary on the skyway, Chicago's Sears Tower presides over a blanket of industrial plumes and brownfield lots.  The clouds are thick and littered with dark carbon kernels.  I keep the sunroof open, even though the temperature has dropped to a brisk 55 degrees.  Illinois is pulling away from Michigan on satellite radio.  MW attempts to find coverage of his alma matter No. 13 Vanderbilt to no avail.  We settle on listening to a repeat of College Football Gameday on ESPN as we squeeze through a studdering casino of tail lights.  I miss a cash toll just past O'Hare and am forced to sneak through the I-Pass lane.

Two miles outside of Rockford, WI we realize we don't have a prayer of making kickoff.  The Wisconsin sky is purple and distorted like an old tattoo.  We resign the satellite radio to the pregame coverage and the cruise control to 78 miles an hour.  The in dash thermometer reads 49 degrees, forcing us to close the automatic sunroof.

Kickoff at Camp Randall.  We listen to the amplified cantor of the crowd over the Monsoon system as we race towards Madison -- a thin curtain of light pollution on the horizon.  I spot a small blimp hovering over the stadium.

We land on Regent Street in Madison, four blocks from Camp Randall.  The Buckeyes are surprisingly ahead 7-0.  I dock the Volkswagen in the last available spot in a sticky lot next to a temporary beer garden.  We pull forward as far as we can, but the trunk (and its horribly partisan insignia) protrudes out into the public sidewalk.  There's no time to hesitate.  We roll out of the car and into the street, a swirling mass of empty pizza boxes, and no-name band promotional flyers.  A drunk Badger tells me to "F*ck Ohio."  I don't have time to be cute, so I respond with the unoriginal, but effective "Scoreboard."  We jog across no walk intersections, and railroad tracks, Camp Randall's strong shadow guarding Monroe St. like a Blue Jacket soldier.

We're inside, running the lower S Section ramp through the portal.  The stadium opens up in front of us -- the tall decks and grand architraves a parting Red Sea under a dangerously cold sky.  The crowd is feverish, spurred on by Milwaukee's Best Light and salted shelled peanuts.  There's 7:31 remaining in the first quarter.  We huddle into our seats: forty yard line, second row, behind the visiting team bench.  Less than fifteen feet in front of me, James Laurinaitis sits bow-legged, tapping his socks to a Foo Fighters' sample.  The Badgers bring pressure and Terrelle Pryor sidesteps a tackle, and toys with a throw.  There's no one open, and Jaevery McFadden is closing.  Pryor pump fakes, and fawns over to the sideline for no gain, bringing up a long third down. 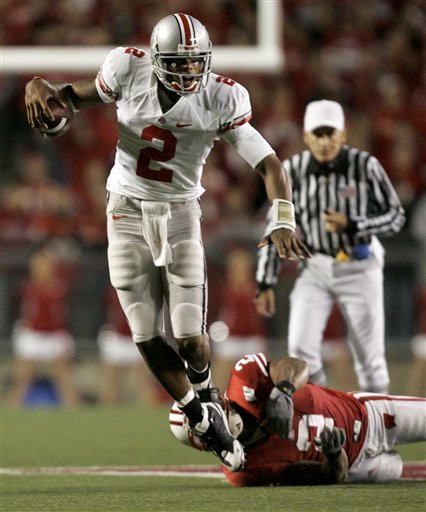 Ohio State's Terrelle Pryor steps out of the grips of Wisconsin's Jonathan Casillas before being forced to the sidelines.

And the crowd is up like fire ants, a deep groan envelops the risers, thundering like the wheels of a freight train at speed.  The roar distorts, then harmonizes, an echoing pool of physical sound that hits the chest and drowns supporting vocals.  I've never heard stadium noise like this.  Pryor shrinks under center, then hikes -- Wisconsin brings another round of pressure, pads pop in surprisingly hollow thuds and the quarterback is taken by the ankles for a loss.  The home fans revel, and Ohio State special teams are automatic at the whistle.

My stomach is complaining.  I haven't had anything to eat since noon, save a small caramel milkshake from a Travel Plaza Dairy Queen.  Wisconsin has tied the game at 7.  I'm struck by the physicality of the line play -- running backs John Clay and P.J. Hill shoot the gap with punishing force and resistance, then stretch out their legs on the fall.  Ohio State doesn't seem to have a formula for the caterpillar onslaught, though the defense is containing the combustion and preventing the bruisers from seeing the secondary.  Tressel lands the ball with time before the half.  I'd like to see points here, but the Buckeye attack has lost its first quarter luster.  Pryor's back in the shotgun, seven step drop, Brian Robiskie is galloping on the post -- they're letting the full line out on this one (a la the 2005 Fiesta Bowl).  Pryor rockets a nice ball over the midfield, it's got the distance, Robiske's short a step, he dives, extends and it's incomplete off his hand.  One play later Tress is back to vanilla, on third and long he puts Beanie down the middle for a short gain.  Here's the punting team.  We're tied at the half.

Wait.  Bielema is gunning the prevent defense.  He's taking advantage of Jim Tressel's predictability, and moving the chains.  Now I'm struck with the vertical precision of Wisconsin's star tight end Travis Beckum.  Time after time, he goes up the middle, and Allan Evridge seems to have a knack for putting the ball where only he can reach it.  The Badgers move efficiently into the Buckeye red zone where a last minute defensive stand forces them to take a field goal.  Still, Wisconsin carries the momentum into the locker room, and a small chorus of visiting fans indicate their frustration with Tressel's laissez-faire approach.

This is what the Big Ten does better than everyone.  The third-quarter defensive stalemate is highlighted by the line play.  Neither team dominates and it's clear this is a square-shouldered match up.  Ohio State's Ryan Pretorius notches a 21-yard field goal to tie the game at 10.

And we're into the Fourth Quarter.  I'm waiting for House of Pain, and sure enough, after a seemingly unrelated sound bite, the familiar horns fire out at the system and suddenly the world is "Jump Around."  I can't help but flex my calves as the student section releases in an elastic freak dance.  Never to be outdone, the Buckeye defensive unit joins in.

This is when I know we're going to win.

Like shifting tides, the momentum swings.  First it belongs to the Buckeyes who move into Badger territory, and for the second consecutive time are forced to settle for a field goal.  Then the incipient Badgers frustrate the Buckeye defense, with a boots in the soil touchdown drive.  They close with 6:31 remaining, ahead 17-13.

The crowd is back, and my stomach acid composition rivals industrial China.  Chris Wells and Terrelle Pryor are conversing on the sideline.  I didn't know it then, but Beanie's advice was prophetic.  "It's a man's world now," he says.

What follows is one of the best clutch drives I've even seen, rivaling Joe Germaine's 1997 Rose Bowl end game performance.  Tressel's efficient and effectively fatal control of the clock, is sweetened by the fragility of the set play.  Ohio State fumbles and recovers twice, first in the backfield, and later, after a Brian "Butterfingers" Hartline reception.

Particularly mesmerizing is the young quarterback's control of the series.

After joining arms with the transplant fan base, and singing Carmen Ohio acapella, we file out of the stadium into the strangely calm Madison night.  I find my Volkswagen where I'd left it, and stop on the way out of town for a cup of coffee.  I take I-90 south to Chicago, and sleep at my girlfriend's apartment in Oak Park.