Share All sharing options for: 11 Things I Want to See This Year in the Big 10 Revisited (Part 1)

Back in August Graham (in a pure moment of unbridled hopefulness) put together an index of 11 Things he wanted to see this year in the Big 10.

As we round the corner into the ides of October and the middle-point of the 2008 regular season I think it's time to revisit Mr. Filler's wish list in reverse chronological order. 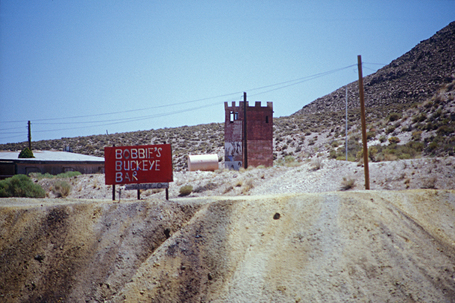 Filler want's Ohio State to show up for once if they travel west.  Franz would settle for a good place to drown the sorrows after the game.  Bobbie's Buckeye Bar seems to fit the bill landfill.

#11 - If Ohio State Makes it to a Bowl Game, I Would Appreciate if they Showed Up

Me too buddy.  The No. 12 Ohio State Buckeyes are 5-1 at present.  Although they face difficult tests, on the road against No. 23 Michigan State and at home against No. 6 Penn State, four of their remaining six conference opponents are unranked making it likely they'll clear the sixth game threshold to bowl eligibility.

Okay, so we're confident we'll see the scarlet land somewhere on the other side of December: where could that be, and will they show up?  I think last week's performance in Madison, Wisconsin is indicative of how Ohio State will perform throughout the rest of the conference slate.  With a wise beyond his years freshman firmly entrenched in the starting quarterback slot and enforcement north/south dimension to the power run, it looks like the Buckeyes are firing on all cylinders.

The best case scenario sees the Bucks sweeping the remainder of the conference slate and landing in the (strangely foreign for the three time defending Big 10 Champions) Rose Bowl Game.  There, they're likely to run back into No. 8 USC.  Although the Buckeyes were soundly destroyed by the Trojans 35-3 in a September 13th disappointment, that team was without the run threat with Chris "Beanie" Wells sidelined, and a cohesive identity behind center.  If Jim Tressel is reacquainted with his Golaith, expect him to play more aggressive power football, wringing the washrag between the tackles.  Although it's too early to tell if the increased potency will have the Trojans confused -- et tu, Brute? -- I'm confident the Bucks will meet their burden of proof by "showing up" in Pasadena.

On the other hand, the worse case scenario for Ohio State involves them picking up anywhere from two to three additional losses, likely against Michigan State, Penn State, and (if we're really playing race to the bottom) arch nemesis Michigan.  Now, the 10-2 (9-3) Buckeyes finish third in conference and land a date to the Outback Bowl in Tampa, FL where they'll hit helmets with (goody, goody) the No. 4 finisher in the Southeastern Conference.  My pick here is this will mean a reunion with (oh sh*t) No. 11 Florida.  Although the Buckeyes are 0-9 against SEC foes and got blasted by the Gators in the 2006 BCS National Championship, I like the way this team lines up against Urban Meyer's swamp things.  Flordia lacks a discernable ground threat outside of their Heisman under center, giving the Ohio State defense the ability to play soft and put extra emphasis on the pass attack.  While I can't guarantee they'll stop the slide against southern gentry, I'm confident the Bucks will at least "show up" on the other side of December.

Since it's hard to embarass one's conference from within, I'll take this to mean a representative showing in out of conference play.  Tim Brewster's sophomore Golden Gophers went 4-0 against MAC, Big Sky, and Sun Belt competition.  While it's not trophy case material, their 5-1 start (including 1-0 in the Big 10) is certainly redeeming.  Consider this wish granded. 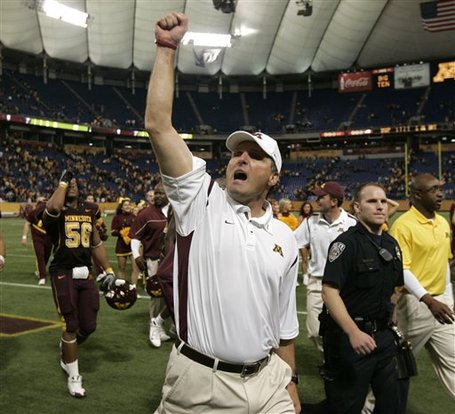 From embarrassment to endorsement, Tim Brewster's Golden Gophers are on their way up.

There's nothing more "heartwarming" than Joe Paterno's grandfather to granddaddy resurgence.  Although, I think what Graham was going for was a continued in house transformation for the Indiana Hoosiers.  Despite a promising 2-0 opening, the crimson and cream are curdling in the midst of a three game losing streak.  With Kellen Lewis struggling on and off the field this one doesn't look promising.

Said like a true Michigan fan.  Okay, here's where we're at.  Early 2008 saw the Big Ten go a respectable 31-9 in out of conference play.  Stacked up against the rest of the BCS universe, we're a competitve third.

But this question really calls upon our ability to discern whether the Big 10 got doused by the underfooted challengers.  Here's the Big 10's record against 1A/FCS Competition: 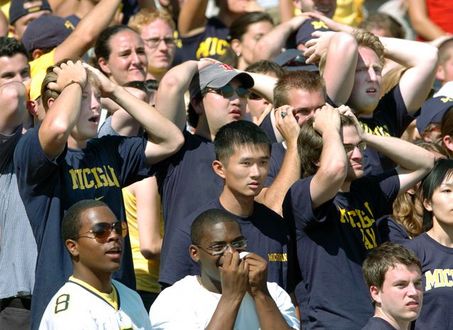 No more of this, at least for now.

#7 - I Want a Wide Receiver to get his Name in the Headlines.

Graham said it best when he identified that "[t]he problems for Big 10 wide receivers are two fold: First...[t]he attitude of run first, pass second does not lend itself to grooming WR's and many teams have moved in that direction.  Second, the best wide receivers according to CFN (Brian Robiskie of OSU, Andy Brodell of Iowa, Eric Decker, Jr of Minnesota, Derrick Williams of PSU, Arrelious Benn of Illinois) all play on teams that may not be able to nurture a breakout season for these talented players."

But what about Eric Decker, Jr.?  Not only does he lead the Big 10 with 50 receptions for 696 yards and 4 touchdowns, he's first in the nation.  That's got to get you some face time, right?

Wrong.  ESPN has made nary a mention of Mr. Decker's exploits.  This one's not looking good Graham.