Share All sharing options for: Why The Big Ten Doesn't Have Any Damn Business in the National Championship Picture

Sure, I'm a wholehearted enthusiast.  But I'm also rational, and that -- from time to time -- leads me astray in the world of competitive ambition.

We've been in denial, my friends -- our cautious optimism a cheap tonic that's clouded our ability to see our conference for what it is, and is not.

I was forced to listen to the fourth quarter of Penn State at Iowa on satellite radio, en route to a friend's cabin in the Hocking Hills -- where I was headed to share cigars, microbrews, and a bonfire with a few friends from my undergraduate days.  Sure, I was bemused when Daniel Murray -- a backup kicker who hadn't hit a field goal since the season opener -- laced a 31 yarder to cement the upset.  But I wasn't surprised.  And I'll bet you weren't either.

The truth is the Big Ten doesn't have any damn business in the National Championship picture.

And that's okay.  Because college football, as the book is written, isn't about superiority: it's about survival.  Doing enough one week to get to the next. 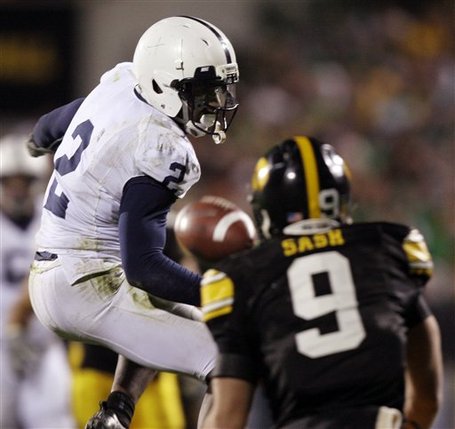 What we've lost sight of in this hyper-inflated race to the top of the polls is a legitimate respect for the game itself -- for the release and tension of fever and failure.  So let's admit it:

1. We don't have an a**hole.  Don't blame us.  We tried to get one: mining Rich Rodriguez up from Morgantown.  But the dude has turned out to be about as menacing as a Parisian waiter.  So, who in the Big Ten carries the "Bad a** motherf*cker" wallet?  This week it's Jim Tressel: who refused to run the clock out on Northwestern.  After faking a punt with seven odd minutes remaining in the Fourth Quarter, he refused to run, opting to play air traffic controller to the tune of a 34 yard pass from Terrelle Pryor to Brian Hartline.  On the next series, he let Todd Boeckman take to the skies -- and finally, with the clock running down, sent Daniel Herron between the tackles instead of taking a knee for seven more.

Unsportsmanlike?  You bet.  And it's about time Tress learned to coach like Pete Carroll and Urban Meyer.  Football is a 60 minute game.  Failure to stop an opponent within those perimeters is a personal problem.  Special mention to Pat Fitzgerald who took his licks like a man.  The Rivalry, Esq. expects great things from the youngest coach in NCAA Football.

4. Joe Paterno's best days are behind him.  Sorry screenwriters, it's true.  Jim Tressel, hardly a force of slight of hand had his superior against the wall just two weeks ago before a fourth quarter fumble let the Nittany Lions escape from Columbus with a win.  Kirk Ferentz was not so forgiving.  We love you Joe, we really do.  But a lot of coaches out there are doing more with less.  Speaking of which...

5. Other teams/conferences deserve it more.  Like the Big 12 and Texas Tech.  The Red Raiders are liquid, energized, and fearless.  They're also little.  Here's a program that's been playing ball since 1925: but hasn't staked a claim to a single national title.  Let's reward innovation by backing David to sack Goliath.