Share All sharing options for: MAC Attack: Explaining the Big 10's Struggles Against the Mid-American Conference

During the four years I attended Miami (OH), I saw many beatdowns of my Redhawks by the likes of Michigan, Ohio State, Iowa, and Northwestern. So it has been somewhat of a shock to see the MAC's success against the Big 10 this year. I know that Randy Moss and Ben Roethlisberger once starred in this Bowl Subdivision conference, but If you had told me that 3 MAC teams would post wins over Big 10 teams this year (the most ever in a single year), I would have called you crazy. Do these huge wins signify a stronger Mid-American conference, flush with spread offenses and teams that don't fear the Big 10? Will the conference of Joe Paterno and Bo Schembechler bounce back next year in match-ups with the MAC and prove its superiority? Was this year's relative success by the MAC a fluke, simply a product of veteran QB leadership throughout the conference?

These "surprising" losses pretty much just show what everyone already knew: The best MAC teams trump the worst Big 10 teams. Of course, this wasn't always true. The Indiana Hoosiers, arguably the Big 10's worst football program in terms of attendance and recent success, schedule one or two MAC schools every year. Before this year's debacles against Ball State and Central Michigan, the Hoosiers hadn't lost to a Mid-American foe since 1977, when Lee Corso blew a home game to Miami (OH). The 2008 Hoosiers scheduled two bowl eligible teams with killer offenses, losing to them both while giving up an exorbitant amount of yards and points. There was nothing overly surprising about those losses: moribund Minnesota teams have lost a couple games to the MAC in the past 10 years, while a mediocre 2007 Iowa team got beat by WMU. 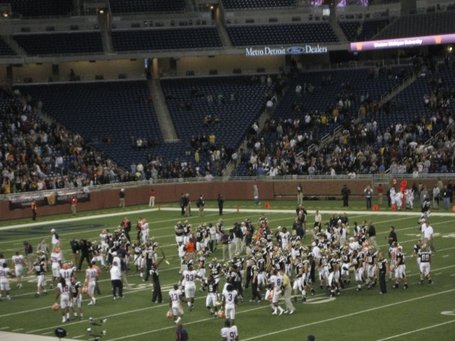 But last Saturday's Bronco victory over Illinois had a different feeling to it. Western looked tougher than the Illini, not to mention totally unafraid of Ron Zook's troops. Vivid examples can be found in Juice Williams getting slammed down time and again on Saturday or the large Western receivers overwhelming Jim Thorpe Award nominee Vontae Davis and the Illinois secondary. If there was ever any question that the MAC can field top 25 teams and compete with the (upper) middle class of the Big 10, that question was answered in 2008. It remains to be seen whether the other Midwest Bowl Subdivision conference can build on this years success, but one word of simple caution to all Big 10 teams: If you see a MAC school with a spread offense and a veteran quarterback, brace yourself...