With its 106,201 (soon to be over 108,000) seating capacity, the Big House enjoys its birthright as college football's most voluminous venue.  But, despite hosting a burgeoning blue sea, Michigan Stadium is a bit, well, boring. 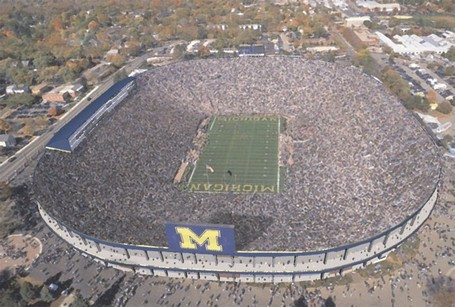 Franz thinks the Big House crowd generates all the emotion of a Bob Ross painting.

I've got to believe that somewhere beneth the semi-submerged, smoltering jungle of painted steel rivets, concrete aisles, and limited portals there's a scuole of spirit -- some distant relic of tradition and fanfare.

But, as CSTV reports on its Battle of the Blogs segment:

Ok, here is one category where I must give the nod to our Buckeye brethren to the south. Sitting inside the 'Shoe during a game is something akin to sticking one's head in a jet engine. When not hurling F-bombs at frightened Michigan fans or spelling other four-letter words such as O-H-I-O with the rest of the stadium like they're practicing for a really easy spelling bee, OSU fans can be a loud, intimidating bunch that turn The Horseshoe into one of the loudest stadiums in all the land.

Michigan fans are very fond of the "key play" cheer by which, during "key" moments of the game like a critical third down for the opposing team, U-M fans -- in unison mind you -- reach into their pockets or purses, withdraw their key chains...and begin to jangle them with all their might. The hope here is that the mere sight of tens of thousands of Wolverine fans shaking their car key against their house key -- over and over again in the stadium -- is enough to cause an illegal procedure penalty for the opponent, either when the sun hits the keys just right and blinds them or from laughing so hard at the lameness of it.

What's the culprit?  It's the shape, stupid.  Michigan Stadium's classic concave bowl sends soundwaves airborne.  (Not convinced?  Harvard's Physcs Department has got my back.  It's not exactly good cocktail party conversation, but here's an essay on the "Effect of Concave Sound Reflecting Surfaces on Speech Intelligibility and Articulation Index.")

And The Michigan Daily confirms:

Sound often evaporates into the air at The Big House, which has a reputation for being a relatively quiet stadium despite touting the nation's largest crowds. Because there aren't many things for the crowd noise to reflect off of, the oval-shaped bowl loses sound...

...In a press conference in September, Penn State wideout Deon Butler said the noise and intimidation factor at The Big House were low for a stadium of its size.

"It's not a super-overwhelming place," he said. "Yes, it's large, and they're supposed to have more people than us, but it's not overwhelming in the sense that it's not as tense as Beaver Stadium. Their fans aren't near as rowdy as our fans."

But what about the rennovation?  Hopes are high that the big bowl's new press boxes will reflect and contain the raw sound.  As UM Faculty confirm, the new cover stands to magnify the total sound output 10-11 decibles (from 100 db to 111 db in the student section), the equivalent of a Van Halen Panama encore.

But compare that to the Stadium that once prompted University of Iowa coach Hayden Fry to complain that the fans were too loud to call plays, and suggest that sound meters be used to gauge the noise level, penalizing the home team for too much volume and you see why the Shoe remains the stentorian sultan.