Calm down.  You knew it was coming.

This entry was suggested to me by a good friend who feared it might be a bit "too soon" to faithfully execute.  Fortunately, The Greatest Rivalry in Sports knows no such courtesies. 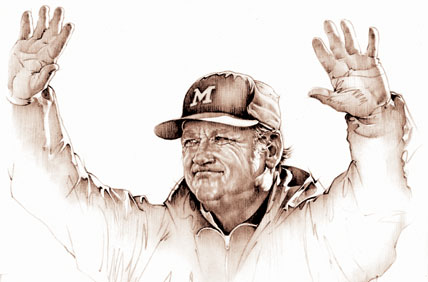 For twenty years (1969-1989), Bo Schembechler was a walking legend on the Michigan sidelines, his iron-taloned visage, down parka, and chrome-rimmed avaitor glasses reminiscent of a State Highway Patrolman.  He was described as "a consummate 'coach's coach,'" with a "superb technical command of the game" and a "fiery disposition," attributes that led him to find success against mentor Woody Hayes in "The Ten Year War."

During his tenure in Ann Arbor, he compiled an impressive 194-48-5 record (.796 winning percentage) and led the Wolverines to 13 conference championships and 17 bowl appearances behind the populist banner: "Those who stay will be champions."

But he was wrong.  After thirty-seven years of coaching a "'remorseless and punishing' brand of football" Schembechler walked away from the game having never sustained a program at an elite level -- and without a national championship.

Schembechler's Wolverines finished the season in the top three only twice.

Perhaps most tellingly, Bo never got past his 1985 second-place finish.  As my friend put it, "Larry Coker has won more championships."

But Bo sure has a lot more friends.