Like you, I've spent my fair share of minutes this morning sorting through the pile of editorials that flowed out of the questionable mechanics of No. 2 Oklahoma's leap of faith over No. 3 Texas to claim the Big 12 South Championship and control of its own championship destiny.  This despite the Sooner's 35-45 loss to Texas on neutral ground in October.

Although the Big 12's seven step "tiebreaker" has rightfully taken the blame for the sport's latest lapse of equity, I'm not going to focus on what the provision was lacking, or how the conference will (almost certainly) amend it in the wake of the latest transgression.  That issue, I think, is well covered by the SEC who had the foresight to see the potential problem, and passed this forward-looking model that, for all intents and purposes ends the debate.  The Big 12 will climb on board with a similar provision this offseason and we'll never have to watch this kind of political theater again. 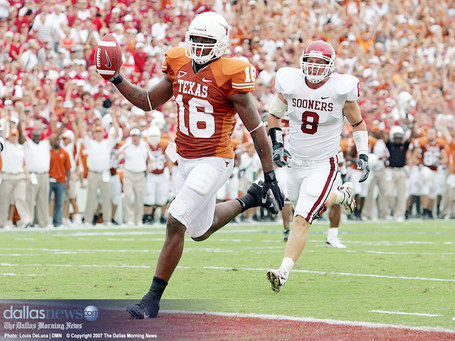 I guess it was a shootout after all.  It's just, Texas was playing with a toy gun...

See, it's strange, but what troubles me the most about this disaster is the fact that the humans -- you know, those irrational, amorphous beings -- were effectively outbid by a machine.

Sure, the Coaches Poll put Bob Stoops' squad ahead by a single point -- but the AP sided with Texas, to an 8 point tune.  (The AP, of course, has no bearing in the 3-part BCS calculus, so it shouldn't be much of a surprise that Boomer messed with Texas in the only measure that matters).  Once the silicon circuits got their hot chips on the data, they crunched, chewed, and spit out an "objective' magnification of the Sooner's triumph.

And the truth is, I'm okay with that.  Coaches and fans are inherently influenced by subjective bias.  The computers are the perfect detachment.

It's just sometimes the computers don't appear to practice what they preach.  If every game is supposed to count equally, why install a compounding equation that has -- as an inevitable consequence -- the potential to favor late-season achievements over early-season conquests?  Maybe it's because momentum does matter.  Both on the field, and in the process of bowl selection -- where committees must capitalize on the short attention spans of the viewers they depend on.

Don't think it matters?  Tell me which of the following teams you think is better...

Although each set of teams has the same record, I'm willing to bet your mind naturally gravitated to the squads that are playing best at present: Oregon, Georgia Tech, and Cincinnati.

I don't think there's anything wrong with that, to a certain point.  Our sport fields some 120 participants who compete in 11 conferences across a 7,000 mile geographical range.  There's no way everyone can play, or come even close to playing everyone else.  Which means we're forced to rely on those darn truth functional conditionals to make assumptions about similar, but unrelated items.

It's only when the algorithms defy the simple virtue of an on the field outcome with a direct lifeline to the national championship game that I get a little skiddish.

It's no big deal, I guess.  Just another something a playoff would solve.  Put it on the tab...