Your Chance to Blog Live From a Warm Weather Location...

Share All sharing options for: Your Chance to Blog Live From a Warm Weather Location...

If you, or a friend, or a family member, or someone you vaguely know, is taking a trip to one of the seven Big 10 bowl locations this year, we at The Rivalry, Esq cordially invite you, or them, to share that bowl experience with our readers.

As part of our attempt to saturate you with as much Big 10 Bowl information as possible, check out the other Bowl links and competitions:

A Fake BCS Playoff, created by Jon, with live voting.

A chance to be The Rivalry's Bowl Competition champion and walk away with a trophy (just download the bracket, fill it out, and send it to grahamfiller10@gmail.com).

In our continuing attempt to capture the culture of college football, we are looking for you the fan to paint a picture of the estuary that is the bowl game. The casual TV watcher might know know that Wisconsin's run game was solid against Florida State, but they don't know what it was like when the uber-attractive FSU females met the hard drinking Wisconsin fans on International Drive in Orlando. That's where you come in with running commentary of the entire bowl experience, from the dining hotspots to the stadium tailgate.

Simply email your name and what bowl you will be attending to grahamfiller10@gmail.com, then let me know when I can expect your entries on the blog. Feel free to email the entries to me or post them on the site via FanPost. If you're not attending a bowl game, tell a friend who is attending that he can get his name on The Rivalry.  Let the bowling begin! 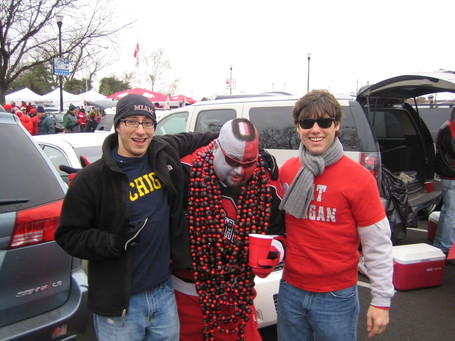 By putting your running commentary on The Rivalry, you can be a superfan like Captain Buckeye here.