Share All sharing options for: "Nameless" Lions Stun No. 1 Sooners

There might not have been any names on their jerseys, but you can bet Oklahoma quarterback Sam Bradford knows every member of No. 8 Penn State's defense by heart.

The lone lions, as the disambiguation suggests, were heavy underdogs when they entered Dolphin Stadium to face top-seeded Oklahoma in the first round of the 2008 FBS Fantasy Playoff, but they quickly showed their might; dominating almost every aspect of the fair-weather showdown. 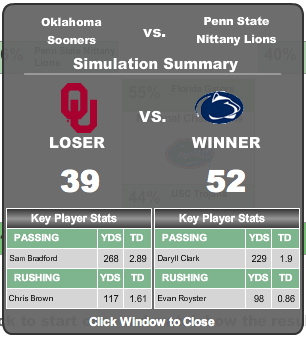 More physical than finessed, more brutish than beautiful, the Nittany Lions overcame an early 7-0 deficit -- blocking a botched Oklahoma field goal and running it back to tie the game early in the Second Quarter.

On the next Sooner series, Penn State smashed the OU offensive line, and sent star quarterback Sam Bradford to the turf -- aggravating a recently-mended thumb injury that ultimately would force him to the sidelines.

Paterno's men capitalized -- tightening control of the clock and garnering a 10-point lead at halftime. The Big 10 representatives never looked back.

"We were surprised," Oklahoma Coach Bob Stoops lamented in a post-game press conference. "No one knew what it was," he quipped, referring to the Nittany Lion's defense. "Where we come from you just don't play like that -- It's almost unsportsmanlike."

Penn State (12-1) advances to face the winner of No. 4 Alabama v. No. 5 USC in the East Divisional Final on January 1st.