In a storied and venerable epic, No. 4 Alabama struck gold against No. 5 Southern California in Round 1, Game 2 of the 2008 FBS Fantasy Playoff.

It was a matchup of legendary programs in New Orleans, akin to the 1977 series when the eighth-ranked Crimson Tide went west and upset the top-ranked Trojans. Despite enjoying a higher-seeding, Nick Saban's Tide had something to prove: the last time they entered the Superdome, 16 years ago, they walked out national champions. 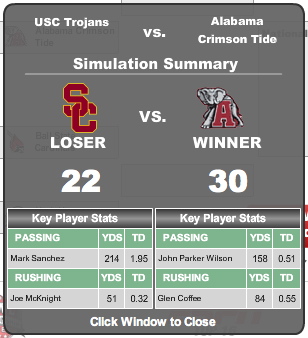 It was an even-keeled back and forth, with USC moving the ball 84 yards on an opening drive to take a 7-0 lead. Alabama responded with a 74 yard march of its own, complimenting and contrasting the Trojan's wideout play with a punishing ground Gimlet. The Trojan defense, the top in the nation heading into the contest, remained relentless for the next two quarters, forcing the Tide to punt on four consecutive series, and neutralizing the aerial acrobatics of star freshman Julio Jones.

"It turns out, we know how to play a little of that, too," Coach Saban said of his defensive unit -- the third best in the country.

USC took a ten-point lead and the ball into the third quarter, but quarterback Mark Sanchez had a tipped ball intercepted and run back, bringing the Tide within three.

"After we couldn't finish last time (in the SEC Championship), Coach Saban told us you got to play four full (quarters)," said running back Glen Coffee. "Actually, he said if we didn't, he'd make us spend the summer working on his family peanut farm. No way I'm doin' that."

Saban refused to comment about his alleged peanut holdings, or labor law violations. An inquiry to the United States Patent & Trademark Office revealed an application had recently been filed for the tag: "Nick's Big Nuts."

The Tide scored 11 unanswered points in the fourth-quarter.

Alabama advances to face No. 8 Penn State in the East Divisional Final on January 1st.