The stars at night were big and bright when Mack Brown's Texas Longhorns took to Tempe, and came out guns blazing against the undefeated Utes. Heisman runner-up Colt McCoy shot-em-up, with 266 yards in the air, and an additional 66 yards on the ground. Brian Johnson's offense struggled to make a first down the entire first quarter, falling into a 14 point hole, before finally sustaining an 8 play, 79 yard drive, earmarked by a 47 yard pass to Freddie Brown. Utah wouldn't find the endzone again until the 6:42 minute mark in the fourth quarter. 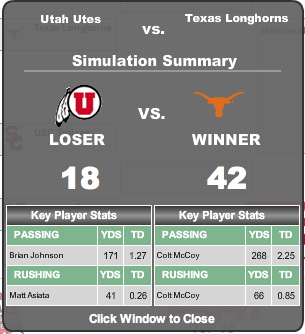 The second and third quarters went off without a hitch for the Longhorns, who stormed off consecutive touchdown drives, each finished by the veteran McCoy. The only adversity of the evening came when ABC/ESPN commentators Kirk Herbstreit and Brent Musburger hosted an on air teleconference with Oklahoma's Bob Stoops during the waning minutes of the third quarter.

"That should have been us," said Stoops, referring to a Texas touchdown. "It's just going to be hard to explain to my guys how we beat (Texas), and yet didn't get to play a (expletive) cream puff like Utah in the first round. What's the point of seeding?"

(Stoop's Sooners were handedly defeated by No. 8 Penn State in their first-round matchup.)

"It felt good," said McCoy, who recently returned from his Heisman formalities in New York City. "I didn't miss a beat."

Texas advances to face the winner of Florida/Texas Tech in the West Divisional Final on January 1st.