All I Want For Christmas...

Share All sharing options for: All I Want For Christmas...

You might have noticed production on the site has looked a little like an Oldsmobile plant the last few weeks.  As Graham indicated, we've been swimming through the whirlpool that is end-of-semester exams.  I punched my card on my last final Monday, and now, am privileged to enjoy a month away from the strange concrete and marble building at the corner of 11th and High.  A return to this proverbial supper club couldn't be any more in order.

I recently read a fascinating story Michael Weinreb wrote on our conference's struggles titled, The Big Ten Needs a Valiant Bowl Season.  Weinreb compares the league with the American automobile industry, a fortress "teetering on the verge of extinction."  He has a particular affinity for the first car he ever rode in: the Plymouth Valiant.  As he describes:

...a hideous-looking automobile, roughly the color of a pumpernickel bagel, with an AM-only radio and bench seats that could have accommodated the population of several Caribbean islands. I was a small child, and this car possessed an oafish charm. It was plodding but effective.

Sound like any major conference you know?  I can imagine Detroit, an entire city staring out the windows of the Renaissance Center at the frozen eddys and cisterns on the big river; the casino lights of Windsor glowing in the heavy, steel distant sky. 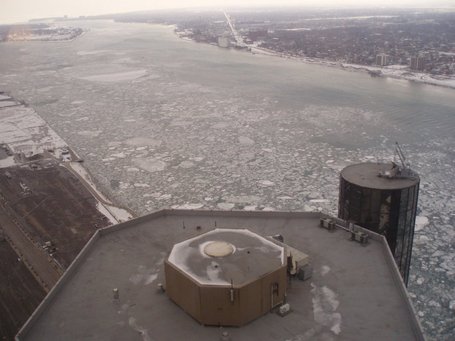 All of the Big Ten is waiting also.  Waiting for the next chapter.  For a mismatched bowl season certain to be chalk full of disappointment, embarrassment, and regret.

I'm reminded of the following passage I wrote in late-May:

Graham has rebuked me more than once for my seemingly limitless confidence in his Wolverines as reflected through past season predictions. I think I might have been the only person in the world to pick the maize and blue over then defending national champion Florida in last season's Capital One Bowl.

And yes, seated at a local pizza joint in Cambridge, MA, I even went so far as to cheer on Lloyd and the gang over a slice of pepperoni and a Sam Adams. (The Harvard kids had no idea what the hell was going on). When it was over, the man made the quiet walk from the locker room to the team bus without a necktie, his suit jacket unbuttoned, a cigar in one hand and a bottled water in the other. I'll always remember you that way Lloyd -- a classy kind of stubborn.

And so, like war lapping up against the shorelines where Princeton played (anyone who caught that Fitzgerald reference wins a sweater vest), a new era dawned in Ann Arbor. Savior or sinner, Rodriguez's mission to salvage UM (and make "Michigan Man" less of a euphemism for slow, fat, and cocky) has inspired spectators and pundits alike to weigh in. Will the great typhoon spread survive the northern winter? Will the Michigan of the past glitter with pace, prominence, and purpose?

It seems only natural to draw a parallel between an underdog's triumph, and the not-so distant future of a proud brass league, dusty with decline.

I'll tell you what I want this Christmas: I want the league as a whole to stand up on the national stage and fight.  Not necessarily to win (they won't, at least not across the board); but to put up a hell of an effort -- punctuated by toughness and competitiveness from top to bottom.

I want to see Minnesota play like they did in October, you know, when they stormed the gut of the season like a rafter on the Gulley hits the surge, going 3-0 on the shoulders of Willie VanDeSteeg, and ambushing quarterbacks like Juice Williams at the rate of five sacks a game.  I want to see Big Willie get just one first quarter lick on Todd Reesing; the kind of hit that's so hard it sounds hollow.  But that's not all...

I want to see Wisconsin play like the Top 10 team everyone in the country thought they were.  That means roto-tillin' on the Florida State defensive tackles.  I won't be satisfied unless those boys are panting on the sidelines, their knuckles raw and red from hard sets.  I want to see Bret Bielema coach four whole quarters of football.  None of this "We played pretty good until Tennessee kicked our ass at the last second crap."  But that's not all...

I want to see Northwestern's Corey Wootton blaze through Missouri's offensive line.  I want to see Chase Daniel go Napoleonic on the sidelines because he got a hand in his face and grass on his helmet.  I want to see Pat coach like Mike Gundy, balls to the wall, playing to win from the first series.  I want to see Tyrell Sutton punish a cubby Tiger defense that coudn't out hit the Pink Ladies in a pillow fight.  But that's not all... 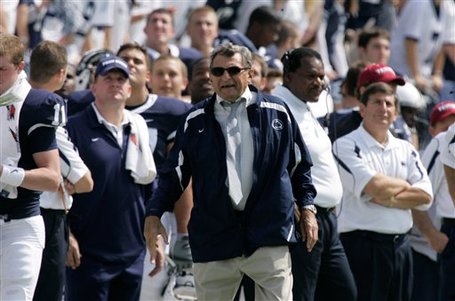 I want to see Joe Pa back on the sidelines.

I want to see Iowa play like they did in the 2005 Capital One Bowl against LSU (Watch the :45 second mark.)  I want them to show why they're the lone conference favorites.  I want to see Steve Spurrier jawing with the officials.  I want him to think about retiring after this game.  But that's not all...

I want to see Michigan State finish what they started in Strawberry Canyon.  I want to see Knowshon Moreno get shut down by the big white Spartan defensive ends.  I want Mark Richt to show he really can't coach, and Mark Dantonio to show he can.  I want to see the seventh worst rushing defense in the SEC get bifurcated Yellow Jacket style by Javon Ringer, and when Ringer gets stuffed, I want Hoyer to pick up where he left off.  But that's not all...

I want Jim Tressel to lead his Buckeyes.  I want him to get mad, eyes dialated like a recovering alcoholic on the sidelines; wild with repression.  I want him to jump off the ground -- like he did last year -- when his unit gets a crucial third-down stop and to head butt players when they sub out.  I want Texas to see a real defense.  I want Jordan Shipley to fear the post.  I want to play man-to-man.  But that's not all...

I want to see Joe Paterno walk on the sidelines.  I want Daryl Clark to get it up.  I want to see the Nittany Lions put up more than thirty points on an NFL defense.  I want the Trojans to be distracted.

I want to be drunk with laughter.

Because even if every one of those games ends with a loss for the good guys, I'll know we've still got it.  Call it a triumph of the will.  A tonic for the off season.