One of the most anticipated first round editions of the 2008 FBS Fantasy Playoff proved to be a smoking gun as Pasadena lit up on the arm of silver slug Graham Harrell and buck shot Tim Tebow. It was a pistol duel early on, as the Red Raider guards picked up Florida's pass-rush and allowed Harrell and star wideout Michael Crabtree to point and shoot. The result: a 84 yard, eleven play drive, punctuated by a brilliant grab and lay-out by Crabtree, who averaged 6 yards after the catch. 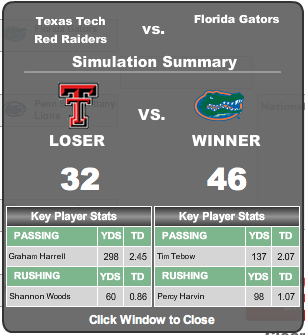 Still, the Gators had more bite. Tebow nursed an offense, reenergized by the return of Percy Harvin, toying with a recognizably softer Tech defense by alternating option, and play-action looks. The Gators matched the Red Raider's opening series, then one-uped the hot hands, with three consecutive scoring drives; touchdowns from 17, 14, and 2 yards out. Texas Tech pulled the game within 7 with 9:00 minutes remaining in the final quarter, but the Gators answered with a 92 yard kick return -- executed by a brilliant special teams unit.

"I still can't believe they went with Chizik," Raiders Coach Mike Leach mulled afterwards (referring to Auburn's controversial hire). "What was the question?"

Florida advances to face the Texas in the West Divisional Final on January 1st.