It was another definitive success and slight to the critics when Joe Paterno and his monolith of a Penn State team hardnosed another national powerhouse, grabbing the East Division Final and advancing to compete for their first national championship since 1986. The team holding the last seed at the beginning of the FBS Fanasy Playoff is suddenly positioned to be the last one standing after dusting off No. 1 Oklahoma, and now, the No. 4 Crimson Tide. 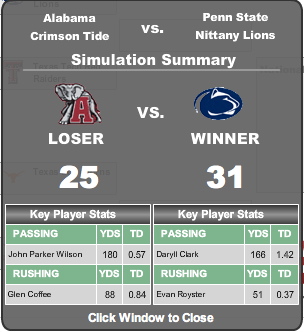 Strangely, the battle of defensive brawn started out as an offensive showcase as Daryll Clark led the Lions 68 yards for an opening touchdown, and Alabama's Glen Coffee responded with a 54 yard breakout run. Only then did the defenses put a lid on things: forcing a full quarter of stalled drives and position play.

The Nittany Lions trailed by 10 points heading into the fourth quarter. Clark moved in for the comeback with an 8 yard slant pass for a touchdown, but the resulting PAT was blocked. With 2:14 remaining Penn State recovered an onside kick; and completed three consecutive out routes to put themselves in striking distance. It took three attempts before Clark threw long on third and twenty one and found Deon Butler in the endzone.

Penn State advances to play the winner of Flordia/Texas for the first-ever 2008 FBS Fantasy National Championship.