Share All sharing options for: The Obligatory Predictions Competition - Week 15

This marks the final installment of the Obligatory Predictions Competition for the regular season.  Early next week, we'll debut our highly-guarded Bowl Edition format.  While we're not ready to tell you exactly how the dance will play out, know that: 1. The contest will be comprehensive (you'll pick all 34 bowls at once, and your score will accumulate through the BCS National Championship Game), 2. The overall winner will receive an official piece of custom hardware, a feature on The Rivalry, Esq., and a year's worth of bragging rights.

Experts of the official rules you all are, I know you're wondering what the heck we do when things come up dead even.  We had this happen a few times last year, and the remedy is simple: the point carries over into the next week's play.  That means with the scoreboard frozen at its Week 13 mark (Filler 8, Franz 5) we're in the double bonus.  Winner take all.

As if that's not enough incentive to kick ass this week, Franz is in a sudden death situation for the season.  if he wins Week 15, he'll enter the bowls down by just one point -- 8 to 7.  But, if he loses, he'll face an insurmountable 5 point deficit. 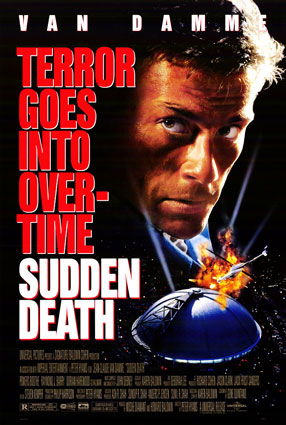 Filler thinks he can polish things off.  He's not counting on the Muscles from Brussels, who took the red eye into Columbus last night to serve as Franz's strategic advisor and stunt coordinator.

Crystal Ball Call (pick of the week): OKLAHOMA by 21 (Franz).  What makes this one so good is that with :26 seconds left in the game and the Sooners with the ball and up by 13, Franz was set to lose the spread to Filler, who picked Big Game Bob by 14.  Those two points would have cost him the week (and, almost certainly, the season).

Backup running back Chris Brown broke out a 28 yard scamper up the middle for the improbable late TD, and Franz received nothing short of a miracle lifeline.  OU 61, OSU 41.

*Note: To accommodate the abridged championship schedule, picks must be submitted no later than 7:00 p.m. EST on Friday, December 5th.

I have not been that impressed with the huge numbers of Cardinal RB MiQuale Lewis. He doesn’t run people over, he doesn’t break tackles that often, he simply runs behind his All-MAC blockers and finishes runs by falling forward. But the draws and off tackle rushes by Lewis have forced defenses to respect the run, making QB Nate Davis more effective. Davis will go to the NFL and follow in the footsteps of my boy Ben Roethlisberger, Byron Leftwich, and Chad Pennington. Why do MAC quarterbacks show quick success in the pro’s? My philosophy: They get 3-4 years to train in pro style offenses and to smooth out whatever mechanical problems hamper their raw talent. When they get in the pro’s, not only are these MAC QB’s physically ready, they have confidence from years of experience.

Buffalo, whose intemperate season will earn the school its first bowl appearance since stepping up to the FBS in 1999, is coming off a streak-snapping loss to Kent State.  Everyone talks about the Cardinal's MiQuale Lewis and his fourth-in-the-nation-best 130.8 rushing yards a game.  What about Buffalo's James Starks, who rates 6th in the nation?  It's clear that this one will be physical, but let's face it: the MAC West is far stronger than the Big 10 its eastern divisional counterpart.

I don’t care if you don’t care about the ACC, the BCS does. And they pay the bills. This Eagle defense is flush with All-ACC defenders who must be ready for VT’s run first, pass second QB Tyrod Taylor. An unbelievable statistic here: Virginia Tech has scored more than 30 points ONCE all year. Boston College has scored more than 30 points THREE times all year. Not only will this game be low scoring and close, it will be ugly.

Boston College beat Virginia Tech 28-23 at home on October 18, despite turning the ball over five times -- two of which were returned for Hokie touchdowns.  Down the stretch Virginia Tech needed Miami and Georgia Tech to lose to get back to Tampa.  It'll only take 'em one loss to get to a lower-tier bowl where they belong.

Due to a lingering Gator man crush I had since I saw Danny Weurffel shred FSU in 1996, I would love to see the Fighting Urban’s chomp through Alabama’s title hopes. Florida’s spread has worked like a charm this year. Effective running from Demps, Harvin and Tebow have allowed Florida to run inside and outside seamlessly. Plus that Gator defense has tackled effectively and showed maturity and intensity – both lacking from last years defensive effort. Read what I wrote in my SEC preview about FL:

Bloggers and experts alike (ha) seem to believe the defense’s experience should be a major factor in returning the Gators to their 2006 championship form (anyone remember Jarvis Moss and the Gators hammering Troy Smith play after play in the 2006 BCS title game? I certainly do).  Predicted Finish: 11-1 (7-1 conference)

Key to the game: How will Florida react when the talented Alabama defense stops them early?

They may not be the top two teams in the country, but one of them almost certainly is.  Presenting -- for your out of conference edification -- another grand lux epic matchup of power versus speed.  Look no further than the 2006 National Championship to see how this one turns out.  Nick Saban has the restoration of the historic Crimson Tide years ahead of schedule, but his present squad is simply not championship pedigree.  They lack veteren leadership and haven't faced adversity.  Although they've roared into the national consciousness, all they've really showed us is the ability to sink middle of the road competiton (UGA, Clemson).  The Gators are premier cru.

The “Magic Jersey” Game. USC will wear red jerseys to signify the blood that embattled quarterback Kevin Craft will shed in this game. The talent levels here are disproportionate; lets hope for a mercy killing.

For the sake of my Buckeyes and their BCS ambitions, let's just hope what happens in Pasadena stays in Pasadena.

Playstation has not nothing on Sam Bradford's numbers. Even though Texas beat them in the Red River Shootout, no team has effectively stopped the slashing pass patterns and powerful runs of Oklahoma. I am so glad that the MSM has focused on the Oklahoma offensive line, because that is where the success of this Oklahoma team lies. Loadholt, Robinson...These monsters of the middle have given Bradford time to deliver the ball to his athletes. On the Mizzou side of the fence, Jon’s girlfriend will be rooting wildly for a BCS altering upset, being a proud Columbia alum. She better hope Chase Daniel stops his nasty habit of throwing interceptions in big games (6 picks in the Tigers 3 losses).

Mizzou has no defense, they can't tackle in space, and Chase Daniel is afraid of Oklahoma.  The only thing that will save the Tigers here is an out of body effort coupled with a Sooner slump.  I'm rooting for Pinkle and the Zou to bow out gracefully, but something tells me I'm headed to bed early.