Share All sharing options for: The Worst 5-0 Team in College Football History?

I should start by giving credit where credit is due.  I owe my admitted title skepticism to Oops Pow Surprise over at Black Heart Gold Pants, who coined the worst of the undefeated slant in the wake of Iowa's 22-17 defeat last week at the hands of Northwestern who advances to 5-0 on the season. 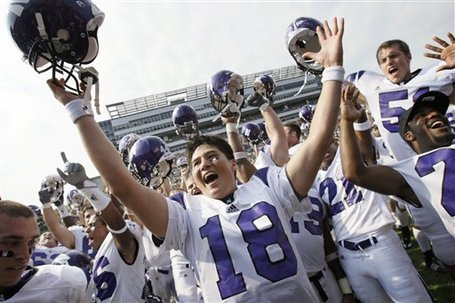 Last week's come from behind victory over Iowa was particularly impressive considering the Wildcats didn't overcome just a 14 point deficit -- they also waded through 70 yards of penalties.

Yes, Northwestern is undefeted, and no, we shouldn't be surprised.  When I wrote my Big 10 Conference Preview back in June I noted:

"Northwestern finished 32nd in the country in total offense [in 2007] (2nd in the Big Ten) -- clawing out an impressive 427 average yards a game. That offense returns largely intact, with quarterback C.J. Bacher, and wide receiver duo Eric Peterman and Ross Lane. But, the Wildcats finished 10th in the conference in scoring -- something of a disparity. To finish what they start, incoming offensive coordinator Mick McCall spent the spring installing a no-huddle offense

Increased pace and purpose could put the Wildcats in position to make a bowl run."

I also noted the Wildcats had a "chance...to open the season 4-0."  I guess I was being modest.

Redzone success: it's what the purple and white are doing right.

Five games into 2008 Nortwestern is 20 out of 22 in attempts that led to points in the red zone: giving them a 90.91% scoring efficacy rating.  Fifty-four percent of those scores were touchdowns.  The Wildcats are third in the Big 10 in the red, despite the fact that they rank a modest eighth in conference in total offense.

That's a significant improvement over last year's tenth place mark, something that's owed to the speed of the no-huddle attack and the smarts of the decision makers.

So is the celebration justified?  Absolutely.  Northwestern hasn't come out of the gate 5-0 since 1962 -- a campaign that promptly unraveled down the stretch with two losses in their final four games.  Of the previous three other times in history they made it to the sequential cinco undefeated, they won the Big 10 twice.  If you're an Evanston M.B.A., you like those odds.

Still, times have changed a bit since the Cuban Missile Crisis.  For one, we play a few more games.

To become bowl eligible Northwestern will have to handle another one of its Big 10 brethren, with its best chance an away visit to Minnesota on November 1st.

Still, it's one game at a time and for now the royal rascals can revel at the view from the top of the Big 10 standings.

Just don't expect them to stay there.