Big 10 Football Coaches Weigh in on the 2008 Season

Share All sharing options for: Big 10 Football Coaches Weigh in on the 2008 Season

At the beginning of the season, we posed some questions that Big 10 coaches should have been asked at Media Day. So I figured we would allow these esteemed leaders to give some postseason answers.

The Rivalry's Preseason Question for Joe Paterno: What are you planning to do after you retire this ye -- Holy sh*t, how did you get a concealed-carry permit?

Paterno:  Not only am I alive, albeit hobbled, but there is a large chance my team kicked your teams a** this year. And thanks to Viagra, my longevity no longer has to do anything with coaching tenure...HooAhh

The Rivalry's Preseason Question for Bret Bielema: Will this be the first time since 1981 you defeat both UM and OSU? Strike that question, let me ask something realistic.

Bielema: F*** you kid. You don't know what its like to not be able to call my own plays while Barry orders sweep after sweep through helmet microphone to the quarterback. I'm heading to the Dry Bean to find some undergrads going to recruit faster players.

The Rivalry's Preseason Question for Rich Rodriguez:You're looking awfully big this year. Is it because (strength coach) Barwis is bulking you up or is it from having to pick up that huge wad of money and hand it back to West Virginia? Oh and how long did it take you to convince your wife that a year unlimited Mystic Tan package was just as good as a trip to Cabo?

Rodriguez: Mystic Tan package: $2,200. West Virginia escape: $4,000,000.00. Hanging with Barwis in a town devoid of "Deliverance"-esque hicks who wanted to summarily execute my relatives when I left: Priceless.

The Rivalry's Preseason Question for Tim Brewster: Is it true you looked into the NCAA rules to see if you could "pull the goalie" by not fielding any players on defense, thus allowing you to play a few extras on offense?

Brewster: For the record, my offense busted heads for about 8 games before we had to play real competition. But yes, I did check the rule. Now I have to go find coaches, because all mine are gone.

The Rivalry's Preseason Question for Ron Zook: How do you recruit so well everywhere you go -- Oh my -- Aren't you a handsome one, with that consummate politician's haircut and square jaw...And yes, I would like to invest in some Florida swampland.

Zook: Thank you. I got a question for you: Why would anyone rather coach at Illinois than Florida? Because you don't get fired after a horrible season when all your coaching moves fail! Brilliant!

The Rivalry's Preseason Question for Pat Fitzgerald: Does it bother you when JoePa calls you "Son"?

Fitzgerald: I'm sorry, your question is being drowned out by the constant praise from the press because of my youthful exuberance and my ability to inspire a Northwestern team to a winning season.

Tiller: Phew, thank God someone is finally asking me questions not regarding the disastorous 2008 campaign. 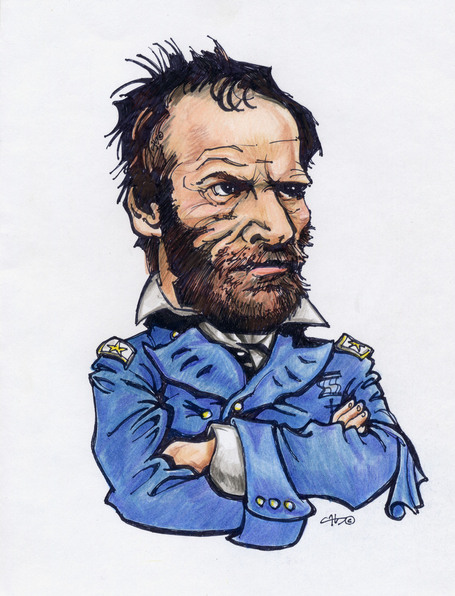 TiskTisk Georgia..Didn't I teach you what happens when you wear the wrong colors?

The Rivalry's Preseason Question for Jim Tressel: If you end up having to play Rebel Georgia for a National Championship, would you consider dressing your players up like (native Ohioian) General Sherman as a polite reminder of what happens when the South gets a little too big for its own britches?

Tressel: I think the Bulldogs taught us enough about what the effectiveness of wardrobe changes, so no.