Share All sharing options for: Pre-Draft Analysis: Interview with Mocking the Draft

With the Senior Bowl and Shrine Game wrapping up and the NFL Combine quickly approaching, I thought an interview with SBN's resident NFL Draft expert, Mocking the Draft, would be a perfect way to continue our extensive coverage of everything Draft related.

MD, thank you for coming onto The Rivalry, Esq. Rumor goes that you are an Ohioan - Are you blanketed with some combination of snow/slush/mud?
It's a weird hybrid of snow, topped by ice, topped by more snow. It's just awful out here right now. It does, however, make me want to play backyard football.
The hype for the draft prospects is so high, while at the same time, the bust potential is always there. Is the fear/excitement about the unknown the reason for the popularity of the NFL Draft?
Yeah, probably. The draft has really become a big business of its own, with ESPN's coverage, all the Web sites and mainstream media coverage. It's crazy, really. The popularity, to me, stems from following a lot of these players throughout college. You get some kind of connection with the players so it's fun to watch them reach the highest level. It also helps that the draft is a few months after the last game is played. Unlike the baseball draft, which has no buildup, the anticipation of the draft just builds the excitement which leads to fear, especially for those teams who stink every year.
We're pretty familiar with the top Big 10 players who will be drafted in Rounds 1 and 2: Jenkins, Wells, Davis, Laurinaitis, Greene, Williams. Do you have any predictions or observations regarding these top talents?
I love Malcolm Jenkins. Right now, I have him as my top player in the draft, even though he probably won't go in the first five picks. He's just super talented and can do everything you'd want from a cornerback. Wells is a guy who I started 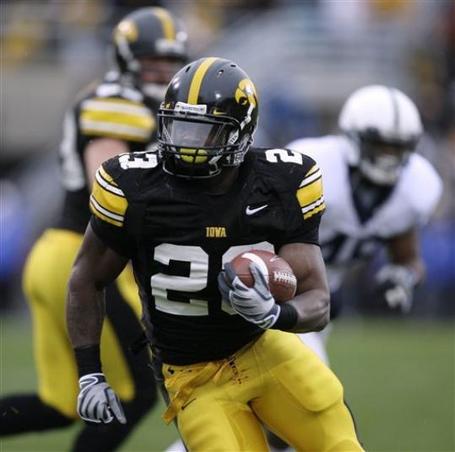 following in high school at Garfield in Akron. He's always been what he is now -- a strong guy  light on his feet. Unfortunately for him, he's just been injured a lot. He's not getting a lot of attention right now, but if he's 100 percent healthy and runs a good time at the Combine, watch out. (ed note: Click on the following link, its an amazing look at James Laurinitis - very critical and straightford) Laurinaitis, unbeknownst to a lot of people, was a little banged up his senior season. After his junior year, the buzz was really high on him. Now, that's kind of tempered a little, and I'm not sure that's wise. He's a good all-around linebacker. Vontae Davis is a hard guy to predict. Perhaps it's the attitude of his brother Vernon Davis of the 49ers rubbing off on him, but you wonder about Vontae Davis' dedication. He was benched during his junior year because Ron Zook wasn't happy with his attitude. He sure is a heck of an athlete, though. If he can keep his head straight, he could be special. Shonn Greene, to me, is a good rotational back. I don't think he could be relied as a No. 1 guy, only because he doesn't have great speed. It will interesting to see how he's utilized in the NFL. Same with Derrick Williams, a speed guy who didn't have the best college career. But you just get the feeling with Williams that he's going to be a better pro, so long as he's with coaches that can exploit his assets correctly. He reminds me a good bit of DeSean Jackson of Cal.
Of all the possible Big 10 players projected to be selected in the late round, do you see any prospects who will be taken early or later than predicted?
I don't know if you'd necessarily consider this later than predicted, but Michigan State's Javon Ringer will make some team pretty happy in what will probably be the latter part of the third round. So many juniors came out, who will likely go ahead of him, that he'll be a good find.

You might remember the University of Michigan's tremendous run of starting QB's who made the NFL, starting with Grbac in the early 90's and running up to Chad Henne last year. Do you see any other Big 10 school starting that kind of one-position success lately?
You would hope it would be Penn State's linebackers. Paul Posluszny and Dan Connor could possibly get better. Then people sometimes forget about Sean Lee. Then after him, Navarro Bowman is going to be real good at the next level. They've got a couple other young linebackers who should be pretty good as well.

The NFL (just like any other sport) is an evolving league, always changing the kinds of players that are in demand. Do you see a trend evolving this year in what NFL teams want - and will this trend affect any Big 10 prospects?
It seems like the only trend is finding guys on offense who can do multiple things like play quarterback, running back and receiver. The only guy I can see from the Big 10 do that this year is Williams. I don't think this trend will have much of an affect on the Big 10, which is traditionally a little behind of curve in play evolution.
The NFL Combine is the 800 lb gorilla in the room, sometimes obscuring the reason and logic of scouts. What's your theory of how much importance should be placed on Combine performance? Do you have a favorite story coming from the Combine?
I don't put a ton of importance on the Combine, or even the Senior Bowl for that matter. A few dozen games is more important in my evaluation of a player than a few weeks worth of practice in opportune weather conditions. Sure, you can adjust your rankings some based on what a guy does, but I don't jump a guy a ton based on what they do at the Combine. I think my favorite Combine story will actually happen next year with Taylor Mays of Southern California. He's going to blow people away.
What is your favorite storyline of this year's draft?
I'm really interested in seeing how the offensive tackles fall. Some people love Andre Smith of Alabama. Some love Eugene Monroe of Virginia. Others, me included, really like Michael Oher. Then you've got Phil Loadholt of Oklahoma and Jason Smith of Baylor who are both probable rookie starters and Eben Britton of Arizona, who could do well.