Michigan State's In-State Recruiting Domination: What It Means For The Big 10

Share All sharing options for: Michigan State's In-State Recruiting Domination: What It Means For The Big 10

Maybe you didn't pay attention to the huge number of top Michigan recruits that migrated from all over the state to play for Coach Mark Dantonio. The moral, physical, spiritual, emotional, hell, every possible kind of victory that Dantonio scored by grabbing 7 out of the top 10 Michigan recruits (see below for location) cannot be measured. So let's blow this whole thing out of proportion for a moment and then bring it back to reality. First, the hype... 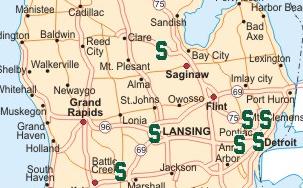 Andrew Maxwell, the appropriately named 4 Star Midland quarterback, had a monster senior season and looks ready to compete for the Spartan starting spot. Coming from the football poor Bay City/Saginaw/Midland/Flint area, Maxwell committed early to Dantonio's program and became a sign of improvement. It was a great story - "State's top QB barely glances at the traditional power, stoically marches to Lansing to build program." The latest "big recruiting coup" story is that Orchard Lake's two sport star Dion Sims is going to MSU, on the premise that he wants to play for Izzo and catch a couple balls at tight end. His verbal commit has only strengthened the nation's fifteenth ranked recruiting class of 2009.

But one year of in-state domination and rebuilding in Ann Arbor can't reverse years and years of Wolverine rule, can it? Let me focus on a couple of points to put this Spartan Recruiting Hysteria Greatest Year Ever in perspective...

Let's give Dantonio some credit here. He has brought something which no Michigan State coach has brought in the last 10 years: Perceived stability. I call it the "Phil Jackson Effect." People just believe that Phil knows what he's doing. He benches a superstar, people say "Oh that Phil Jackson, making smart moves." He gets outcoached by an inferior coach with an inferior team in the NBA Finals - very little was made of it. The Zen Master is practically coated with teflon...Compare that to Dantonio. When he walks around with a scowl, people say "That guy, he's always under control, not an idiot like John. L Smith." So what if the 2008 Spartans showed very little offensive imagination? That's just Smith breaking in a system that will flourish in the future under his steady hand.

Michigan's downturn couldn't have come at a better time. Maybe it's only short term and the Wolverine's will be Top 10 in no time. Doesn't matter. If Coach D can straddle the top tier of the Big 10 for a couple of years, he could mayyyyyybe even bring MSU onto the radar's of big time recruits all over America. Remember in 2003 NCAA Football for Playstation 1, you'd win a couple national titles and your ability to recruit nationally would grow exponentially? Yeah...like that.

Long time coach with alumni support = victories. This equation is supported at USC, Texas, Penn State, Florida State (don't argue with me about FSU, it's still a valid power program even if it isn't the Megatron force it was in the 90's). Dantonio has built strong roots in Michigan and got the support of many high school coaches and alumni. Plus, Chief Scowl has a perfect reputation, which will help him stay in East Lansing and build, build, build.  An Ohio State guy who happens to hate Michigan and makes a push to out recruit RichRod on the home turf? In Spartyland, that makes you more popular than Jennifer Love Hewitt in Can't Hardly Wait.

It's a cold day in hell when the Spartan fans act humble about this recent turn of events. But I want to urge caution here, because teams like Penn State (49-18) and Ohio State (45-7) weren't that impressed with the 2008 edition of MSU's football team...And it's not like Michigan and their Top 10 recruiting class are sitting at home, sucking on their thumbs and crying. So enjoy some Green and White colored optimism while a couple of big dogs inhabit East Lansing and we all wonder whether Dantonio can make 9-4 a yearly occurrence.