Share All sharing options for: The Rivalry Travels: Tostitos Fiesta Bowl (Phoenix, AZ) - Is the Big 12 South Anything Special?

Greetings from the hazy sandstone splendor of JW Marriott's Desert Ridge Resort & Spa in Phoenix, Arizona.  This half of The Rivalry, Esq. has braved multiple connections, NWA snack boxes, and jet lag to reach the Valley of the Sun.  Now, I'm stuck with three days of golf, Mexican food, margaritas, and cigars under the stars.

It's tough to be an underdog. 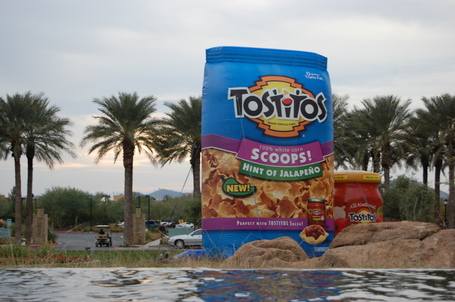 Outside the JW Marriott, Phoenix.

We landed at Sky Harbor last night a little after 9:30 p.m.  I was surprised and slightly encouraged to see a decent number of scarlet and grey clad-faithful at the baggage carosel.  Like the Buckeyes this is my third trip to Phoenix in almost as many years.  In 2005, I watched A.J. Hawk keep it all in the family as Ohio State buried Notre Dame -- celebrating afterwards at Roy's to the chagrin of the entire Irish team who happened to be staying at our hotel.  The next year, I reaped what I had sown, bowing out of the cheap cinder block palace (The University of Phoenix Stadium) that replaced the more authentic Sun Devil stadium in the wake of the shocking collapse of our great dynasty.  Hungry and depressed, we wondered into a T.G.I. Fridays by the airport, drowning our sorrows with cheap corn drafts and $1.50 sliders.

And now, we're back to this cherished, purple postseason home.

I'll do my best over the coming days to keep the curious homestead abreast of the scene leading up to and during the bowl.  I'll also cover the philosophical politics leading up to the game.  For our first entry:

Is the Big 12 South a Great Imposter?

A few days ago on the site, having just witnessed Northwestern's coming within inches of upseting Missouri, I wrote the following:

Is the Big 12 an illusion; a league of miniature, one-dimensional facades more suited for Hollywood backlots than cross-conference challenges?

Since then, No. 13 Oklahoma State got the big stiff by Oregon.  No big deal, right?  After all, the Ducks were playing their best ball of the season coming into the Holiday Bowl.

But then, No. 8 Texas Tech was outed in an equally embarrassing way, this time at the hands of twenty-fifth and defensively-minded Mississippi.

This gets a Buckeye thinking.  Could it be that the league that enjoyed five of the top ten total offenses in the nation only got there because it didn't have a single team that ranked in the top fifty on defense?  Or, is it simply that the no-huddle leads to more plays on the front end, and accordingly, more yards on the back end?

I don't think there's a clear answer.  But one thing that can't be denied is that, at present, the Emperor has no clothes.

Drive North to the small, rural cantina that is Cave Creek to dine at El Encanto, a wonderful rustic watering hole that features authentic Mexican cusine, oversized frozen margaritas, and al fresco, waterside seating on a terra cotta sidewalk that wraps around a man-made duck pond. 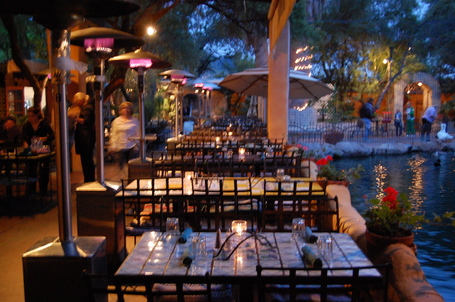 Patio nights at the El Encanto.

We first discovered the Encanto in 2003, and never miss the chance to spend an evening on the patio with cold draft beer and homemade fire-roasted salsa.  The Rivalry, Esq. recommends Camarones de Tequila con Limon: five jumbo shrimp based in fresh garlic, citrus, and Sauza Gold Tequila, simply grilled on a easy bed of corn rice and local vegetables.