For those rare few of you who have NFL Network and were able to catch the Insight Bowl game, you already know that an above average Kansas team dominated a slow Gopher squad that failed to make key defensive adjustments as the game wore on. And I assume that if you're a Minnesota fan, you're pretty unhappy about the four game losing streak that capped this otherwise uplifting Gopher season.

But the magic of college football is that joy and happiness can be found in so many avenues of culture that are attached to the game itself. How many of your friends did you share a drink with during the game? Did an old alum of your school offer you a job interview over brats in the stadium parking lot? As part of The Rivalry's attempt to bring all kinds of Bowl coverage to your e-door, our friend at Golden Gopher Football has been so kind to offer us a write up by a fellow Minnesota fan concerning his Insight Bowl experience.

(Note: Golden Gopher and I had a minor beef surrounding my original Big 10 Quarterback Rankings. I rebutted and life moved on.)

"I have been fortunate enough to attend a few bowl games in recent years.  I drove from Tucson, where I now live, to see the Gophers defeat Oregon in the 2003 Sun Bowl at El Paso.  I made the trip to Nashville to take in a gopher victory over Alabama at the Music City bowl in 2004.  A couple years ago I met my parents in Tempe to watch the Gophers take on Texas Tech in their first visit to the Insight bowl.  Yesterday I returned to Tempe to cheer on my beloved Golden Gophers as they faced the Kansas Jayhawks in another Insight bowl. 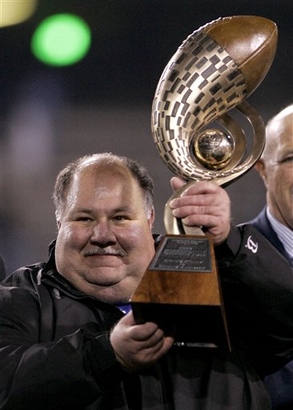 It's always great to see your favorite team in a bowl game.  There's a different kind of energy that surrounds a bowl game.  It feels like everyone is on vacation, and I suppose that's because most of the fans that travel to the game actually are on vacation.  Anyway, everyone likes vacation, and it's always fun to travel to see an away game, especially if it's in beautiful sunny Arizona late in December. Of course, at bowl games there are always a lot of people who go to the game without any allegiance to one team or another.  My friend overheard a "fan" on his phone saying "I'm at a bowl game in Tempe....Oh, it's like Kansas and Missouri or something..."  There are plenty of people who simply enjoy the game for the sake of the game, and I suppose they balance out those of us who bleed our team's colors.

The Kansas fans were great.  They outnumbered the gopher fans at least 2:1, but they were good spirited, courteous, and excited.  I respect the fans of Jayhawk football; they are nothing like those low-down dirty fans of Iowa.  I'm disappointed in my Gophers, but I am happy the Kansas fans got to enjoy a well deserved victory yesterday.  It's a good thing for their program, and I hope they rise to power in the Big 12.

I was a little bit disappointed in the pregame festivities this year.  Prior to going up to Tempe I did some internet research in search of designated tailgating parties or at least some sort of chatter regarding pregame festivities.  The only thing I could find was the party sponsored by the Goal Line Club, an organization to which my parents faithfully belong. This party was off site at a hotel near the stadium, and reservations were required.  I am sure the Goal Line Club threw a great party, as they always do, but it wasn't the scene I was looking for.  I was looking for the lines of cars crowded with college kids holding red plastic cups, stereos blasting, with the occasional outburst of excitement and heated game of bean-bag-toss.  I admit, perhaps I didn't search long or hard enough, but I got to the stadium a few hours before game time, drove a circle around some $20 parking lots, where there was little if any pregame partying, and settled for one of many free parking spots curbside.  I was disappointed that there wasn't a more obvious and organized pregame party or student presence, but I didn't let that get me down.  My buddy and I made the best of it; we had a great time at our own little pregame party.

Last time I went to the Insight bowl there was a great tailgate party with music, food, pretty girls doing face painting, and of course beer.  Lots of beer.  This year no such party could be found.  Maybe it's the economy, maybe there weren't enough tickets sold to justify the expense. Whatever the reason, it's a bummer that there wasn't more of a pregame party.  I would think the organizers of the bowl game (especially a lower tier game like the Insight bowl) would want to get people talking about how great the party was.  If you want people to travel to see the game, or at least attract locals and sell some tickets, you need to get people excited about the festivities.  I wish the Insight bowl would have put together a better pregame party, and advertised to fans where such a party could be found.  I wish more students would travel to the bowl game, and I wish these students would make it known they were there to get crazy and support their team.

My thanks go out to the loyal Gopher fans that made the trip.  They were great (as always).  I had a fantastic time at the Insight bowl this year, despite my disappointment.  I recommend that Gopher football fans make the trip to the bowl games, regardless of how the season finishes up.  After all, fans are what make a fan base, and the party is where you throw it."