Surprisingly, 60% of you picked Michigan to beat Michigan State this week. I figured three factors would push many onto the Spartan bandwagon -

So I wanted to highlight what I see as the most important matchup come Saturday: Michigan's various formations against the effective passing attack of Mark Dantonio's Spartans.

My friend threw out a theory of his the other day and it's worth some discussion. He believes that offenses have the potential to improve more throughout the season, while defenses are more "you get what you see." His theory centers around the fact that offenses revolve around timing routes and precise reads, while defenses are simply athletes reacting as quickly as possible to the opposing squads attack. If the offense is bad early in the season, it can improve as the timing becomes more precise. If the defense is bad, that probably means you don't have the athletes or the training. In his mind, game time and practice repetitions help a quarterback more than, let's say, defensive backs who see the same thing each week.

My friend is a Michigan fan and connected this theory to Saturday's game, pessimistically believing that Michigan is somewhat plateaued on the defensive side of the ball, while the Spartans and young Cousins can only improve.

Obviously broad theories hold little weight, but it's worth discussion.

Really nothing groundbreaking here, except for my exceptionally bad Microsoft Paint work. Cousins (#8) throws effectively from both under center or from the shotgun, but the Spartans throw more from shotgun. The favorite routes are: outs and comebacks to Blair White(#25), sit downs and deep middles to Dell (#2), and crossing routes to Cunnningham (#3) and Keshawn Martin. Cousins, who I named the second best quarterback in the Big Ten, throws a great football but struggles when teams drop linebackers into coverage.

The Spartans are bound to run early to test the shaky Michigan defense, with Caulton Ray, Larry Caper, and Glenn Winston getting the bulk of the carries. During film study this week, the Wolverines will quickly learn these two basic points about the MSU run game:

On the MGo defensive UFR for this week, Brian noted that Michigan ran almost every combination of defense formation possible...3-4, 4-4. 4-3, 3-3-5. Since I don't have the time to draw up each of those, here is what we've learned about the Michigan defense after four weeks of undefeated play.

Michigan has one very good corner, Donovan Warren, and two very bad corners, JT Floyd and Boubacar Cissoko. Cissoko was the guy torched by Jimmy Clausen and Michael Floyd for 540 yards and 12 touchdowns. After getting lit up by Indiana, Booby got benched for Floyd, a hard working but slow freshman. Floyd and Cissoko have been allowing the short 5-8 yard passes all year, which is a bad sign because Michigan State runs these routes extremely well. 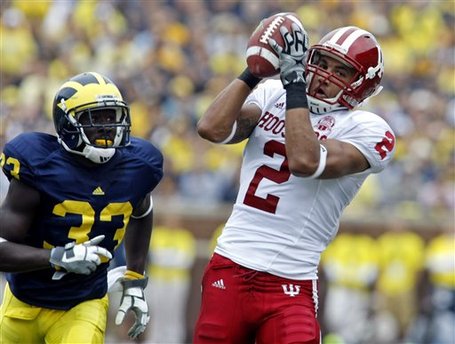 The Wolverine D-Line has steadily improved. Teams absolutely must double team DE Brandon Graham, while DT Mike Martin has been solid since the Notre Dame game.

The LB corps has not shown any chutzpah in slowing opposing offenses. Notre Dame and Indiana put up almost 500 yards each against Michigan as the linebackers took bad tackling angles and got blocked out of plays constantly.

Well, What The Hell Is Going To Happen Saturday?

In a perfect world, Michigan would follow the path shown by the Wisconsin D, who pressed the Spartan receivers and dropped linebackers into a deeper zone coverage. This flustered Cousins early and led to interceptions. The only reason the Badgers were able to do this was because they didn't fear the MSU run game. The linebackers could afford to eyeball the running back and then waltz backwards into the secondary.

On a realistic note, Greg Robinson will probably continue his "bend but don't break" defense (H/T MaizeandBrew) to protect Floyd/Cissy from giving up big plays to Dell, Cunningham, and Martin. Also, if the Wolverine LB's are continuously matched up with with crossing wide receivers, bad things will probably befall Robinson and co.

If the run game and the underneath routes are bottled up, it's going to be a happy day in Ann Arbor. If Cousins gets time to hit White and Dell over and over, the Harrison Roadhouse will be rocking. Either way, it'll be a joy to watch the chess match between an excellent sophomore QB and Greg Robinson.