The word of the day, readers, is "half." Half is the word for two reasons - after this week we are halfway through the season, and, also, the Badgers managed to play only half a decent game against Ohio State. It's hard to believe, but we have been through six games already. The halfway mark in College Football always sneaks up on me. The non-con games that load up the first half are usually against teams that I've either never heard of or heard of but don't care about. Ideally my team knocks off the cupcakes in games that were never in doubt. Then come a few conference games and, before you know it, the back end of the schedule has snuck right on up.

Even when your team goes six and.. er... ahem... five and one, the first half of the schedule always feels unsatisfying because of the dearth of conference action. The second half is always better, though, as teams shake out in the conference standings and bowl bids begin to take shape. And, frankly, after yesterday's loss, the second half can't come soon enough.

I had the (dubious) pleasure of watching this game on Wisconsin soil. I spent my afternoon on the way to my cousin's wedding in a sports bar in Milwaukee. The place was thick with fans in the right type of red shirts enjoying spotted cows and fried things. A good environment, I thought, to watch the Badgers upset the class of the Big 10.

Yeah, that didn't go so well.

To be fair, the Badgers had half of a good game yesterday. I didn't really expect a win - but I thought there was a chance of one if they came into the 'Shoe and played their best game. The Buckeyes are always tough opponents, but when the Badgers roster is largely comprised of, as it is this year, younger players, it requires even more than good play to beat them.

Unfortunately, Bucky only managed stellar play for 30 minutes on Saturday...

Graham offers his own thoughts on the Week 6 action in the conference...

I take a look at Wisconsin's thrilling road win at The Bank in week 5... 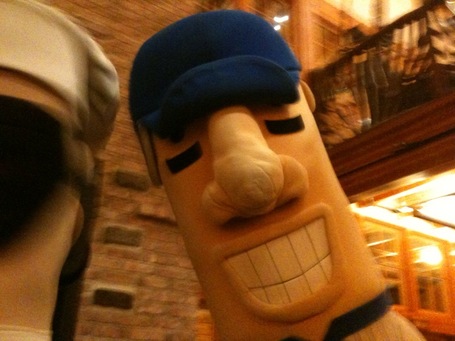 The Milwaukee Brewers Sausages at my cousin's wedding were certainly happier than I was...

Despite one large mistake in the last minute of the first half, Wisconsin played pretty well for the start of this game. The defense came out ready to go, and managed to force 3 and outs or only short gains for the first four Buckeye drives. The offense wasn't nearly as consistent.

Coming into this game, I thought that the Badgers would have to be worried about Terrelle Pryor. Turns out, Pryor wasn't really a factor in this game, throwing for only 85 yards and 1 TD. Rather, the real trouble for the Badgers were the offensive forces of Kurt Coleman, Jermale Hines, and WR / kick returner Ray Small. Er... what? That's right, 21 of the Buckeye's 31 points were scored by players from the defensive or special teams squads. Yikes. So, if the Badgers hadn't managed to shoot themselves in the foot, they would have won this game 13-10.

The biggest of the foot shooters was one Scott Tolzien. Sigh. Tolzien Tolzien Tolzien... I've sung his praises more times than I can recall on this site, but yesterday was just not good. He made two horrid decisions during this game that resulted in 14 points for OSU. On both occasions he attempted to force passes into areas of the field that were completely dominated by red jerseys. He really had no business making throws on both of these plays. At the same time, as frustrated as I am with his poor decision making, it's not entirely his fault. All of the Wisconsin receviers - Isaac Anderson, Nick Toon, David Gilreath, and Garrett Graham - dropped passes that they easily should have caught. Those are the plays that need to get made to beat a good team. If the receivers are dropping easy balls, can you really blame Tolzien for trying to force plays in response?

Gilreath actually had a relatively good game, as he was part of several early end-around plays run by the Wisconsin offense that seemed to catch OSU off guard. John Clay, the ever dependable back, was another bright spot on the offense yesterday. He continued to bulldoze his way through defensive lineman and, while not as dominating as against Minnesota, showed why he is a huge key for Wisconsin this season. The only problem with Clay was one of playcalling. Why did he not make an appearance until the final few minutes of the first quarter? Why did Zach Brown get all of the early carries, even though he couldn't make any headway? Clay is a great offensive weapon for Wisconisn, and he needs to be used early and often. Also, special recognition should go to Culmer St. Jean who (along with the rest of the young Bucky D) continued his stellar play from the last few weeks with a 2nd quarter interception of Pryror that set up Wisconsin's first TD.

About that first TD... Chris Maragos made an amazing leap into the end zone on that play. The leap came on a fake FG try towards the end of the second quarter. The ball was snapped and Maragos took the hand off and ran towards the left side of the end zone. A timely block and an acrobatic leap allowed Maragos to stretch the ball just inside the pylon and put six on the board. The play came out of nowhere and after it I felt the best that I have about Wisconsin football all season. Thank you Chris Maragos!

As for the bad... beyond Tolzien and the WRs, a few other culprits contributed to this ugly loss. First off, where on earth was the kick return coverage on Ray Small? It's bad enough when you get burned by an opposing kick return for a TD - it's even worse when that kick return was for 96 yards and largely straight up the middle. The missed tackles on that play were simply inexcusable. I hope that Coach Bielema makes the ST have extra practices or run laps this week in response.

Also, the coaching. It seemed that the coaches upstairs were either asleep or taking a bathroom break during the second quarter, as they missed an easy challenge that could have led to the Badgers heading into halftime with the lead. With just under two minutes left in the half, Pryor threw to TE Jake Ballard for a first down. The only problem was, Jake Ballard did not catch the throw. Rather, he caught on a hop after the nose of the ball grazed the field. Had Wisconsin been paying attention, a challenge would have overturned the call and perhaps the next several incompletes thrown by Pryor would have ended the OSU drive with a punt instead of a TD.

As painful as the second half of this game was to watch, it's only one game and one game in which I expected the Badgers to lose. Next week Wisconsin gets an undefeated Hawkeye team at Camp Randall. As good as the Hawkeyes have been this year, their two past wins against Michigan and Arkansas State both came down to the final minutes, and that's in front of a home crowd. The Badgers will certainly have their hands full, but hopefully the more forgiving confines of Camp Randall can help them pull off the upset. Tolzien seems to be more consistent at home, so I have high hopes for this game. In fact, I'm going to call it right now. I say Wisconsin hands the Hawkeyes their first defeat next week and wins by a TD. Hopefully, I'm right.

On to week 7, On to the second half, and ON WISCONSIN!!