Share All sharing options for: The Rivalry Is Watching You: Iowa LB Pat Angerer v. Michigan

This week, I chose to watch Pat Angerer take on the zone read of Michigan. Would the Michigan O-Line get to the 2nd level and mitigate the effect of PA? Would Pat turn Tate Forcier's lights out? Is this all-conference MLB worthy of the praise lavished on him since the Penn State game?

Lined up in an offset 4-2, Angerer is almost heads up on a WR. He bumps the WR and ignores the Forcier run. If Tate doesn't slip, this is a huge play for the Wolverines. Lined up on the other side (strong side), PA adjusts and dives at Minor, missing the tackle. Now at MLB, PA sniffs out the play and easily chases down Minor. Lines up on the inside slot receiver and chases him down the field as Forcier whips a pick to Hunter.

On this kickoff return, Stonum got absolutely killed by a backup Iowan, btw. PA as the MLB, gets shielded easily by the OT and Minor gets a 7 yard gain. Next play, PA run blitzes and gets picked off again by the OT. Not swimming past those blocks yet. Reads pass correctly on third down, but cannot stay with Martavious Odoms and gives up a completion. 2nd and five and PA is not fooled by the read option. Forcier looks at Angerer and falls down. PA picks up Forcier. Seems like a good guy. 4th down and the Wolverines go for it; PA bumps and holds the slot receiver while Forcier scrambles for a first down.

Hunter and Klug clean up the blocking on first down and PA gets a tackle for no gain. After a long pass, the Wolverines run away from PA and score from three yards out.

MLB, PA is eaten up by an OL and Minor flies by him. MLB again, but the Iowa outside contain works well and PA jogs over to watch his teammates clean up. First down, Forcier fumbles the ball off his foot and Iowa recovers. Angerer had read the screen anyways.

UM runs right at PA, who holds up the tight end until help arrives. Minor still gets 7. PA blitzes again, but Forcier throws for the first. Forcier scrambles on the read option and Angerer misses the tackle, but forces Tate back into the middle.

Lined up offset middle, Angerer takes on a block but the defense pretty much cleans up. Another blitz from the outside but PA doesn't get close to Tate. Hunter is a killer btw. Now third down, PA drops back in Zone and then chases Forcier down on the scramble, but someone else ends up making the tackle. Sort of a reoccurring theme.

The announcers have embarked on a conversation about keeping balls warm, slippery balls, and Forcier being unable to handle the Michigan balls. Anyways, Angerer is again pushed out of the way by an OL, but the run is stuffed anyways. After a Forcier scramble and the lucky long completion to Odoms, PA makes his first big play. Bombing down the line, PA and Klug slam into Minor and force a fumble. 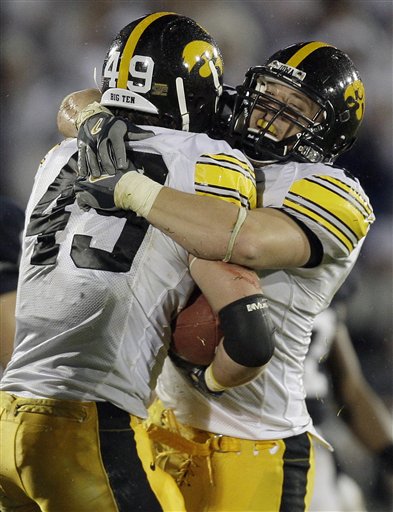 As the MLB, PA flows to the ball on first down, but is unable to make a play...so someone else does. It's punt time after a low Forcier throw and a Binns knock down.

Angerer drops into pass coverage and moves properly with the roll out. He does the same on the next play. Michigan is not throwing the ball anywhere near Angerer, a mistake that too many teams make. Plus, PA is never out of position. On third down, PA sticks with an inside slot receiver running an out. It doesn't matter, Binns knocks another ball down.

Other "Watching You" Articles

Playing at home versus Cali, Adam Weber hates throwing the ball away and loves Eric Decker.

Ian Thomas, promising Illinois linebacker, is a coach on the field even as a sophomore against Illinois State.

MLB again, Angerer holds up Minor for five yards. Michigan switches to the I-Form and Angerer is double teamed - Minor picks up a first down. Now Michigan is running right at PA and a fullback cuts Angerer down, allowing Minor to fly by. UM is driving, it's first down. Forcier playactions right, but PA doesn't allow himself to be sucked into the line, holding his ground and forcing a dump off to the tailback. Now second and six, Michigan pounds the ball at Hunter and the left side of the Iowa line. PA is blocked by two Wolverines and Minor picks up another first down. The Power-I is finally moving the Hawkeye line and PA isn't able to fight off the blocks of the O-Line. First and goal, RichRod isn't throwing anymore, instead running directly at PA, who is blanketed by the offensive tackle. If your OT is getting to the MLB in the zone spread, it's a great sign. On second and goal, Minor scores easily as the d-line gets caved in.

Michigan is pinned at the two yard line and Iowa is hoping for a safety, ala two weeks ago. PA is offset middle; he avoids a block, chops his feet, but it doesn't matter because Klug makes a tackle for no gain. After Iowa almost gets a coverage safety, Forcier rolls right to throw the bomb and Angerer almost gets to Tate in the end zone.

Angerer is getting no balls thrown his way. Dropping in coverage, Forcier simply won't toss a ball over the middle. Second down now - a Michigan draw doesn't fool PA, who gets half a tackle for helping slam Minor to the ground. On third down, Clayborn (literally) concusses Forcier and another incompletion follows; PA was running with the slot receiver downfield.

A concussed and struggling Forcier is benched by RichRod, installing Denard Robinson in at quarterback. As Michigan State said last week, if Denards in, their running the ball. This should provide more excitement for Angerer. First Down and 10 - Angerer collides with Minor, but Denard runs right by for an 8 yard gain. Second and 2, PA skates down the line and smacks Denard, who barely picks up the first down. First and ten - a simple Robinson run and PA hangs onto the track star until help arrives. Second and five - finally a pass, a completion to the sideline to pick up the first. First and ten - PA as a true MLB, fights off a block and stops Denard again. Second and seven - Denard scrambles, Angerer gets juked, first down Meechigan. First and ten - Denard sprint middle left and PA detaches from a block enough to make another tackle after an eight yard gain. Second and two - Robinson throws a quick sit down route for a first down. First and goal - Angerer fills the hole and Clayborn lights Mike Shaw up. Second and goal - a quarterback sweep and it's third and goal, three yards to go. Some confusion on defense and Robinson dives by Angerer for a TD.

PA can line up all over the field; it's obvious Ferentz has complete confidence in his veteran linebacker. I thought all those interceptions he accumulated last year were luck - I was wrong, he's fantastic in pass coverage. Not only does he run downfield comfortably in coverage, but he matches up well with slot receivers too. Oh, he's tough as nails too, but I assume that's a given for Iowa linebackers. On the final drive, we finally saw Michigan challenge Angerer, but he did well to stop Robinson from breaking a long run. It's too bad Iowa won't face that many big time passing attacks - it would be a joy to watch him against an active pass catching tight end or quick slot receivers.

Physically, PA moves his hips well and moves smoothly instead of jerking around for fakes. He's not quick, but his good football instinct allows him to make up for the lack of quickness.The Iowa defense gets contributions from so many players that Angerer (who will make all-conf bearing a disaster) didn't have to do much of anything for most of the game. Does PA have any weaknesses? He doesn't lean into offensive lineman to fight for position, nor does he swim move effectively by, instead choosing to hand fight and ward them off. The seconds he spent jousting allowed Minor to break through for first downs. But that's nitpicking - I guess we'll see how he handles the stiff arms of Pryor and the precision of Cousins.

When a player comes from a long line of dominant linebackers and sports the coolest last name in football, it's easy for the hype machine to go into undeserved overdrive. But a healthy Pat Angerer has maintained his quickness and excellent form as the season has worn on - it will be exciting to see him take on Pryor's stiffarms and the finesse of Cousins.