Share All sharing options for: The Big Ten at the Midpoint (Part 1 of 3) 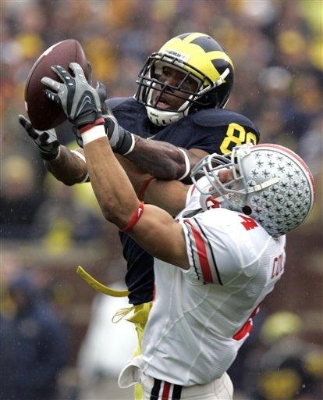 What one Big Ten player would you import onto the Michigan Wolverines' roster to give them the best chance of winning the Big Ten next year?

A decent safety would instantly change the complexion of the Wolverine defense. Michigan's secondary is injured, inexperienced, and just lost Boubacar Cissoko to suspention. His backup, JT Floyd, was ineffective, forcing Greg Robinson to move safety Troy Woolfolk to cornerback. The Wolverines are giving up the third most passing yards in the Big Ten, having been torched by Jimmy Clausen, Ben Chappell, and most recently Ricky Stanzi. I would remedy this situation by leaving Woolfolk and Donovan Warren at the corners and importing Kurt Coleman from OSU onto the Michigan team. Coleman is a ballhawking, hard hitting strong safety who would give Michigan a veteran presence in the middle of their secondary and stop the big plays that killed them against Iowa.

Here's Part II and Part III of the midpoint assessment.

What team has been the biggest disappointment this season?

Without question it has to be Illinois.  In fact, anybody who would answer this question differently probably deserves a quick kick to the seeds. This very blog predicted that the Illini would be an 8 or 9 win team, and go to play Georgia in the Outback bowl.  The fact is this team is not good.  The early line is that they are favored over the Hoosiers this weekend by a couple of points, and I would have to question why?  The Illini SHOULD have more talent than the Hoosiers, but Indiana has played better than Illinois this season.  Ron Zook is a good recruiter, but that might be where his talent stops. 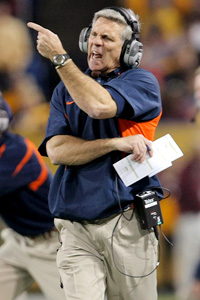 What team has been the most pleasant surprise this season?

I may get some flak for writing this, since I am the quasi-Wisconsin writer around these parts, but I have to go with the Badgers. Sure, arguments can be made for Iowa and Michigan. But, let's be honest here, while we may not have expected (save for perhaps Bama Hawkeye) Iowa to be 6-0 right now, we all knew they'd be good this year. Michigan, of course, came out of nowhere when most of us expected them to be enjoying the Rotel at the bottom of the conference. Yet, lately it seems as though Forcier has turned back into a freshman pumpkin, and it looks like they'll realistically be a 7-5 team going into bowl season. Wisconsin, on the other hand, realistically could be 10-2, or 11-1 with a well placed upset going into the bowls.

This, to me, qualifies as the most pleasant surprise given the surrounding circumstances. Many a Wisconsin fan had been at least considering calling for Bielema's  head after last year, especially if we had another abysmal season. Many of us were questioning the selection of him as successor to Alvarez and wondering if he could win games when relying on his own recruits instead of those he inherited with his head coaching title. Beyond the coaching, there were questions a plenty about a QB who seemed like a career backup and a defense that was comprised largely of freshman and sophomores. Wisconsin is of course a few stupid mistakes away from being that 7-5 team again, but as we are only talking about the first half here, they are my most pleasant surprise of this season.

How does Ohio State's defense, with all those new faces, stack up with some of the wrecking crews that the Buckeyes have had this decade?

While every Ohio State defense since the holy grail unit of 2002 has played smart, and fundamentally solid football under the "bend but not break" banner, not all have possessed the core grit, and swarming intensity of this year's squad.  Let's start by considering how the other defenses this decade stack up:

Some readers might be surprised that I put the 2007 and 2008 classes as low as I do considering they were populated by household names like James Laurinaitis, Marcus Freeman, and Malcolm Jenkins.  While those units had textbook form, I've always felt they lacked the earnestness and aggressiveness of the 2005 Bobby Carpenter/A.J. Hawk squad.  For the last two seasons, our defense has played to not get beat, rather than to smother, intimidate, and wreck.  This is one of the reasons I think they struggled against spread offenses.

This year feels like a return to 2005.  Preseason no-names like Brian Rolle and Adam Spitler are flying all over the field, popping pads, and jumping routes.  Arguably the deepest defensive line of the decade is mangling blockers at the line of scrimmage, twisting, contorting, and having its way with centers, guards, and tackles.  (If you need any proof of this go back and look at what they did to USC, the "best" offensive line in the country).  Unlike the 2007/2008 classes, this year's troops are regularly getting pressure without having to blitz, and are forcing turnovers in key game situations (think early in the Illinois game, and all day against Wisconsin).

This defense just might be the meanest and fastest of the decade, but to compete with the star spangled units of 2006, and 2002 it needs an offense that's proficient enough to keep it off the field, and keep its legs fresh for late game stands.

If that offense materializes by 2010, the unit is primed to end the decade on a high note.

What was the defining moment of the first half of the 2009 season?

With a 10-5 lead over Iowa in the 4th Quarter, Penn State lined up to punt on a 4th and 3 from near midfield.  Iowa played it cautious and had a "Punt Safe" coverage in place.  There was one player assigned to catch the punt, nine players assigned to play defense against a possible fake, and one player assigned to rush the punter.  Luckily for Iowa, Adrian Clayborn was the player assigned to rush.  He made an inside move on blocker Nick Sukay, extended his giant, bear-like paws and swatted the punt of Jeremy Boone.  Blessed with a perfect carom, Clayborn scooped up the punt and strode 53 yards into the endzone.  11-10 Iowa.  Penn State would not lead again.

That play did more than just win the game for the Hawkeyes.  It shattered the preconceived notion that the entire Big Ten season could be boiled down to the date in November when Ohio State traveled to Happy Valley to face the Nittany Lions.  Suddenly, the league race looked a whole lot more open.  This wasn't going to be the two team race that we had las year.

Now, Iowa could lose their next two games and make their Penn State victory moot.  But today, at the halfway point, no moment looms larger than the instant in which Adrian Clayborn decided that Iowa would contend for the Big Ten title too. 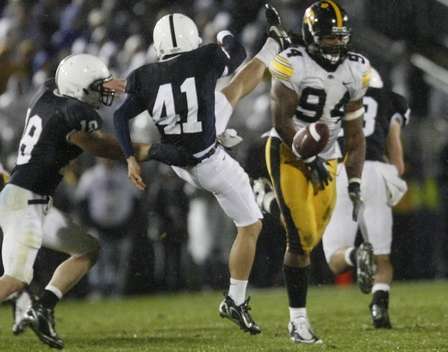