Share All sharing options for: The Big Ten at the Midpoint (Part 2 of 3)

Here's Part I and Part III of the midpoint assessment.

Who is the offensive player of the year in the Big Ten at the halfway point?

Although there's no clear standout, my vote goes to running back John Clay at Wisconsin.  Clay leads a league defined by ground gains in rushing.  Halfway through the season he's amassed 641 yards (4.8 yards a carry, 106.83 yards a game), meaning he'll easily be a 1,000 yard plus rusher this season.  At 6-2, 247 pounds, Clay's plodding, brutal presence between the tackles has opened up the passing lanes for quarterback Scott Tolzien, resulting in the most balanced offense in the Big Ten (1204 yards rushing, 1130 yards passing). 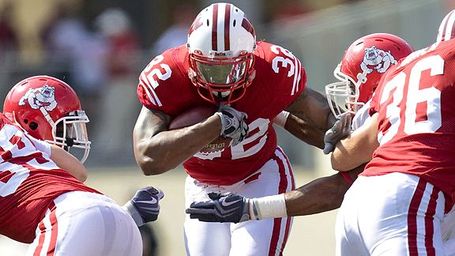 Who is the defensive player of the year in the Big Ten at the halfway point?

After the USC game, I called Law Buckeye and asked him who #36 was. "Oh that's Brian Rolle," I was told, "he's fast." This Florida product is the leader of the Big Ten's best defense. His speed and instincts have helped slow the power run games of Wisconsin and USC. 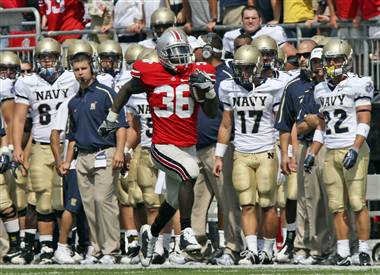 What is the status of the Penn State offensive line at the halfway point of the season?

It's a work in progress, but I definitely emphasize the progress.  Look, through the first six weeks of the season, Penn State has faced one legitimate defense.  Part of that was the design of Penn State's non-conference schedule.  Part of that was the luck of facing the dysfunctional Zook family early in the season.  But if you look at the line's play from each cupcake to the next, progress was made.  Yes, I think they'll have trouble with the Ohio State front seven.  That doesn't mean they're a bad line - everyone had/will have trouble with Ohio State's defense.

This offseason when I wrote about the danger of an inexperienced offensive line, I didn't mention one important factor.  It's this: if that line has the talent and the coaching, they will be substantially better by the end of the season than they will at the beginning.  I think we're going to see that from Penn State.

What is a realistic expectation for Northwestern's final record?

Taking off my lavender glasses, I'm going to put Northwestern's final record at 7-5 going into the bowls. To some, that may still seem overly optimistic, as they really only have two likely wins left on their schedule, in tangos with the queso portion of the conference, Indiana and Illinois. Two weeks ago my realistic expectations would have agreed with that assessment. Lately, though, I have seen the defense play like the 2008 edition I thought we were going to be getting this season. Yes, it was against Purdue and Miami of OH (who, were they in the Big 10, wouldn't even qualify for the queso bowl... take that Graham and Jon). If the defense continues to play like that, they could easily catch one of the better teams in the conference napping. There's also always schizophrenic Sparty who, though they look to be improving, could very easily drop this week's game in East Lansing. 7-5 is still deeply disappointing to me as a fan. I set 8 wins as my rock bottom threshold for happiness, so, barring extraordinary circumstances, this bowl season will not be a fun one for my NU side.

After four games, do you think that TCF Bank Stadium has provided the Gophers with a greater homefield advantage than the Metrodome did?

My opinion is that it's a bit premature to say that The Bank gives the Gophers a homefield advantage because the team is just 2-2 playing there so far.  Having said that, however, I do think it gives them a greater advantage than the Dome did.  I think it certainly is an advantage to the team because the fans are more excited, there is an actual college atmosphere, and I would think that has to carry over to the players.  I certainly don't think that there is anything shameful in our two losses (Cal and Wisky), but I do believe that Wisconsin was a very beatable team and that we did a lot to hand the Badgers that win.  That would not have happened if we had a true homefield advantage. Of course, some might argue that the way we played we shouldn't even have kept it as close as it was (on the scoreboard), and that the homefield advantage helped.  I can see that, but I'm nowhere near being ready to say that The Bank is a difficult place for other teams to play... which is what a true homefield advantage is. 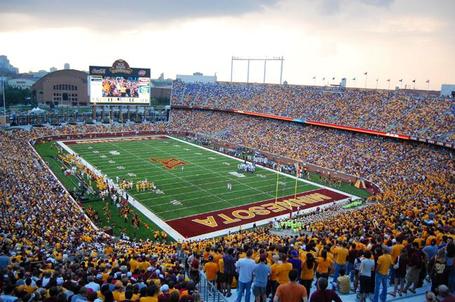