Share All sharing options for: The Big Ten at the Midpoint (Part 3 of 3)

Here's Part I and Part II of the midpoint assessment.

Who will win the Big Ten this season?

Ohio State will win the Big Ten. The three semi elite Big Ten teams (PSU, OSU, Iowa) all play each other. Iowa took the upper hand by knocking off Penn State, but the Hawkeyes look to be a less dominant team than the Bucks. I see OSU winning in Happy Valley and then coming home and emerging victorious against the Hawkeyes in a slugfest. For all the talk about Terrelle Pryor's arm punting by Iowa fans, Ricky Stanzi isn't exactly responsible with his throws. 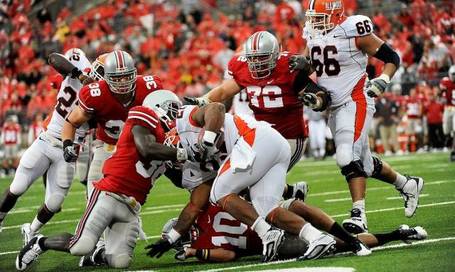 Ohio State, because I won't be able to sleep tonight if I say Iowa.  Look, I know Iowa is a good team, but I just don't buy that they are the Big Ten champ.  Their next two games (@ Wisky & @ Sparty) are pesky games, and I think it's possible they drop one of them.  They also still have to play at The Horseshoe, which is a game I just can't see them winning.  OSU has a tough stretch the last three games of the season, but PSU & Michigan both look beatable on their homefields, and having Iowa at home is a big advantage.

This depends on how Terrelle Pryor handles the next three games against Purdue, Minnesota, and New Mexico State.  Don't get me wrong, the Buckeyes will win all three.  But if Pryor can't establish a modest amount of offensive momentum, Ohio State is in trouble when it travels to State College on November 7th.

I think Iowa goes to Pasadena, but they don't win the conference outright.  Here's how:

Terrelle Pryor flops under the bright white halides of Beaver Stadium, and the Nittany Lions do just enough to win another low scoring contest.  The Buckeyes return the favor the following week however, by harassing the Hawkeyes at home, and taking advantage of Ricky Stanzi's interception itch.  Ohio State is just too physical for a spirited Michigan team in Ann Arbor.

Ohio State, Penn State, and Iowa all finish with one loss in conference.  How do we break the tie?  Here are the relevant provisions:

The two-team tie procedure specifies: If there is a tie for the championship, the winner of the game between these two teams shall represent the conference.

That means Iowa gets to smell the roses for the first time since 1991. 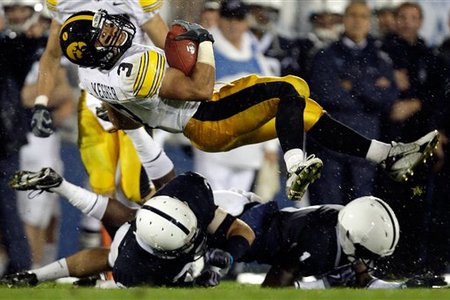 I love what Law Buckeye said, and wished that I could get on board with it.  I just can't.  I think that Iowa is going to drop a game in the next two weeks.  That, coupled with their loss at Columbus, keeps them from winning the title.  I think that Penn State loses to Michigan or Michigan State (don't write off Sparty yet.  I'm not predicting it, but they could find their way to 7-1).  That means that despite losing in Happy Valley, Ohio State's 7-1 conference record makes them the league champs all by themselves.

OSU. Sorry Hawkeye fans. I have you losing your date in Columbus, as well as an upset sneaking up on you. Despite Mr. Pryor, I think Ohio State runs the table in the rest of their conference games and that means that Brutus steals Cinderella's corn cob crown.