Week 7 in the Non-Con: What I Want

Share All sharing options for: Week 7 in the Non-Con: What I Want

Wow.  Not a lot to say about this.  I want to see the secondary get some meaningful reps and Denard Robinson make some reads in passing situations.  That said, doing it against the Hornets is nowhere near the same thing as doing it against Penn State next week. 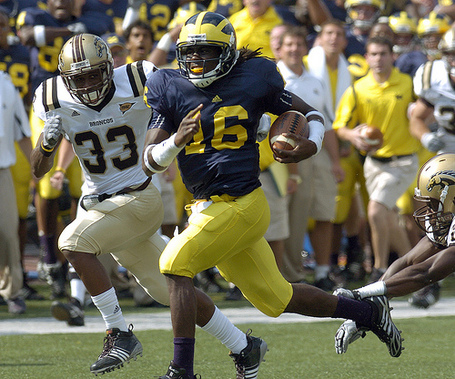 Make sure to go back and submit your picks for Week 7 of the Obligatory Predictions Contest. Weekly winners get a chance to write 500 words on the site. NEW this year is our season long competition - win the whole damn thing and we send you something amazing.

I want a blow out and a healthy Michigan squad in advance of the fascinating battle with Penn State.

A blowout.  And a lot of questions about whether Tate Forcier plays/should play in the game.

The Big Ten is 27-10 (.730) out of conference.  The league is 5-8 against BCS Conference teams (plus Notre Dame). Indiana's loss to Virginia guarantees that the Big Ten can finish with no better than a .500 record against the other BCS schools.  The league has two losses to non-BCS teams (Northern Illinois over Purdue and Central Michigan over Michigan State).