Who will be cursed by my MOTW this time? I chose to take a look at the Wildcat offensive attack and how they will scheme against an improving MSU defense. Northwestern''s schedule has been cake so far - which is why we predicted a 5-1 start.. But the 4-2 Wildcats cannot continue struggling against cupcakes ('Cuse, Miami OH, Eastern Michigan) and expect to suddenly become an improved team against the Spartans.

As Chris from SmartFootball wrote on TRE last week:

SmartFootball: Well Northwestern is a true spread team and has traditionally done a nice job with all the typical short spread passes that can be completed at a high clip...

I know a lot of Northwestern fans haven't been too pleased with the team's early struggles, but Kafka's passing efficiency has to be encouraging. He is averaging over a full yard more per attempt this year than C.J. Bacher did last year (7.2 compared to 6.0).

Kafka has followed in the steps of Basanez and Bacher, completing a Big Ten leading 67% of his passes. The effective short passes have also been damaging on third down, as the Wildcats have the second most effective 3rd down % in the Big Ten. On the flip side, the shotgun draws that sprung Tyrell Sutton so many times have been flat. Northwestern is 10th in the Big Ten in rushing at a paltry 122 yards per game.

Are the Wildcats doing anything different scheme wise? Not particularly. Kafka has run more in the last two games (18 carries against Purdue,15 against Miami OH), although not with the success people may have expected. Because of his tremendous athleticism, Fitz has been attempting to unleash him via draws, option runs, or outside quarterback sweeps. The NW Spread still attacks from a 3 wide or 4 wide set and Kafka has the potential to make every throw, including:

The bread and butter crossing patterns, both short and deep

I remember Northwestern running some great wide receiver screens and halfback screens in the preceding years, but I feel like there has been less of that this year. Maybe someone can correct me or fill me in on this.

If we want to talk about improved defenses, let's talk about the Spartan unit under Pat Narduzzi. Narduzzi, weary of his inexperienced secondary, decided to play some soft coverage against Central Michigan and Notre Dame. This backfired tremendously, as Narduzzi failed to realize that both Dan Lefevour and Jimmy Clausen can throw six yard outs and dump downs to running backs or tight ends. Let me give you the play by play on the game winning CMU drive:

The Spartans cornerbacks began the play 5-7 yards off the LOS and retreated more when the ball was snapped. Needless to say, the underneath routes were open. 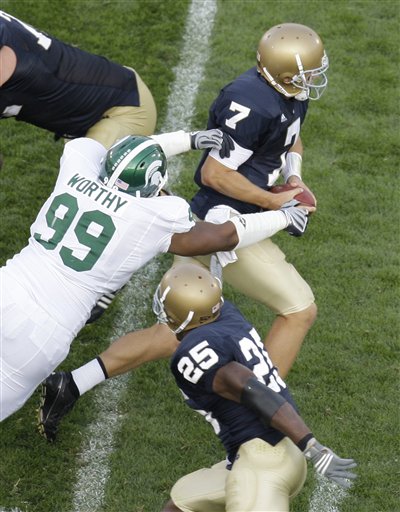 After a 1-3 start in which the defense allowed 29, 33, and 38 yards, Narduzzi finally rolled up his cornerbacks and decided to take away bubble screens and quick throws. It worked - Forcier and Williams/McGee were both forced to throw deeper into coverage. Jerel Worthy (a probable Freshman All-American selection at DT) began destroying offensive lineman, using a great swim move and some quick feet to help stuff the run games of both Michigan and Illini. The front four, passionless early, came around in a big way in Champaign-Urbana, sacking the Illini quarterbacks six times last week.

What Can We Expect Saturday?

We predicted a 6-6 Northwestern team this year. Their schedule is so charmin' soft, I felt this was an insult from TRE. It looks like we were somewhat on target, but why?

LTP pointed out that NW seems to lack the killer instinct that separated the Wildcats from mediocre teams in 2008. Most of you didn't watch the Miami OH game last week, but that game exhibited a penalty laden NW squad that got pushed around by the worst in the nation RedHawks. Kafka threw high all day in good, non windy conditions, while the run game was hampered by bad blocking.

Here is my advice for Fitzgerald's game planning:

- Run early and if it fails, abandon it. CMU and Michigan couldn't run on the Spartans, thanks to the solid LB core led by Greg Jones. But when teams turn to throwing against the Spartans, things usually open up.

- Tell Kafka to get rid of the damn ball. His fumbles have come at the most inopportune times and he's been sacked second most in the Big Ten.

- Figure out early if Michigan State has rolled up cornerbacks onto the LOS. If they haven't, pound that short out and force them up.

Sparty, backed by a 14 point Vegas line and a rowdy crowd of 70k, is the obvious favorite. But Narduzzi and Dantonio must show a willingness to continue forcing quarterbacks to throw over linebackers and cornerbacks, instead of falling back into the soft zone. Michigan State has faced two ridiculously accurate quarterbacks and Kafka will be no different.