Thinking about the eternal "if a tree falls in the woods does it make a sound" question, I ask: Is there an outcome of Saturday night's pillowfight that would make you care about this game?

Probably not, I assume. But I still had numerous questions for this game: Would Juice Williams and Illinois show any wrinkles to their staid offensive system? Could the hyped up Hoosier linemen (Kirlew, Middleton, probable Freshman All-American Larry Black)  have a field day against the Big Tens worst offense? Would my new favorite Big Ten coach Bill Lynch continue the creative playcalling that has allowed Indiana to pick up tons of yards? Would God strike down the creator of those horrendous Hampton Inn commercials featuring the broadcasting couple? Does an Indiana win give them a fighting chance to get to a bowl game?

When a mediocre team plays a horrible team, certain expectations exist. There should be drive killing penalties, unexplainable fumbles, non-spiraling throws, etc. This game certainly didn't disappoint, although most of those aforementioned foibles were carried out by the Fighting Illini.

The Big Ten Network started out the broadcast by showing it's two announcers talking...with thousands of empty seats in the background. Whoops. Those fans who did attend seemed pretty damn spirited though. 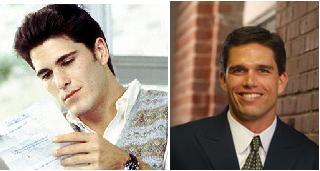 Microsoft Paint: It's what happens when inconsequential cellar dwellers play.

NOTES ON JUICE AND THE FIGHTING ILLINI

After awhile, I guess I just don't feel like "Fighting" should be associated with this team. How about the Middling Illini?

Juice, who was 22-37 for 258 yards and two touchdowns in maybe his best start of the year, showed he can occasionally make two types of throws, the sideline deep ball and the occasional sideline out route. Here is a list of throws he cannot make:

The two Juice fumbles that iced the game for Indiana were semi-inexcusable, but it's not like he was getting help from everyone else. A great second quarter drive ended in a momentum killing missed field goal, Jeff Cumberland dropped a ball that hit him in the numbers, and the Illini secondary missed tackles all night.

NOTES ON INDIANA AND THE FIGHTING BILL LYNCH'S

The first possession for the Hoosiers featured: the Single Wing (with Mitchell Evans), a Diamond formation, and Ben Chappell lining up as a wide receiver. Bill Lynch will NOT be phoning it in this year, thank you.

The Pistol really does offer a lot of options for Chappell. His fluid movement and misdirection fakes in the backfield show a certain level of comfort that makes this offense go. Is it odd that one of the Big Ten's best slant throwers resides in Bloomington? Also, major props to the cohesive nature of the Indiana passing game. It's a domino effect - Chappell sat in the pocket comfortably because he trusted his O-Line, the wide receivers ran some great routes and laid out for balls because they trust Chappell to deliver the ball, etc. It's the circle of life...and it moves us all.

After Tandon Doss caught a deep touchdown pass late in the game, he successfully executed a Big Ten record seven separate "Celebrating Wide Receiver Jumping Body Bumps." I like this way to celebrate - it's more complex than just patting and hugging, there's lots of movement and excitement, and sometimes overweight assistant coaches knock over their own players while in the act. Bravo.

Jammie Kirlew - All Big Ten Defensive End, second team. Done andddd done. He essentially ended the game by spinning past an OL and stripping the ball from Juice. And for those who were wondering, the first team DE's are some combination of O'Brien Schofield, Adrian Clayborn and Brandon Graham.

The Single Wing that Indiana has run effectively against most of their opponents is called the "Wild Mitch", referring to speedy backup QB Mitchell Evans (84 yards on the ground versus the Illini). This leads to another reoccurring theme - Many teams have the Single Wing now, but they all call it something specific and not so clever. Like the NYJets last Monday night, running the "Wild Jets" or something. If I coached a team, I would call my Single Wing formation "Standing Outside a Broken Phone Booth with Money in My Hand." It's got a nice, "man all alone" feeling to it.

I love Austin Thomas. That man will put his hat on anyone.

Larry Black Jr, the 300 lb freshman DT, looks hungry (hahaha) and has some active feet. Since he's from Cinci, I'm going to wager that he attended St. Xavier High School...Let me check...Nope, Wyoming High School. That was a bad miss.

Indiana's main wide receivers (Tandon Doss,  Damarlo Belcher, Terrance Turner) are an average size of 6' 4'' 207 lbs. Not only is that huge, but they give Chappell an excellent target to throw to. And even though no one will see/remember/acknowledge it, Doss made the second best catch in the Big Ten this year, a diving scoop for 15 yards while flying out of bounds. Second only to Deckers' "White Receiver What Now B****" touchdown against Cali when blood started dripping down his face post-catch.