Share All sharing options for: Is This a Down Year for the Big 10? The BCS Doesn't Think So...

One of the more oft-repeated truisms of the 2009-2010 college football season is that this is a "down year" for the Big 10 conference. Supposedly, the Big 10 is on a slide from its recent glory days when it was one of the more dominant BCS conferences.

In this meme, the Big 10 has been replaced by the SEC and the Big 12 and now ranks a solid third (sometimes even fourth, behind the Pac-10) in terms of conference power. The "fact" of the Big 10's down year is so widely known, it was even repeated by a SB Nation writer as recently as today in their aggregate coverage of the discussion surrounding the newly released BCS Rankings.

Those same rankings tell a different tale, however. According to the BCS rankings, there is a conference that is having a down year - but it isn't the Big 10. I looked at the rankings and, with the help of my trusty spreadsheet, compared the newly released BCS rankings to both the final and week 1 BCS rankings from 2006-2008 (2006 was the stopping point because that's the earliest year for which the polls in the BCS rankings are identical to the ones used today.) The results of my comparison may surprise you...

A recap and discussion of the weekend's action between undefeated Iowa and Wisconsin...

For the purposes of this analysis, I did not look at independant teams or teams from the MAC, MWC, WAC, C-USA, or Sun Belt. This comparison is thus just limited to the six BCS conferences. (*The 2009 data points are based on week 1 rankings, since we obviously don't have final rankings for this season yet.) 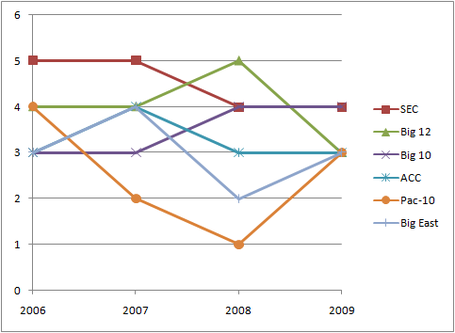 In the above graph, we see the year in question represented on the X-axis and the number of teams represented by each conference on the Y-axis. Each colored line represents one of the six conferences.

The Pac-10 was heavily represented in 2006 with four teams, but has declined every year since, with the exception of this year in which they increased their representation from two to three teams.

Finally, we can take a look at the Big 10. Similar to the SEC, the Big 10 has been represented by two different number of teams during the four years examined. Unlike the SEC, the Big 10's representation in the BCS Rankings has increased - having only three teams in the rankings in 2006 and 2007, and four teams in 2008 and 2009.

So far, it would seem that the Big 10 is actually having a year identical to last year - and an improvement over the 2006-2007 era. Of the major conferences, the one conference with a significant down year appears to be the Big 12. This intuitively makes sense. Sam Bradford's injury woes at Oklahoma along with the mediocrity of former representatives such as Texas Tech, Missouri, Nebraska, and Texas A&M has contributed to the decline in their overall conference representation.

But wait, you say. It doesn't seem fair to compare the 2009 Week 1 rankings to the final rankings from past years - after all, don't the teams shuffle in the weeks between the first released rankings and the final rankings? Well, yes, they do. However, while the specific teams represented may change from week to week, the number of teams each conference has in the rankings remains surprisingly consistent throughout the BCS ranking period.

A second graph bears this out: 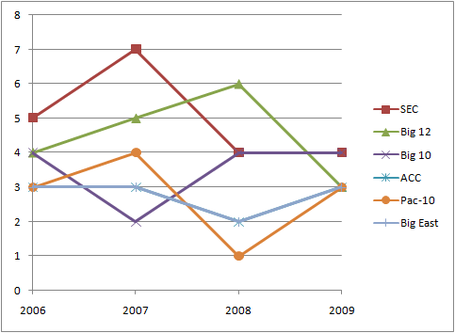 In this graph we see the number of teams represented in the week 1 BCS rankings by each conference from the years 2006-2009. Similar to the above graph, a few trends are apparent.

Digging deeper into this graph we can also see that, in comparison to 2008, the SEC has, like the Big 10 held steady, while the ACC, Big East, and Pac-10 have all improved. The lone conference to have a decline in representation in the week 1 rankings from 2008 to 2009 is our old friend, the Big 12.

One final argument that I've often heard is that, really, the full BCS rankings don't matter, only the top 10 places do. After all, there are four BCS bowls in addition to the national championship game, with the top 10 teams in the rankings usually somewhat close to the teams that go to these bowls. So, maybe conference power should really be measured by how many teams a conference has ultimately had ranked in the top 10 places at the end of the season.

Looking into this produces one more graph: 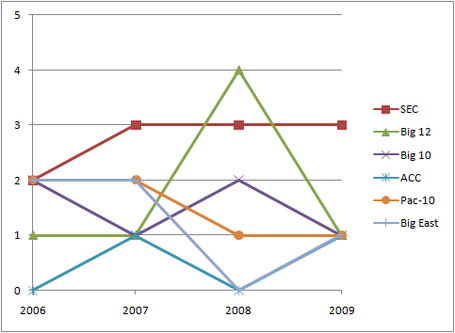 This graph shows the number of schools each conference had in the top 10 of the final BCS rankings from 2006-2009...

In fact, we notice looking at this graph that there is really only one other pattern that stands out. The Big 12 has consistently been represented by one team in the top 10 (usually Texas) in the years 2006, 2007, and 2009. In 2008, though, they were represented by a conference high of four teams in the top 10. That is the highest conference representation among the major conferences in all the years examined, higher than even the SEC can claim. Their descent from this lofty height back to having only one team in the top 10 certainly represents a major decline. This graph, then, like the others suggests that the conference having a down year in the 2009-2010 season is actually the Big 12, not the Big 10.

So... if the BCS rankings don't bear out the theory that the Big 10 is in the midst of a down year, why is that truism so prevalent? Well, I have a few hunches...

First, the ascendancy of the SEC over the last several years and the great year that the Big 12 had in 2008 seems to have pushed those two conferences to the forefront of commentators and voters thoughts when evaluating the conferences relative power among the BCS, regardless if this is matched by play on the field or not.

Also, the BCS rankings are seeing increasing representation from the non-BCS conferences and the independent schools within the top 10. While these conferences have always been represented in relatively consistent numbers within the entirety of the BCS rankings, their recent jump into the top 10 has pushed certain BCS conference schools out of or lower in the rankings, thus artificially deflating the stock of some of the teams in the Big 10. It can certainly be argued that these "outside" teams deserve their high rankings just as much as the teams in the Big 10, and this is a point that I wouldn't necessarily debate. However, their ascendancy is a possible contributor to the myth of the Big 10's decline.

Finally, while the middle schools of the SEC, the Big 12, and the Pac-10 are mediocre and the bottom schools truly rotten, the dominance of the conference power houses (Florida, Alabama, Texas, Oklahoma, and USC) casts a halo around the rest of the conference that makes their conference look stronger as a whole. With OSU's recent faltering, the Big 10 doesn't really have a star team that has the same effect.

Sure, Iowa is currently undefeated, but when even Vegas doesn't believe in you, it's hard to say that their record pulls the rest of the conference up in comparison to the other BCS conferences. This is compounded by some near losses on the part of Iowa to "easy" teams like Northern Iowa. Part of what helps Florida cast such a glow over some of the lesser SEC schools is that when they play teams perceived as easier they tend to beat them by 40 or 50 points. While I personally find such pummeling of inferior competition distasteful, it's clear that it makes an impact in the broadcast world. This is most easily illustrated by the attention that the major college football broadcasters - ESPN and CBS - pay to the SEC. Heck, they've even got a new SEC / ESPN logo these days. Dare to dream, I suppose...

Perhaps if Iowa continues their play and earns some style points along the way this all will change. The ideal situation for the Big 10 as far as reputation gathering goes, would be for the trio of Iowa, Penn State, and Ohio State (or another three, though those are currently the most likely) to return to dominance and stay there for a few years. This would then hopefully start to change the pervasive, yet misleading, aura of weakness around the Big 10.