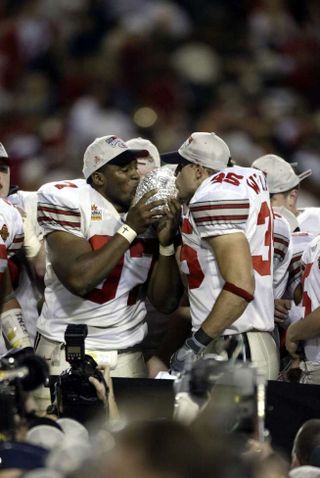 About the time Ricky Stanzi sealed Iowa's daring victory Saturday by taking a knee on a lame-duck P.A.T., I got a text message from my cousin Steve.  It read: "Iowa is a reincarnation of the 2002 bucks."

It's a flattering comparison for the Hawkeyes.  After all, the 2002 Buckeyes are the first and only team to go 14-0 in the history of our sport. They were the epitome of everything that's right -- and wrong -- with the Big Ten; a plodding, plain, and immediately likable rough and tumble crop of underdogs that refused to lose.  After a season of nailbiters, and overtime triumphs, the Bucks faced a a defending national champion Hurricane squad with a Heisman finalist quarterback, a Heisman finalist running back and a 34 game winning streak.

Four bone-crushing quarters, and two mesmerizing overtimes later, the scarlet came out on top: 31-24.  The win brought the Big Ten its 34th -- and most recent -- National Championship.

That was seven years ago.

Since then the Big Ten is 3-8 in BCS bowls (0-2 in the BCS National Championship).  A crown gem in the early part of the decade, the conference has slipped into a funk, as the great giants of the sport fell asleep at the wheel.  Strange shifts in parity have substituted crisp autumn leaves and cool November snaps for sweat, julips, and electric September nights in the swamp.  Bruising brutes and bloody-noses have been replaced with soft-zones and slow pokes.  Or so they would have us believe.

Still, there are signs everywhere that college football's most esteemed conference is on its way back, not the least of which are these Hawkeyes.  A powerful Iowa joins perennial patriarchs Ohio State and Penn State at the top of a league that with Wisconsin, Michigan State, and Michigan in the wings just might be the deepest in the country.  Sure, our ceiling might be just a bit lower than the spires atop the Pac 10, Big 12, and SEC.  But none of those leagues are as hotly contested six floors down.

Is Iowa predestined to earn a spot in the BCS National Championship Game?  Consider these striking similarities between the Hawkeyes and the 2002 Buckeyes.

Now, don't get me wrong.  There are plenty of significant diferences between the teams.  While both were/are defensive stalwarts, Ohio State's strength in 2002 was the defensive line, and weakness was at cornerback, while Iowa came into the season with holes at defensive tackle, but loaded in the midfield and the secondary.

Furthermore, Iowa's Ricky Stanzi has thrown more interceptions (8) eight games into the season, than Craig Krenzel did in all of 2002 (7).  These turnovers could ultimately be the difference between an undefeated and a two loss Iowa.

Ohio State faced its biggest challenge in 2002 in late-November with a visit from No. 12 Michigan.  Iowa will have to go on the road in mid-November to face a (presumably) top 15 Ohio State team.

If they can do the impossible, they just might have the credibility in the computers to jump Texas, and meet the winner of the SEC Championship in Pasadena.

But does a Big Ten team really deserve to play for the title against the best the speedy South has to offer?  Ask Ohio State, circa 2002, what it has to say about that.