Minnesota gave up over 500 yards to a previously struggling Buckeye team. I'm going to take a concise look at Lee Campell, one of the senior leaders on defense for Minnesota. How did the second leading tackler in the Big Ten factor into this defensive breakdown on Saturday? What are the NFL chances for the Big Ten's second leading tackler? Can the 240 lb. Campbell run with Pryor?

He's the MLB in this 5-3 formation on first down. Mini puts everyone in the box, stopping OSU for a two yard gain. After a Pryor scramble, LC blitzes from his MLB position but makes no impact on the Pryor incompletion. Punt time

Again the MLB, OSU is in shotgun one back formation, while the Gophers have walked five men up to the line dating Pryor to throw. LC moves smoothly in the backfield, onlto to find Brandon Saine running free to the other side. After a quick first down throw by Pryor, the Bucks have a first on their own 19. The Gophers aren't moved by a Buckeye power run and on second down, Campbell drops deep into zone coverage. It's third and long and LC goes into man on the tight end, physically bodying up on the TE. It doesn't matter - Triplett is beaten badly on a Pryor scramble and it's OSU first down on their own 33.

Mini has backed off of their 5 man front, switching to a 4-3 stack, with the LB's focusing on the middle of the field. Spread Read right and Campell is sucked up into the blocking zone, but a Gopher cornerback pops up to make a great TFL. On second down, LC drops into zone coverage and forces another Pryor scramble for three yards. Third and long, Pyror finds a hole in this Mini zone and its first down on the 50.

Tradition I by the Bucks, LC doesn't bite on the play fake and follows Pryor on the rollout before Pryor completes a 17 yard pass. The Bucks are driving thanks to TP's arm and Campbell hasn't made an impact play yet. First and ten on the MN 34: Pryor option runs right. LC picks up his first tackle after fighting off two blocks, but he finds TP 7 yards downfield. Second and short and the Bucks run right at Campell, who falls back under the weight of Browning and a knocked over Gopher DT. First down again.

Quick slant to Posey, who gets smacked in the face by LC, forces the pass incomplete. I'll call that a pass breakup. On second zone, Saine runs righ, hurdles over a blocker and is leveled by Campbell for another tackle. We hear LC yell CMON into the HD mics. That play made me feel alive. It's third down and Pryor runs right before getting dragged down to cause fourth down. The Bucks go for it on a power dive with Saine - LC gets blocked right before he almost makes a TFL. You can't deny that this guy has a nose for the ball.

This drive is making my fingers hurt from all the typing. God. First and ten on the 13, Pryor runs away from LC's side and Triplett and Sherrills contain the play. After a TP incompletion, the Gophs blitz on third down and stuff Pryor. Field Goal MISS, the Gophers have held.

A zone read doesn't fool LC, but he gets sucked into the zone blocking hole and vacates middle. Saine runs for 15. First mistake by LC. First and 10 on the OSU 37. Again LC gets sucked in middle and Saine makes a small cutback for 5. After a PI call - a really bad PI call, Pryor challenges the Gophers zone pass coverage and throws over LC incomplete. Quick pass right and its third and five. Minnesota runs a clever defensive formation, putting Triplett and LC into blitz lanes, than only sending Triplett, who knocks the ball down. No impact plays for LC, but its punt time.

Mini is not in the 5 or six man line anymore, figuring OSU can throw the ball a bit today. A reverse is sniffed out by LC and another Mini defender for a TFL. That great play is wiped out by a personal foul...Everyone knows what happens next, Posey touchdown deep.

First and ten on the Bucks own 33, basic 4-3 from Mini. Tackle by LC (his third), but Saine gets 6 anyways. The DT's are being moved any which way. Second and short and LC smacks Saine at the first down marker while someone causes a fumble, which apparently wasn't a fumble. Fourth tackle by LC and third and inches, Pryor sneaks for a first down.

Pryor goes deep on first down after a Minnesota blitz is stopped easily. Second down, LC misses his first tackle as Pryor shakes him off in the backfield on route of a 12 yard gain. Negated due to holding and after another incomplete deep ball by Pryor, it's third and long hasn't challenged LC in the middle zone. TP scrambles and I would like to make an observation - Triplett has looked lost today against Pryor.

First and ten, OSU runs up the middle by Small, Triplett and LC stuff him. Another TP incompletion, third and long and a bit longer thanks to a false start. Short completion and another Buckeye punt.

Mini stunts and blitzes on first down, but TP gets away and throws over LC. First down and Mini has dropped into a zone, TP rolls around until he gets sacked. A surprisingly accurate throw right in front of Sherrills leads to third and short, when TP drives forward for a first down. After Pryor breaks two sack attempts and throws a ball away, Mini blitzes but TP throws the ball to a breaking Posey. The Minnesota man defense is giving up mucho yards. Tired of his success on this drive, TP throws the ball to Kyle Theret and the half is complete.

At the half - 279 Buckeye yards, 7 points, one missed FG, one interception

A Gopher fumble hands OSU the ball deep in Mini territory. LC and Triplett get sucked into the middle again and Jordan Hall gets a first down before LC late hits him oob - no call. First down on the OSU 15 - a simple off tackle picks up four before Campbell makes a big hit. On second down, Minnesota plays the zone read perfectly, except TP stiff arms a defender in the face and glides in for a TD.

Zone read is stuffed by the DL, but second down sees a TP scramble right for a first down. No way Campell is catching TP from the side pursuit. First and ten from around the OSU 40, everyone takes a shot at Jordan Hall and then LC cleans up - 5 tackles, 1 TFL. Incompletion, punt time

Weber fumble and I'm back already. Buckeye ball on the MN 22. Finally, an effective Gopher blitz and a dump down leads to a loss of four. Second and long, Pryor runs for a TD on a cutback - this is quickly negated by a holding call. First down on the MN 16, power run up the middle and Campbell wards off a block to drag down the RB before the chains can be moved. Third and one, Campbell gets another tackle, grabbing Small's foot and tripping him after a two yard run. OSU is running downhill now, as the momentum has tipped to the Bucks. Hall runs away from LC's side and #4 of Minnesota gets sucked in horribly. LC drags Hall into the end zone and pops up to stare menancingly at the side of the Gopher defense which showed so little panache on the last run.

Campbell hides between two blockers and stands up Hall for a one yard run. Another LC tackle, he is a monster run stopper. Second and 9, TP throws a strike to the sidelines on a rollout, first down OSU. Rollout pryor on first down and #27 got beaten like a mule. Game over flip flip flip.

A power I formation for OSU leads to a power run up the middle. Campbell is set as the MLB and slams into Jermil Martin for another tackle, but Martin gets six yards. Second down and short, OSU is just pounding the ball and it's another Buckeye first. The Bucks haven't fallen asleep and run a reverse - the ball carrier is pulled down by Triplett but LC had smelled it out also. Second down and here comes Martin again - the Gophers are worn out and LC is eaten up by an unimpeded blocker while Martin rolls into the endzone for a long TD run. I've had enough of this, time for conclusions. 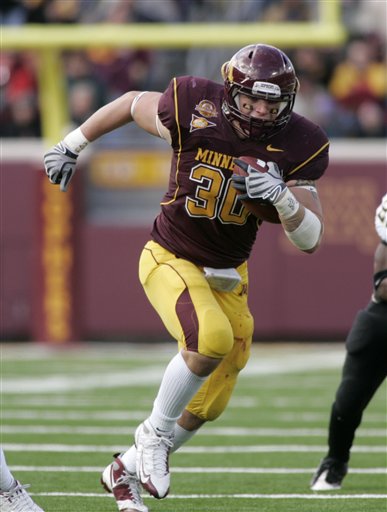 Discussion: Campbell hits with all of that 240 lb. frame and he is rarely overrun by lineman (except on the final TD). He missed one tackle all day, whiffing on Pryor in the backfield. His lateral movement is not as fluid as Greg Jones, but that's expected of a 240 lb. man. As run stopping linebackers go, Campbell is right there with Pat Angerer as the complete package.

One issue I have is the schematic problems that Minnesota's defense sets up. The two stud linebackers, LC and Triplett, are grouped too closely together in the middle of that 4-3 when they should have had more space between. This bad spacing led to about 5 instances where they both flowed to the play and then watched the ballcarrier cutback for big yards.