A Little Rest Does a Badger Good: Wisconsin Shuts-out Purdue, 37-0

Share All sharing options for: A Little Rest Does a Badger Good: Wisconsin Shuts-out Purdue, 37-0

Well now that's more like it. I do enjoy starting my Saturday off with a completely dominating victory by the Wisconsin Badgers. Granted, it was against the Purdue Boilermakers - not exactly the class of the Big 10 this season - but after the way the Badgers have been playing the last few weeks, it was quite satisfying.

It seems as though Wisconsin's bye week came at exactly the right time this year. Like my Badgers, I also took some rest and relaxation time, returning to the dairy state to visit family and escape the grind of the midpoint of the law school semester. It seems as though this time in the college football season has much in common with my 1L year. The Badgers and I both came out of the gate strong - staying on top of non-con foes and contracts readings. But both of us stumbled a bit through the meat of the conference schedule and midterms, staggering into this past week just hoping for a break and a time to catch our breaths. While Bucky rested up from concussions and contusions I too had an injury break - seriously, that carpal tunnel is a bitch.

Of course, it did help the newly rejuvenated Badgers that the Purdue team that showed up at Camp Randall looked more like the Boilermakers of the beginning of the season than the team that stunned Ohio State and rolled over Illinois. Purdue's offense once again lost the turnover battle, losing two fumbles and tossing one INT to Wisconsin's single garbage time interception. This alone would seem to be a significant hurdle for Purdue to climb, but unfortunately for them, it was also accompanied by a rash of drops among their receiving core. I don't have a total of the number of balls that bounced off their buttery fingers, but it seemed that any time Purdue got a bit offensive momentum, they were undone by a receiver forced incompletion. This had the effect of killing most of their drives before they even got started. Some of these incompletes were due to the aggressive and solid play of the Wisconsin D, who showed great coverage, especially in the secondary. The efforts of the secondary kept Purdue from making big plays - their longest pass play went for only 16 yards, and the linebacker Culmer St. Jean seemed to be tackling guys all over the field.

In fact, with one notable exception, almost everything about this game was positive, and I can't recall a recent conference game that has been quite as fun to watch as this one.

More about that exception as well as my takes on the great, the good, and the mediocre after the jump...

Graham takes a look at the defenses in the Big 10...

My week 7 recap of the Iowa travesty... 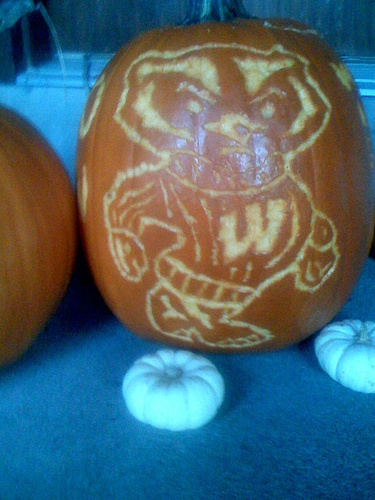 My Bucky the Badger pumpkin wishes you a happy Halloween!

As I said above, there really was not much, if anything, bad about the play of Wisconsin this game. So, instead of going with the tried and true (and some might say cliche) break down of the good, the bad, and the ugly, I'll be bringing you an edition of the great, the good, and the medicore.

John Clay: Big, bad John Clay is baaack, and I am quite happy to see him return from the bye in apparently good health. Clay took a huge hit in the Iowa game two weeks ago and completely lost effectiveness during that game's second half. He suffered some sort of leg injury and I feared that he might have been out for a few games or done for the season. Instead, Clay rolled over Purdue's run defense for a total of 123 yards and 3 TDs. He, along with Philip Welch, was the entirety of the Badger offense today. If Clay keeps this rate of production up against Indiana, Michigan, Northwestern, and Hawaii he should easily surpass 1,000 yards and may make it into the upper teens in TDs. Those would be very nice stats from a guy who wasn't even the sole running back going into the season.

The defense: The young Badger defense, which had been plagued by inconsistency of late, giving up twice as many second half points as first half points during their last two games, stepped up today and showed why they should be feared in the conference for the next several years. I touched on the play of the secondary above, but really, the entirety of the defense played well. They had a consistent pass rush on Joey Elliot, and managed to contain Ralph Bolden to only 37 yards on 10 carries. And what's more, they managed to not fold in the second half as they have done several times before this season, preserving the shutout. They started strong and finished strong, which is what I want to see out of them on a weekly basis.

Philip Welch: Welch has been struggling lately so it was good to see him post another perfect game. Welch made three field goals, for 22, 32, and 42 yards as well as four extra points. Welch was sporting spiffy new black socks today and I say, if a wardrobe change is what it takes for our kicker to be consistent, then lets just have him wear whatever color socks he wants. Red socks? Black socks? Those rainbow socks with the cute little toe thingies? Fine by me! Wisconsin is a very good team when it comes to scoring in the red zone, but for the times when the offense fails to punch it in, we need our kicker to be able to make the chip shots and ensure points on the board. Hopefully Welch will continue playing like he did today for the rest of the season.

Lance Kendricks: Kendricks had a solid game at tight end today, even despite the lack of a Badgers passing game. Kendricks was brought into the run game and managed 91 yards on 4 carries, with his longest being a brusing 51 yarder. Wisconsin has always had a great tight end team between Garrett Graham and Kendricks, but it was heartening to see him make an impact even when Tolzien was pretty much a non-entity.

Special teams: I have a bone to pick with part of the special teams below, but I would like to mention the blocked punt by David Gilbert which was returned into the end zone for a touch down by Aaron Henry. This turned a 17-0 advantage into a 24-0 pounding going into the half. It's good to see all units of the team keep up the pressure and grind their opponents down instead of letting them make adjustments and get back into the game.

Scott Tolzien: I have been one of the bigger Scott Tolzien bosoters in the blog world, but his play the last few weeks has been on the bad side of medicore. Coming into this game he had five interceptions and no TD passes in the last two weeks, an alarming change from his 9-3 TD-INT ratio through the first five games of the season. Well, he didn't throw any interceptions today... but that was largely because the coaching staff decided to take the ball out of his hands. He threw only 13 times with six completions for 87 yards, no TDs, and no INTs. On the one hand, I feel a bit bad about quibbling with this decision when it seems to have led to the shutout win. On the other hand, I wonder if Tolzien's confidence hadn't taken a hit in the last two games, and it might have been nice for him to throw a TD or at least triple digit yardage coming off the bye. Hopefully Tolzien can regain his confidence and performance levels from the start of the season and help carry the Badgers to a bowl victory this year.

Special teams punt returning: David Gilreath, I'm looking at you. Gilreath had one or two good punt returns when the Badgers were already up by 24, but he made a completely inexcusable decision on the first punt return of the day, when Wisconsin was only up by 7. Gilreath caught the ball at the 5 and then somehow managed to run sideways and backwards for a loss of 2 to pin Wisconsin on the 3 yard line. This has been going on all season and it has got to stop. I don't know whether we need a different return man or an actual special teams coach, but something needs to change. Wisconsin cannot keep getting hamstrung by its own return game if it expects to contend at the top of the Big 10 or in bowl games.

Those two issues aside, Bucky played a solid game today and looked like the 5-0 team from the start of the season instead of the 0-2 team from the last few weeks. I'll conclude this wrap-up with wishes for an awesome and safe halloween for everyone up in Madison (I wish I was there!) See you next week and...