Chris from SmartFootball helps us all fulfill our deep yearning to understand what the hell just happened while we're watching college football. He also contributes to Yahoo!/Rivals and The New York Times' The Fifth Down. Although a fan of Purdue, he is doing his best here to be neutral, for what it's worth. A huge thanks to Chris for his excellent analysis and his willingness to pay attention to a 1-4 Boilermaker team.

TRE: Pulling a "Juice Williams" will, for the next 5 years, mean underperforming contrary to everyone's (including Phil Steele's) expectations. What has been the key to Ron Zook not unlocking Juice's potential? And what is the challenge of taking an outstanding athlete and attempting to turn them into a quarterback who needs to make reads and be a field leader? (Ed Note: And how ironic is this - on the day Rashard Menhall blows up for 170 yards and two TD's against the Chargers, Juice is demoted for Eddie McGee)

SF: To use Orson Swindle's moniker, how [COACH REDACTED] could push (transform? Keep? Stagnate? Manipulate?] Juice Williams into a [QUARTERBACK REDACTED] is a bit beyond me. Based on last year's stats, I too thought Williams would at least keep improving in the sense that he could put up some numbers, though he still might turn it over too much. Indeed, it looked like he had more weapons than he had the year before with the addition of the highly touted Florida transfer Jarred Fayson. Instead Arrelious Benn averages 13.8 yards receiving per game (Georgia's A.J. Green averages 17.57 yards per catch), and the offense has taken an enormous step backward. 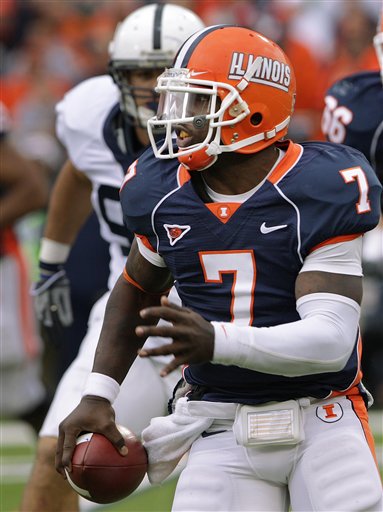 So while it is obviously challenging to turn an athlete into a quarterback and a leader, it seemed like Juice had already started to do that by being far and away the Big 10's yardage leader last year. But in general the problems are like you'd expect: working on the details of quarterbacking. Working with a great athlete presents unique problems because you don't necessarily name the guy your starter because he shows an aptitude for the traditional quarterback metrics, and sometimes you find out that a guy can't develop them. There's nothing inherently wrong with choosing a guy for that reason - remember, Juice was the Illini's leading rusher last year, and is second on the team this season. Yet when a guy without those athletic skills makes a mistake with basic quarterbacking he just makes a mistake; a guy who is also a great athlete may build bad habits by relying on that athleticism. Or simply his athleticism might hide his bad habits; consider Vince Young's transition to the pros. Developing a quarterback is always a crap shoot, but the Juice Williams saga has been a particularly strange one. In any event, this year for Illinois looks very bleak, and next year both [COACH] and [QUARTERBACK REDACTED] will be gone.

Trips Right, Quick pass to Y, Z blocks down on the hybrid defender, X blocks the Michigan cornerback, Y easily picks up 8-12 yards before finally being tackled or pushed out of bounds by the LB.

Here are my questions: After the first time MSU ran this, shouldn't Michigan have altered their defense? What's the proper way to defend this screen?

SF: I'll begin with a quote from Brian Cook of MGo:

"[Michigan defensive coordinator Greg] Robinson's madden[ing] inability to adjust to the bubble screens was, uh, maddening. I'm at a loss to see how Michigan can't even throw it anymore but Michigan State can just line up in a twins set and have it open time after time. What happened to the defense we saw against Minnesota last year when Morgan Trent actually arrived before the ball on one?"

I'm not really sure why they couldn't defend it. And the biggest answer for defending the bubble screen is to have bodies to defend it. This is the fundamental chess match of the spread: they have enough constraint plays like the bubbles to force the defense to spread with the offense, thus simplifying the numbers game for them. If you don't adjust, you are basically giving up free plays. The fact that Michigan seemed unable to defend this considering their own offense is a spread team is, to use Brian's phrase, "maddening." There can be a bit more to it but on a very basic level is it math: three receivers and two defenders equals two blockers and a guy with a lot of running room, while three receivers and three defenders equals an unblocked defender who can make the tackle. Without video I can't give too much more insight there.

TRE: Northwestern has a bunch of two and three star players at its skill positions, but every year they manage to complete passes at an unusually high percentage. This year is no different, as Mike Kafka completed 63% against Purdue and 70% on the season. Did you see anything during the Purdue game that gives clues to this success?

SmartFootball: Well Northwestern is a true spread team and has traditionally done a nice job with all the typical short spread passes that can be completed at a high clip. Despite being having a lineage of being spread, they have had a lot of turnover at their offensive coordinator spot, as current OC Mick McCall has only been there two years. He was a veteran of Bowling Green where he coached under Gregg Brandon, who took over for Urban Meyer when he left. They put up impressive numbers there, especially with QBs Josh Harris and Omar Jacobs. I know a lot of Northwestern fans haven't been too pleased with the team's early struggles, but Kafka's passing efficiency has to be encouraging. He is averaging over a full yard more per attempt this year than C.J. Bacher did last year (7.2 compared to 6.0).

The biggest problem for Northwestern - and certainly so against Purdue - has been their red zone conversion percentage. They have only turned 54.55% of their red zone appearances into touchdowns, which puts them ninth in the Big 10 and 80th in the country in that stat.

Stay tuned tomorrow for Part 2 with SmartFootball, where Chris shows why Purdue should be 5-0. Just kidding, he'll discuss the changing offense in West Lafayette and why there is hope for the future.