Chris from SmartFootball answered some pressing Big Ten questions yesterday. He returns today with a focus on his boys, the Purdue Boilermakers. Again, a huge thanks to this excellent football mind for coming on TRE.

TRE: How has the Purdue offense, which has gained more yards and created more big plays than we at TRE expected, varied from the past Joe Tiller teams?

SF: Well many Purdue fans would refuse to answer this question on principle, as it's tough to point to positives when you're 1-4, though I'll try. The most obvious difference from the Joe Tiller offense (really, in later years, the Ed Zaunbrecher offense) and what Danny Hope and coordinator Gary Nord are doing is the increased use of traditional sets, primarily the I-formation with a true tight-end and fullback. Joe Tiller's original offense that he installed with Jim Chaney, now offensive coordinator at the University of Tennessee, was a "one-back" offense in the most literal sense: they had no two-back sets. This made sense for the time as the offense derived from Dennis Erickson's one-back attack that he had used in the pros and at Miami, and that Tiller learned at another of Erickson's stops, Washington State. The offense evolved a bit in Tiller's later years under coordinator Ed Zaunbrecher, formerly of Marshall, Florida, and Illinois, but it retained the same core structure.

It did not feature much if any of the "power" stuff that Nord has installed. Specifically, Purdue's offense previously was centered on the following: the run game was almost exclusively zone running based, including the inside zone and the outside zone, and the passing game was almost all straight-dropback passes. By contrast the current Purdue offense uses a ton of the "power" play - where the line "down-blocks," the fullback blocks the defensive end from inside to out, and the backside guard pulls and leads -- along with the toss-sweep and other base runs of the like. And the passing game has focused less on the true three-step and five-step dropback passing game that Purdue made famous, and more on passes outside of the pocket, like waggles (drop straight back then roll out), sprint outs (immediately roll-out), and bootlegs. 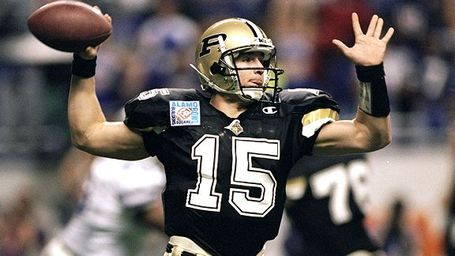 Extra halfbacks are for sissies...

On the whole I think these changes are positive because the offense needed diversity in both areas. The run game had become predictable, and the downfield passing game, which so often would shred inferior competition, would become completely stymied against good teams because (a) they could man up on all of Purdue's receivers, and (b) via the four down linemen and various blitz schemes, they could take target practice on Purdue's quarterback. The more diverse run game and the wider variety of dropback actions put the defense a little bit more on their heals. If I had an analogy for Purdue's current offense, I would actually pick maybe the Southern Cal offense of the last few years. Obviously Purdue lacks the kind of big play potential that unit has had over the years.

TRE: What was your biggest issue with Purdue's play calling Saturday?

SF: When your team turns it over six times, you're going to lose, whether you're running the wishbone or the spread, or your playcaller is Gary Nord or Bill Walsh. I personally didn't mind the aggressiveness at the end of the half (many of the turnovers occurred within the last two minutes of the half, and Purdue went from leading 21-3 to 21-16), but I suppose sometimes there is merit in just going to halftime with a lead.

The question then is whether turnovers are coachable? This is a more difficult question than initially appears. Purdue has been near the bottom of the country (rank in the bottom 10-15 teams) in turnover margin all season, and that was before the disastrous Northwestern game. But a lot of studies have shown that fumbling at least is a fairly random occurrence. As current Lions head coach Jim Schwartz (who has an econ degree from Georgetown) explained:

Similarly Phil Steele bases a lot of his bounce-back picks based on whose record seemed unduly bad because of turnovers - and he has a very good track record. More recently, Bill Connelly of Rock M Nation and Football Outsiders took a good look at the whole turnover phenomenon. He was able to assign a point value to turnovers - i.e. where on the field did they occur - based on the idea that not only are turnovers (fairly) arbitrary, but where they happen is even more arbitrary and can have a huge effect on the game. (Indeed, many Purdue fans have noted how it seems all the turnovers this year have come at particularly backbreaking.)

The upshot is that these numbers tend to make princes of frogs in some years and frogs out of princes, but over time they even out. As a guy who hopes Purdue has brighter days ahead than its 1-4 record indicates, this is appealing to me, and both Steele and Connelly have shown pretty demonstrably that this stuff does even out over time.

But if you look at the list of turnover margin you do tend to see a lot of teams that are sort of supposed to be there: Virginia Tech and Southern Cal near the top (and USC's yearly random upset loss almost always comes in a game where they are -2 or -3 in turnover margin), while teams like SMU and North Texas populate the bottom. So coaching can't be irrelevant, can it?

My sense is that interceptions are more coachable than fumbles, both for offenses and defenses. A Mike Martz sling-it team will throw more interceptions, and zone defense-based teams tend to intercept more passes because they have eleven defenders watching the ball, which is not the case with man-to-man. But what of Purdue, turnover machine? All I can say is that they are dead last in the Big 10 in turnover margin, and their number is more than double the next to last team. (Incidentally, that team is Michigan State, which last year had a great year by having a positive turnover margin, whereas this year has been disappointing, in many ways directly attributable to their now negative turnover margin.) And if Purdue wants to win any games - and if the new coaching staff wants to stick around while - they will have to get better in this area, either by coaching it better or getting luckier.

As with most fanbases, Purdue fans look at results. Like elected officials, coaches are not evaluated based on stochastic possibilities or counterfactuals. [ed note: Stochastic means random and non-determinative behavior...duh]

TRE: Is there a player on Purdue that you love watching for whatever reasons, someone who gives you hope for the following couple season?

SF: I think it's pretty obvious that the only player right now that can inspire any serious fear among other Big 10 teams is running back Ralph Bolden, who is currently ranked second in the Big 10 in rushing yards per game. He is only a sophomore, and has clearly been the highlight of the year for Purdue. That said, his production has trailed off recently, partially because he looks a bit dinged up due to the wear and tear and also because other teams are keying on him quite heavily. Charlie Weis basically announced that if Notre Dame stopped him they would win, and if they didn't they could very well lose. It was a bit more complicated than that but he was proven right.