It is a convenient, if clumsy, method of looking at a twelve game schedule. Break it into four-game thirds. This year's Iowa Hawkeyes's schedule is well suited for this. Iowa's first four games each added a level of difficulty, culminating with the rainy Saturday night in Happy Valley. 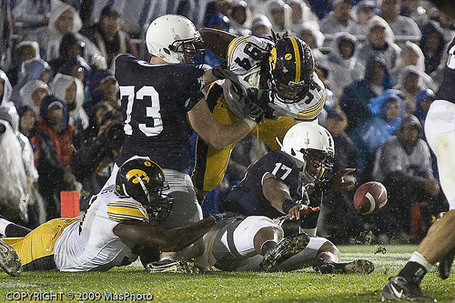 I fought champion Jack Thompson in a field full of mud.
'Till I felt my glove leather slip 'tween his skin and bone.
Rain poured through the tent to the canvas and mixed with our blood.
In the twelfth I slipped my tongue over my broken jaw.
I stood over him and pounded his bloody body into the floor.
Well the bell rang and rang and still I kept on.

Iowa's last four games include home games against Indiana, Northwestern and Minnesota and a road date against Ohio State. I was of this opinion before the season, and I've seen nothing to change my mind: those games are locks. Iowa will win the three home games. They will lose in Columbus. Sure, you can make an argument that this is the kind of special Hawkeye team that can win against the Buckeyes. You can also argue that Northwestern could rise up and punk the Hawks again. No. Barring substantial injuries, neither is happening.

What this means, is that Iowa's season will be determined by what occurs over the middle four-game third. After Iowa's dominating win over Arkansas State (I played outside after Iowa went up 21-7 early in the 3rd. Did I miss something?), all focus must rest upon the next three Saturdays. These games will determine whether Iowa goes to a BCS Bowl or the Alamo Bowl - it may also determine if Iowa is a Big Ten Champ. Here's a look at the next three games and what's on the line for Iowa.

Make sure to go back and submit your picks for Week 6 of the Obligatory Predictions Contest. Weekly winners get a chance to write 500 words on the site. NEW this year is our season long competition - win the whole damn thing and we send you something amazing.

Now the gray rain's fallin' and my ring fightin's done.
So in the work fields and alleys I take all who'll come.
If you're a better man than me then just step to the line.
Show me your money and speak out your crime.

Iowa has a more mature team. Iowa has a better team. Iowa should win this game. It's just not that easy though. Michigan is still wearing those winged helmets. They're still claiming to be the champions of the west. In truth, Iowa claims a robust .200 winning percentage against the Wolverines. That's right, 10-40-4. One out of every five, baby! (ed.note: Math is hard. See comments) Actually, if Iowa beat the Blue in this one, it will be the Hawkeyes third win over Michigan in the seven games this decade (the rotation prevented matchups in 2000, 2007, and 2008). That would tie the Hawkeyes all-time high for a decade. So yeah, Iowa always feels trepidation when Michigan rolls in, and all Michigan has to do is show up.

Another reason for fear: Iowa thinks it's seen this offense before. At his press conference, Coach Ferentz unleashed this beauty, "But philosophically it goes back to when we played Northwestern back in 2000. We came to the conclusion that as different as their attack was, we felt the best way to match up was to stand with our base personnel. Philosophically that's how we think, and we'll make our changes more on down and distance." 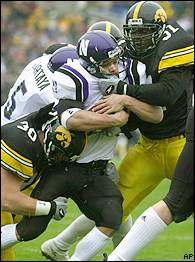 OK, that Northwestern team was a Big Ten co-champion; I recognize that. But if the Hawks think that they are going to handle the athleticism of Michigan in the same way that they handled the Wildcats (Iowa beat jNorthwestern 27-17 in 2000, keeping the 'Cats out of the Rose Bowl), they're wrong. A large part of the success of the Rodriguez system is speed everywhere. When teams face it for the first time, they struggle. Michigan didn't have speed last year. They have it now. Iowa is fast in the front four. Iowa is disciplined in the back seven. That's a polite way of saying that Iowa players use technique, strength and positioning to make up for less speed. There's nothing wrong with that. It can win you a lot of ball games. It also can get you beat if the players are both 1) confused by formations and motion that they have not seen and 2) slower than the men their chasing. If we see multiple shots of A.J. Edds and Pat Angerer turning tail and running toward the secondary, it's going to be a long night.

As I said in the Spring Preview of the Badgers, "when the rest of the country talks about Big Ten football, they think of power. Slow, plodding power. Slow, plodding, corn-fed, dairy-fed power. And while every other team in the league has at least flirted with opening up their offensive systems, Wisconsin has not." That's still true. John Clay will rumble, and victory in the game will be determined by Iowa's ability to stop him. I suspect that Ohio State will give a blueprint for that defense. I anticipate that Iowa will follow it.

Wisconsin is a good team - better than I anticipated. That said, I feel most secure about this game. Wisconsin is a good matchup for the Hawkeyes. Iowa can limit the traditional power running game and force a young quarterback to throw against a ball hawking secondary. That's the premise of the Iowa defense. Also, I still remember the way that Iowa's offensive line pushed around the front seven of Wisconsin last season. I anticipate that the Iowa running game will be big again.

Let me teach you a little something about the series. Since 1991, there has been one time that the road team has won (Iowa 21-7 in East Lansing in 1995). That's Home Team - 11, Road Team - 1. There were seasons where there the superior team gave a beatdown (given by Michigan State in 1999 and Iowa in 2002). There were games where the inferior team somehow rose up to steal a victory (like Iowa in 2000 and Michigan State in 2003). But in all but one of the games, the constant has been that the team in the dark jerseys gets a win. 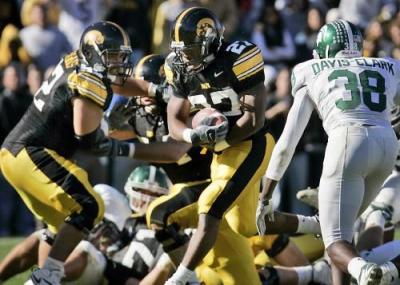 Jevon Pugh (Who? Exactly!) and the Hawkeyes had no business winning in 2007 either.

Now, I'm not a very superstitious person (ed. note: That's a bald-faced lie.). But, Bull Durham taught me to respect the streak. That's why I picked Michigan State to win this game in the Closing Arguments. That's why I still think that the Hawkeyes will lose this game. Iowa has the better team, but I don't know that it matters. This game's outcome was determined when the schedule makers set it in East Lansing.

So where does this all leave Iowa?

If the Hawkeyes can win all three of these games, they'll have a final record of 11-1 (7-1). If someone else can beat Ohio State (Wisconsin? Penn State?), Iowa will earn a share of the Big Ten crown and possibly go to the Rose Bowl. Iowa will need a three way tie to head to Pasadena. If not, Iowa will lose the tiebreaker to the Buckeyes. They'll be snapped up by the Orange or Fiesta Bowl and earn their second BCS bid of the decade.

If the Hawkeyes can win two of these games, they'll have a final record of 10-2 (6-2). Unless there is massive upheaval, it is going to take at least seven wins to claim the Big Ten crown. 10-2 Iowa will still be tempting for a BCS bid. The collapse of the Big 12 has really helped the chances of a second bid going to the Big Ten. 10-2 Iowa will definitely be in that discussion. Should they miss out on that, you can expect to see them in the Capital One Bowl.

If the Hawkeyes win only one of these games, they'll have a final record of 9-3 (5-3). That record screams for an Outback Bowl berth, but it will depend upon how the rest of the Big Ten sorts itself out.

Don't think it can't happen. You should be able to see how they lose each one. The defense can't control the Michigan spread. Michigan wins. The defense has to cheat too much to tackle Clay, and Scott Tolzien throws over the top to Nick Toon. Wisconsin wins. Michigan State wears green jerseys. Spartans win.

If this happens, Iowa will finish 8-4 (4-4). The season will be labeled a failure. Iowa will be in the Champs Sports Bowl or Alamo Bowl. No one will be happy. This isn't cool. I don't want to talk about this anymore.