For two quarters, last week's "Matchup of the Week" played out exactly the way I discussed. As I wrote:

On a realistic note, Greg Robinson will probably continue his "bend but don't break" defense (H/T MaizeandBrew) to protect Floyd/Cissy from giving up big plays to Dell, Cunningham, and Martin. Also, if the Wolverine LB's are continuously matched up with with crossing wide receivers, bad things will probably befall Robinson and co.

Then MSU went conservative and allowed the inept and overmatched Michigan offense to mount a vicious comeback. We learned two things about the Wolverines last week. First, they aren't there yet. The defense is a year or two away and the offense is susceptible to teams that can slow the run early. Second, the Michigan passing offense is almost always more effective when quarterback Tate Forcier can get out of the pocket.

But as Bama writes in his "Hitter" article, this can be a dangerous game for Iowa -

Michigan didn't have speed last year. They have it now. Iowa is fast in the front four. Iowa is disciplined in the back seven. That's a polite way of saying that Iowa players use technique, strength and positioning to make up for less speed. There's nothing wrong with that. It can win you a lot of ball games. It also can get you beat if the players are both 1) confused by formations and motion that they have not seen and 2) slower than the men their chasing.

Here's what you should be watching this weekend when Michigan lines up over the ball and the RichRod spread tries to comeback from last week's 28 yard rushing performance.

The most impressive thing about Forcier is his shifty playmaking ability while scrambling. He throws across his body accurately and he does this nifty move where he sprints toward the line of scrimmage as if to run, but whips the ball to a wide receiver instead. 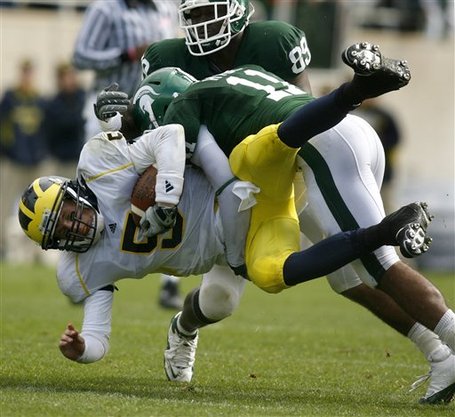 He also draws incomprehensibly bad intentional grounding calls and heaves the ball while falling down. It's a mixed bag, as expected for a frosh quarterback. Forcier's also not that fast, while is why I have to use the word shifty about a million times.

Unlike MSU with their hidden blitzes and snap count reading, Iowa won't try anything special to pressure Forcier. Frankly they don't need to with Clayborne, Ballard, and the rest of that vicious front four. There's a reason I love watching Iowa play defense - it may be a vanilla scheme, but everyone's a hitter and the pressure generated on straight drop backs is insane.

We all know what Iowa does to quarterbacks sitting helplessly in a pocket (Daryll Clark, avert your eyes). We also know that the key to Forcier's success is misdirection and playmaking on the run. The straight drop isn't going to work against a 4-3 with dropping linebackers, so the roll out will be key to keep Forcier from being hemmed into the pocket. RichRod got Forcier out of the pocket toward the end of the MSU game by rolling him to either side and bringing a halfback or tight end over to shield block.

The cold, wet conditions hurt the Wolverines in East Lansing. Not only was their run game stuffed by good Spartan line play, but the cut back was not an option on the wet field. The wide receivers didn't particularly enjoy the conditions, dropping five balls and slipping all over the place. Forcier went 17-32, but the rain and drops made about 6-7 of those incomplete. Weather in Iowa City on Saturday night? 38 degrees and wet from the afternoon showers. 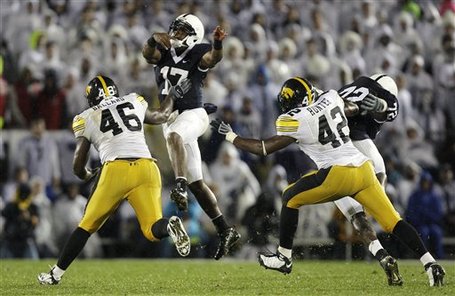 3rd Best Run Game in the Nation My Ass

Michigan State crushed the Spread run game through a couple different key schemes. First, they slanted their defensive tackles into whichever way the spread run was going, quickly closing any holes. Second, the MSU linebackers keyed on the quarterback run from the Zone Read, never allowing Forcier to pick up 5-10 yards from the misdirection.

This from the MGo Board -

...to really have a chance against Iowa, we're going to need to go to a lot of 4 WR sets (especially Trips) and that really puts the onus on the offensive line...which just had it's worst game of the season. We'll probably have to continue to roll protections instead of being able to drop back normally and cuts down half the field against a team that already plays good zone coverage. If there's no running game on Saturday, it could get rough.

It seems that MSU showed the rest of the Big Ten how to stop the Spread Run. But if there is anything RichRod loves doing, it's making adjustments. This sexy Saturday night game will give him a chance to show he learned something from the offensive struggles against MSU.

Kirk Ferentz is blessed with a cohesive ball-hawking unit that's licking it's chops at getting the opportunity to hit a 175 lb. frosh all night. Will Ferentz follow Dantonio's lead and slant his tackles inside the zone blocking to stop the run? Against the best defense he's ever seen, will Forcier show the moxie that's so far defined his performance?