Week 6 in the Non-Con: What I Want

Share All sharing options for: Week 6 in the Non-Con: What I Want

I want to see Indiana continue to play with the energy that has made them one of the pleasant surprises in the Big Ten this season.  Virginia is bad.  However, Al Groh teams win games.  Somehow.  Ask North Carolina.  I don't know if Indiana wins this one, but I want to see them put forward their A-Game.

I want to see the Wildcats pound the alma mater of this site's founders.  Most importantly, play a complete game, Wildcats.  Don't let them back in like you did Eastern Michigan.  Don't fail to show up like you did with Purdue.  The RedHawks are horrible (0-5, they've given up at least 29 points in each game).  Show us just how bad they are. 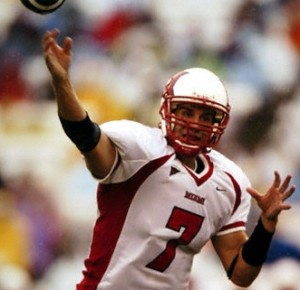 Where have you gone, Big Ben?  Oxford hasn't been the same since you left.

This is the most highly anticipated game of the Penn State season as they face their traditional arch-rival: the Panthers. Wrong Panthers?  Well, then don't get anybody hurt.  And take it easy on Jake.  After all, he is the only Hawkeye quarterback to lose to Penn State this millennium.

I want three wins and two blow-outs.  This is very possible.

I expect Al Groh to beat Indiana on his way to 6 wins and another year at the helm of UVa.  I hope I'm wrong about this.

The Big Ten is 25-9 (.735) out of conference.  The league is 5-7 against BCS Conference teams (plus Notre Dame). Purdue's loss to Notre Dame guarantees that the Big Ten can finish with no better than a .500 record against the other BCS schools.  The league has two losses to non-BCS teams (Northern Illinois over Purdue and Central Michigan over Michigan State).