Monday night, the 2009-2010 Big Ten basketball season got under way with a crushing performance by Ohio State. Yes, they only beat Alcorn State.  The important thing is that the season is underway.  By this weekend, every team will have tipped off.  In an attempt to provide great insight troll for hits stop thinking about Ricky Stanzi's ankle, I am starting a new recurring (i.e. it will happen as often as I want it to) feature at The Rivalry, Esq.: The Starting Five.  In it, we'll discuss five things about our hoops teams.

Since you probably think that we know nothing about basketball, we felt that it was important to look for an outsider's insight into the state of the conference.  Chris from Blogging the Bracket, an outstanding SBNation college basketball blog, was kind enough to answer our initial Starting Five questions about the Big Ten.

1) Let's start with your predictions.  Winning the league, you have MIch-----HOLD ON!  WAIT A MINUUTE!!!  You have Northwestern making the Field of 65.  The Wildcats are, of course, the one BCS conference school that has never made it to the Big Dance.  Ever.  Ever.  Ever.  Ever.  Defend your projection. 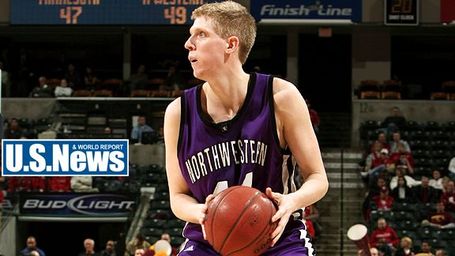 This is not making me hate Northwestern less.

They were so close last season, and even though they lost Craig Moore, just about everyone else--led by Kevin Coble and Michael Thompson--is back.  However, a lot of the supporting cast needs to step up.  Wins in East Lansing and West Lafayette last season show they can win big games, but they have stop dropping games at inopportune moments. I feel they're due, especially as the two teams closest to them in the league, Penn State and Wisconsin, lost more experience after last season. 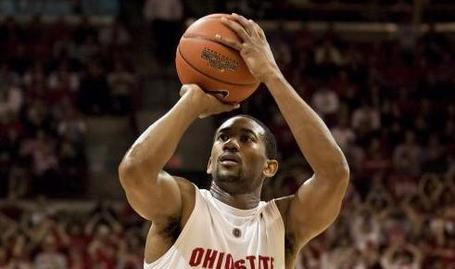 If Lighty stays healthy, Ohio State will make some noise.

2) At the top, it sure looks like it's Michigan State, Purdue, and then everyone else.  If a third team was to rise up and win the league crown, who would it be?

Ohio State.  Getting David Lighty back from injury will help them out a lot, and Evan Turner could be an even more dangerous player at the point, especially since managed the second triple-double in school history in his first game starting at that position on Monday night.  Sure, the opener was against Alcorn State, but the Buckeyes looked like a well-oiled machine out there, especially when compared to the other BCS level teams in that played that night.  If they can keep that up, it will be a three team race.

3) In your Pre-Season bracket projection, you have 7 Big Ten teams making the Field of 65.  Is it safe to say that after a down couple of years, the Big Ten is back?

The Big Ten is definitely back.  The league is frighteningly close to having every single team be competitive night in and night out, but I'll talk more about that when I get to your questions on Indiana and Iowa, as they're the current problem children.  If the Hoosiers and Hawkeyes can get back to respectablility in a year or two, and Northwestern and Penn State, the two weakest programs traditionally, can keep their current level of competitiveness, the conference could be the most balanced in the nation.

4) How far away is Indiana from a) competing for an NCAA Bid; and 2) winning a Big Ten title? 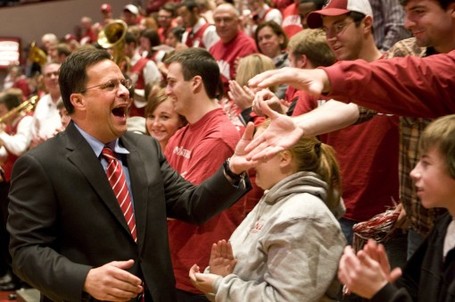 I think they're a year away from getting an NCAA bid, thanks to the youth of the roster.  Eleven underclassmen is a staggering total, so you have give them, especially the six freshmen, a year to get acclimated to the league and to each other.  In terms of contending for the league title, I'd say it's going to take Tom Crean at least another two or years or so of recruiting to get them in a position where they can make a run.

5) Is this the year that the Big Ten finally wins the ACC/Big Ten Challenge?

The Big Ten has an excellent shot, as the ACC should only dominate in three contests--Maryland-Indiana, Virginia Tech-Iowa, and Duke-Wisconsin, and those are all in the Midwest.  In the other games, I'd say the Big Ten team has at least a slight advantage, except for Michigan State-UNC, which is a push.

6) I was very surprised when I saw that you have Iowa pegged for a strong 11th Place finish.  Then I saw that it was 11th in the Big Ten, not the nation.  How would you rank Iowa versus the other last place teams in the 6 BCS conferences?

The Hawkeyes could very well be the worst team in the Big Six conferences, though Providence and DePaul in the Big East will push them. Like Indiana, they're young, but Todd Lickliter's recruits aren't as heralded as Tom Crean's are.  Jake Kelly's transfer to Indiana State is painful because he really came into his own last year, and Jeff Peterson heading to Arkansas means Lickliter has to find another point guard. Cully Payne could be a good one, but he is one of those freshmen, so there will be an adjustment period.  But it's not like the cupboard is completely bare, as Matt Gatens, Anthony Tucker, and Jarryd Cole (if he stays healthy) are all capable players. 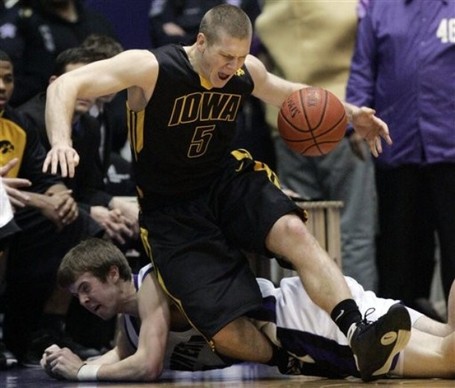 You hear that?  Iowa has "capable players."  That's high praise!

The Rivalry, Esq. thanks Chris for answering The Starting Five Questions about Big Ten basketball.  Here's to a great Big Ten season.