Share All sharing options for: The Rivalry Is Watching You: Wisconsin DE O'Brien Schofield v. Indiana

I am watching Wisconsin's All American defensive end O'Brien Schofield this week. How would Indiana protect Ben Chappell from this TFL demon? Would Schofield be tested by the tricky playcalling of Bill Lynch? How much NFL talent does this hybrid DE/OLB possess?

Wisconsin doesn't alter their defensive scheme the entire game, showing little fear of the Indiana attack. Schofield plays in the three point position the entire game, coming off the right side of the Wisconsin 4-3. The Badgers run a stunt maybe twice the whole game, showing tremendous confidence in their cornerbacks playing one on one, even if this confidence wasn't totally in line.

Schofield (OS) will be taking on #76, big James Brewer, most of the day. Early on, the Hoosiers run away from OS, but get stuffed by JJ Watt and the solid Wisconsin LB corp. The Badgers force a punt, only to watch the punt returner muff the catch. Indiana throws a couple quick passes and it's 7-0.

Wisconsin evens the score at 7 and OS lays out the kick returner. What is the star defensive end doing on the kickoff team? The Badgers get another stop and we see Indiana double teaming OS on every single play. On one play, the Hoosiers hit OS high with an OL and low with a cut block. Looks illegal and painful. Indiana punt and Wisconsin drives down for a field goal, 10-7.

Indiana hasn't generated a single thing offensively yet. The base of their problems lies in Wisconsin's ability to jam the Pistol run game. It looks like basic man blocking and the running back is coming from 7 yards off the ball; Wisconsin is winning most of those one on one battles. IU runs at OS for the first time - Schofield holds up Brewer and helps stuff the play. Wisconsin takes over after a Ben Chappell INT and runs over IU for a TD. 17-7, Badgers.

OS is beating Brewer on angles in the run game, firing himself low into double teams and around #76. OS gets his first tackle, well maybe a half tackle, but Chris Borland cleans up nicely. Indiana punts and Wisky scores AGAIN. 24-7 and I'm worried this could be about it.

Whoops, spoke too soon. Chappell makes two deep throws, good for about 80 yards combined, and the Hoosiers make it 24-14 with a few minutes to go in the second quarter. OS is being doubled one every play and then Brewer even gets a pancake block, pushing OS down and laying on him. Send that tape to the NFL scouts James!

Wait a minute James, maybe hold off on sending that tape. After stopping another OS spin move, Schofield goes to his bread and butter: power and speed off the edge. OS blows by Brewer and gets a big sack to end the last Hoosier drive before the half. He baited James and used his 4.6 speed and agility to get to the QB. Beautiful. Halftime.

Some clever playcalling by IU to begin the half. Screens to the middle of the field, quick slants...IU is moving the ball, chipping and doubling OS at every chance. Lynch has also made an adjustment at the half, the mark of a good coach I might add. Seeing the off tackle Pistol running wasn't working, he switches to simple dives with Bryan Payton, who gets 7 yards a pop as the Badger DT's are blown off the LOS. The second pass play IU runs, OS beats Brewer like Belushi destroying a guitar, but barely misses a sack.

Quick aside here - Schofield gets major plus points here for his on-field IQ. When he recognizes that a power rush won't work, because of a rollout or double, he instantly shuffles back into the middle of the field to look for dump offs or QB scrambles. Very mature move for a pass rusher. 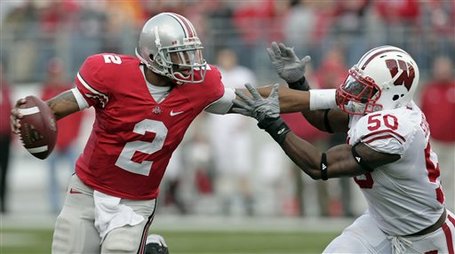 Indiana is driving deep into Wisky territory until Schofield's second impact play ends the drive. He uses a combo of speed and power to push past Brewer's outside shoulder and hits Chappell as he throws - the ball flutters into the arms of a waiting Borland. The camera zooms in on Schofield's fashionable fohawk on the sideline.

Lynch learns his lesson and spends the next possession doubling Schofield. This fails on the first running attempt and OS blows up a run. IU tries a reverse (damn Bill Lynch, he'll try anything) and Schofield holds his ground, showing that tremendous sideline to sideline speed and almost catching the speedy IU receiver. For the first time we see a negative in Schofield's repertoire of pass rush moves - the spin move is completely ineffective and slow, much different than the vicious whirling spinner of Greg Jones. Every time Brewer sees OS put on the spin cycle, he simply pushes the body of OS and neutralizes it. In the meantime, IU punts and it's still 24-14.

Wisconsin spent the rest of the game giving up deep passes to IU and trying to blow leads. To the conclusion!

Game Stats: 1 Sack, 3 QB pressures (one which directly led to a pick), 1 tackle...Pancake blocked once...

Wisconsin Rush Defense in the Big Ten: Allowed no 100 yard rushers...Allowed no team to rush for 100 yards...70 ypg rushing allowed...

Impression and NFL Draft Discussion: OS is a true pass rusher, as the TFL's and high number of sacks suggest, but is quick enough to play outside linebacker. His speed off the edge, combined with excellent agility, make him a scary figure to block one on one. Agility allows him to dip below the hands of offensive lineman. Loves exhibiting 4.6 speed and really pumps his arms and legs to get leverage. Wasn't asked to do much pass coverage against IU, but the one time he dropped into a zone, got physical with a receiver instantly. Truly a defensive leader, as some pre-game inspirational yelling suggests, and obviously loves screwing up offensive gameplans with his individual skill. Projected in the third round of the NFL Draft and I'm sure some team can make room for a 6'2'' 250 lb ball of energy with a great attitude. Does have a bit of the Jared Allen "always moving, always fighting" on-field personality, but is much smoother.